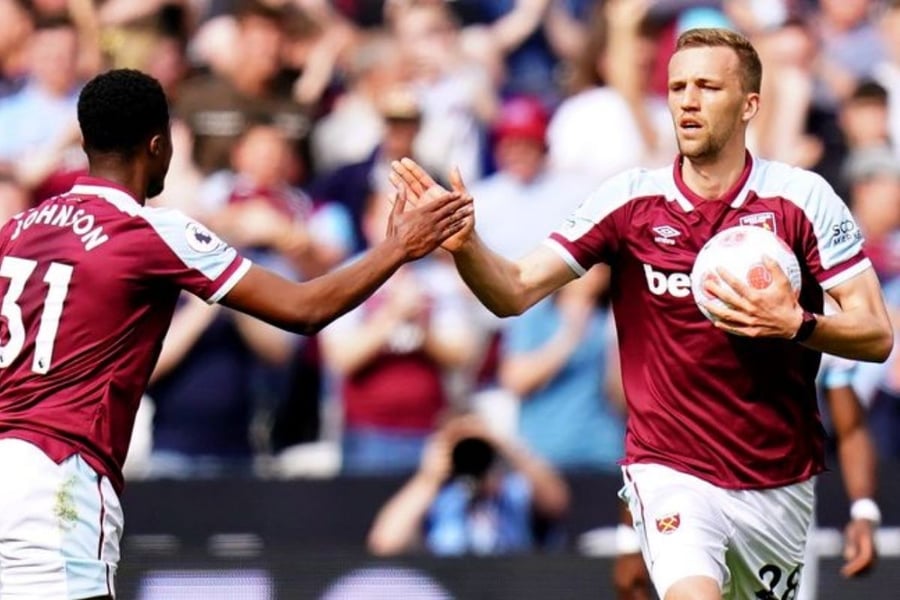 Dutch forward Wout Weghorst's first-half strike was cancelled out by Tomas Soucek's goal to end the game at 1-1 as West Ham United played out a draw against coachless Burnley on Sunday.

Soucek pounced to level the scores after a curling free kick by Manuel Lanzini glanced off Weghorst and into his path in the 74th minute to deny Burnley caretaker Mike Jackson the first win after they sacked long-serving boss Sean Dyche on Friday.

The result also denied 18th-placed Burnley the opportunity to close the gap on Everton above them to one point, heaping the pressure on the team with seven matches left in the season to avoid the drop to the second-tier Championship.

West Ham are seventh with 52 points after 33 games but David Moyes's side will be slightly disappointed that they were unable to claim the win that would have boosted their chances of playing in Europe next season.

Burnley grabbed the lead shortly after midfielder Ashley Westwood was taken off on a stretcher following a serious right leg injury, as Weghorst rose highest to nod in a rebound after Jay Rodriguez headed onto the crossbar from a corner.

The visitors then squandered an opportunity to double their advantage as Maxwel Cornet dragged his penalty wide following a staggered run-up, having won the spot-kick after a challenge by goalkeeper Lukasz Fabianski in the box.

"I thought at the end it's a good point for us," Jackson said. "First half we did really well, got a goal in front, but then we had that penalty miss and I think sometimes that just stays with the group a little bit.

"In the second half we rode our luck at times but it's a terrific result."

"We showed the character to come through and get a point. It's a foundation. Everyone was looking to see how we reacted and it is something for us to build on. A point in the right direction," Pope said.

"West Ham are a top team. It's never an easy place to come to and it's good to play my part."