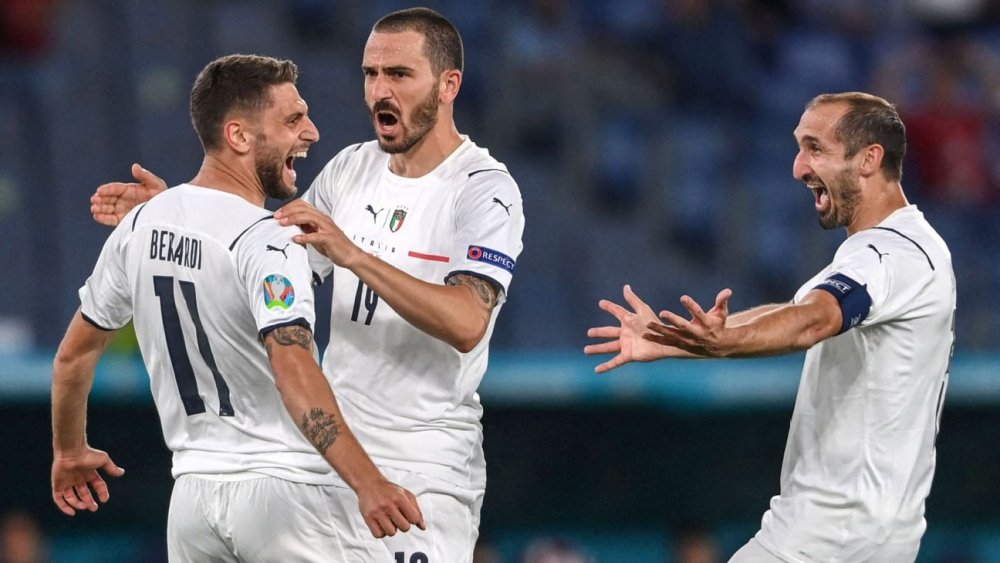 Italy got their Euro 2020 campaign off the mark with an impressive 3-0 win over Turkey in the opening match for the postponed continental tournament in front of their home fans in Rome on Friday.

For the European championship that kick-off in eleven venues in eleven countries from June 11 to July 11, Italy really got off in a free-scoring flare.

Playing their first major tournament in five years after failing to qualify for the 2018 World Cup, all the goals came in the second half in front of a Stadio Olimpico that was filled to a quarter of its capacity.

Merih Demiral's own goal put Italy ahead before Ciro Immobile and Lorenzo Insigne netted for Roberto Mancini's side in the Group A opener.

The win capped an emotional night in the Italian capital which saw 16 000 fans return to the Stadio Olimpico.

"It was important to start well in Rome and I think it's a satisfaction for the public and for Italians," said Mancini, whose side are now on a 28-match unbeaten run.

"There was a lot of help from the crowd. It was a beautiful evening, I hope there are many others, but there are still six more for Wembley."

"We were hoping for another result, but Italy was dominant," said Turkey coach Senol Gunes.

"The first goal changed things in the second half and we lost control of the game."

There was a party atmosphere, with a spectacular sound and light show and firework display before kick-off for the opening of the month-long 24-team event, which will be played across 11 countries.

There was a performance by the Italian National Police orchestra, a parade of huge inflatable balloons on the pitch, tenor Andrea Bocelli sang 'Nessun Dorma' before a virtual performance from Martin Garrix, Bono and The Edge.

Former Italy World Cup winners Alessandro Nesta and Francesco Totti, who played for Lazio and Roma during their careers at the Stadio Olimpico, carried the ball to the centre of the pitch before kick-off.

All Three Attackers Were On Point

On the pitch, Italy dominated early on with a three-man of Ciro Immobile, Lorenzo Insigne and Domenico Berardi.

Immobile had several near misses in the first half, coming up against a solid Turkey defence who held their own.

Turkey could also thank goalkeeper Ugurcan Cakir for pulling off a big save on 23 minutes, tipping over Italy captain Giorgio Chiellini's powerful goal-bound header off an Insigne corner.

Italy finally got on the scoreboard eight minutes after the break when the unfortunate Demiral found himself in the path of a Federico Berardi cross for Immobile, the Juventus defender bundling the ball into his own net.

Leonardo Spinazzola had a chance for a second minutes later, with Immobile sending the rebound wide.

Immobile finally got his goal, his 14th for Italy, and first in a major tournament, in the 66th minute, scoring from a rebound after Cakir had saved from Spinazzola.

And Insigne curled in the third with 11 minutes to go.

Sassuolo winger Berardi had a role in all three goals, with Italy scoring three for the first time in a European Championship match.

"We struggled at the start, we tried to accelerate but we hit a wall," said Immobile.

"In the second half, they were a little more tired, they tried to rush us but the spaces opened up, and we saw our quality at that time."

Gianluigi Donnarumma was largely unworried in the Italy goal apart from a dangerous Burak Yilmaz cross after half an hour and a solo run by Cengiz Under after coming off the bench after the break.

"From a tactical point of view, Italy was superior," said Gunes.

"Italy mastered the pitch and the ball. They suffocated us with pressing and high pace, and they took advantage of playing at home.

Italy, looking for a second European title after 1968, next play Switzerland in Rome on Wednesday, with 2008 semifinalists Turkey taking on Wales in Baku.