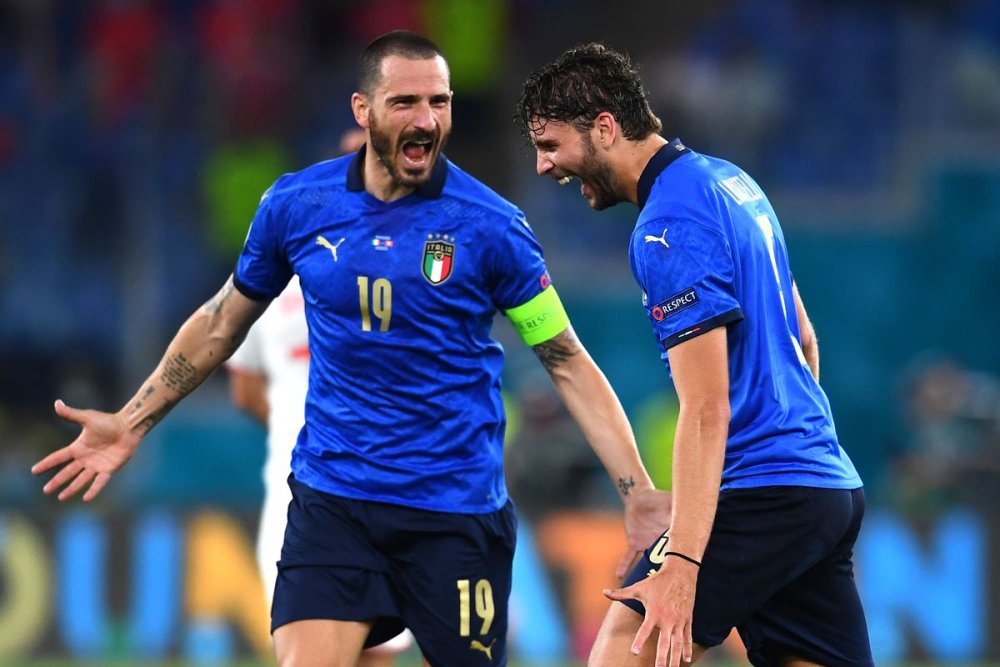 Italy became the first team to reach the knockout stage of Euro 2020 as midfielder Manuel Locatelli scored twice in a 3-0 win over Switzerland in Rome on Wednesday, while Wales moved to the brink of joining them by beating Turkey.

The Azzurri, now unbeaten in 29 matches and having won their last 10 games without conceding a goal, sit first in Group A and are guaranteed a top-two finish and last-16 berth.

"We played well, we wanted to win at all costs," Italy coach Roberto Mancini told RAI.

"They started well, it was not easy to win a second game in five days."

Mancini's men, looking to win Italy a second European title after their sole success in 1968, host Wales in their final group game on Sunday, with the top spot up for grabs.

A new star, Locatelli, shone for the Italians at the Stadio Olimpico, netting a double before Ciro Immobile's late third.

Captain Giorgio Chiellini had an early effort ruled out by VAR for handball before the 36-year-old defender was forced off with what appeared to be a thigh injury.

But the hosts always looked the more dangerous side and took the lead in the 26th minute.

Locatelli played a wonderful volleyed pass to his Sassuolo teammate Domenico Berardi on the wing, who powered to the byline and picked out Locatelli for a simple tap-in.

The three points and a place in the knockout phase for the fourth straight European Championship were all but secured less than seven minutes after the interval when a flowing move ended with Locatelli driving a left-footed shot into the bottom corner from outside the box.

Immobile had wasted a couple of earlier chances but did grab his second goal of the tournament in the 89th minute, curling a low effort past Swiss goalkeeper Yann Sommer.

Switzerland will now likely have to beat Turkey in Baku on Sunday to reach the next round.

After drawing 1-1 with the Swiss in their opening Group A game, Wales now have four points from two matches after goals from Aaron Ramsey and Connor Roberts saw off a disappointing Turkey 2-0.

"You'd like to think so, but we'll have to wait and see," said Wales captain Gareth Bale when asked if his team had done enough to get through.

"If you'd offered us four points at the start we would've bitten your hand off."

Senol Gunes' side, roared on by the majority of the crowd in Azerbaijan, have lost both of their games without scoring and face a mountain to climb if they are to qualify.

Wales, semifinalists five years ago, should have won more convincingly, but wasted several chances including a second-half penalty which was blazed over by Bale.

Up to 4 000 Turkish fans travelled for the game, including President Recep Tayyip Erdogan, but Wales immediately were on the front foot and Ramsey wasted two excellent chances early on.

He made no mistake three minutes before the break, though, chesting down Bale's pass and slotting home.

Bale, whose future at Real Madrid is uncertain, won a penalty just after the hour mark but was uncharacteristically wayward from the spot.

Robert Page's Wales grabbed the second goal their performance deserved in stoppage time, as Bale danced through and teed up Roberts to sweep into the net.

In the first match of the day, Russia defeated neighbours Finland 1-0 in Saint Petersburg courtesy of Aleksei Miranchuk's goal just before halftime to pick up their first points in Group B.

It blows open the section after Russia lost 3-0 to Belgium in their opening game at the weekend. Finland had beaten Denmark 1-0 in Copenhagen on Saturday, a game completely overshadowed by Christian Eriksen's cardiac arrest.