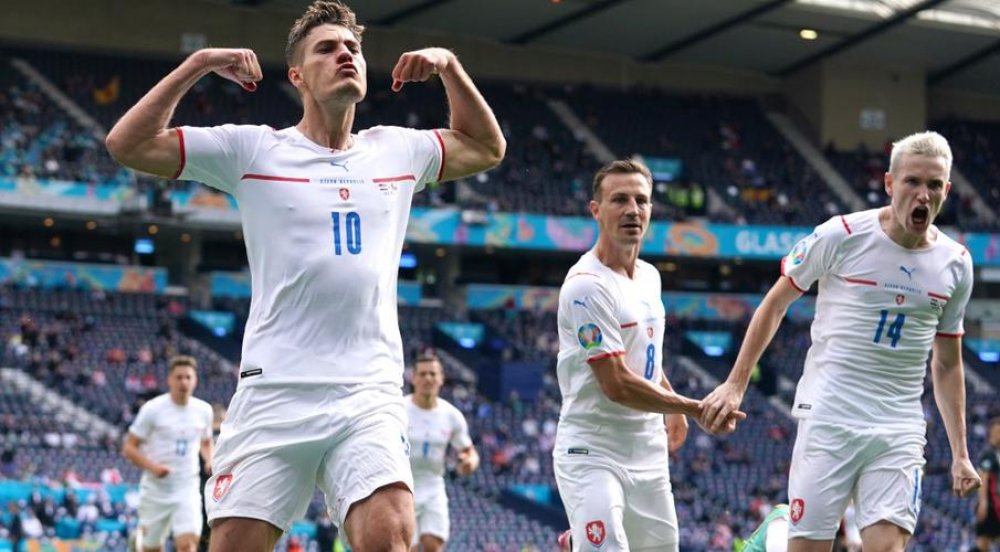 Patrik Schick is topping the Euro 2020 goalscoring charts with his third goal of the tournament as the Czech Republic held Croatia  to a 1-1 draw in Glasgow to edge towards the last 16.

Schick broke Scottish hearts on Monday with two goals to beat the hosts at Hampden Park 2-0, including an incredible strike from nearly 50 metres that will go down as one of the best ever in the European Championship history.

His job was easier against the Croatians from the penalty spot to open the scoring, but Ivan Perisic's stunning strike early in the second half maintained Croatia's chances of reaching the knockout stage.

The World Cup finalists will have to beat Scotland on Tuesday to either pip the Czechs to second place in Group D or most likely head through as one of the four best third-placed sides.

The Czechs move a point ahead of England at the top of the group ahead of the Three Lions' grudge match with Scotland later on Friday.

Schick then had a glorious chance from Coufal's cut-back, but from a tenth of the distance from where he scored four days ago, he failed to make a sweet connection and Dominik Livakovic easily saved.

Croatia upset Argentina and England on their road to the final in Russia three years ago, but have looked a pale imitation of that side so far this tournament without Ivan Rakitic and Mario Mandzukic, who have retired from international football.

The ageing Luka Modric and Perisic remain their nation's biggest threats and a well-worked corner between the pair found the Inter Milan winger, but his shot was too close to Tomas Vaclik.

Dejan Lovren had been recalled by Zlatko Dalic in two changes from a 1-0 defeat by England on Sunday, but the former Liverpool centre-back was penalised in highly controversial circumstances to gift the Czechs the opening goal.

Lovren's elbow caught Schick as the two challenged for an aerial ball into the box.

The Bayer Leverkusen forward was left with a bloodied nose and while he received treatment, Spanish referee Carlos del Cerro Grande was advised to view the incident again by VAR.

There appeared to be no intent by Lovren, but the official still pointed to the spot.

Schick sent Livakovic the wrong way to move ahead in the race for the Golden Boot.

Ante Rebic had a great chance to level immediately, but summed up Croatia's half when he sliced horribly wide.

Dalic had seen enough as he made two changes at the break with Bruno Petkovic and Luka Ivanusec introduced.

But it was Croatia's reliable source of goals in major tournaments that came up with the moment of magic needed to launch their tournament less than two minutes after the break.

Perisic cut inside onto his weaker right foot to blast into the top corner for his eighth goal at a European Championship or World Cup.

Croatia had the better chances to snatch all three points as Nikola Vlasic fired inches wide before Tomas Kalas produced a last-ditch block to deny Petkovic in the final minute.

Silhavy's wild celebrations at the final whistle showed who were the happier side with a point, with the Czechs likely to have already done enough to secure a place in the last 16 thanks to their four points.