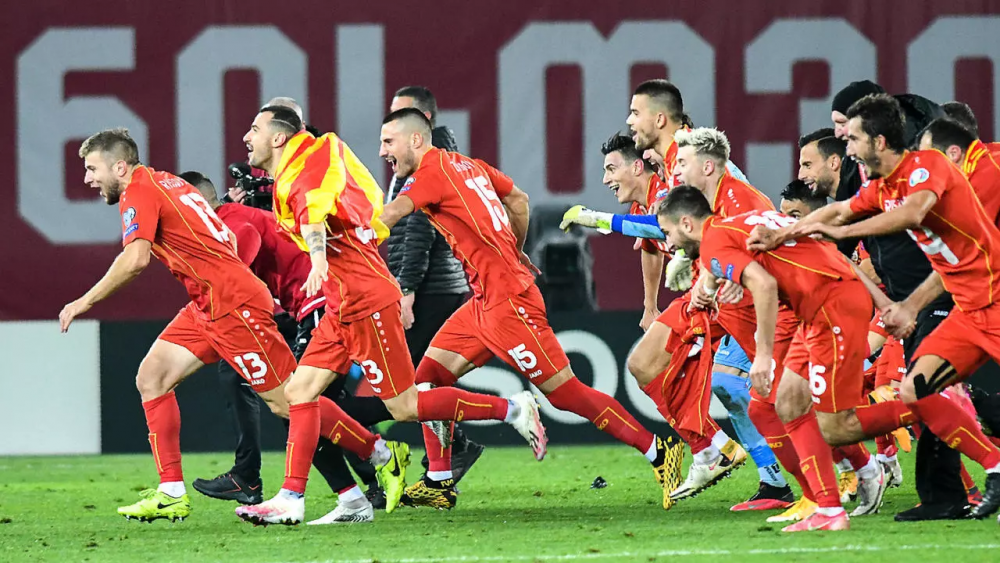 North Macedonia qualifies for a major tournament for the first time in their history after a Goran Pandev goal gave the Balkan nation a 1-0 win away to Georgia in their Euro 2020 qualifying play-off final on Thursday.

AllNews understands that North Macedonia will go into Group C at the finals alongside former winners, the Netherlands, Austria, and Ukraine.

The schedule indicates that North Macedonia will make their debut against Austria in Bucharest on June 13 next year.

Pandev scored the only goal of the game in the 56th minute in Tbilisi, allowing the country who sit 65th in FIFA's world rankings to secure their place in the finals of the postponed European Championship, which is now set to go ahead in June and July next year.

North Macedonia, who played their first official game in 1993 following the break-up of the former Yugoslavia, had never come close to reaching a major tournament before but were given a chance after the new UEFA Nations League offered a route to Europe's traditional minnows.

One qualifying place was set aside to a team from the bottom League D of that competition, and North Macedonia topped a group with Armenia, Gibraltar, and Liechtenstein before beating neighbors Kosovo 2-1 in Skopje in the playoff semifinals last month.

Georgia, ranked 86th by FIFA, was also aiming to reach their first major tournament after winning 1-0 in their semifinal against Belarus, although they were without some key players due to injury and positive coronavirus tests, including the playmaker Giorgi Chakvetadze of Belgian side Gent.

The sides had met twice in Nations League fixtures in the past two months, with North Macedonia coming from behind to draw 1-1 each time.

This time, though, they shaded the victory thanks to Pandev, the 37-year-old Serie A veteran who is a legend in his home country.

The goal was the result of some lovely play between three Italy-based players, with Napoli's Eljif Elmas and Udinese's Ilija Nestorovski combining on the edge of the area to set up Pandev, and he took a touch before scoring with a dinked finish.

A member of Jose Mourinho's Inter Milan side that won the Champions League in 2010, Pandev is now with Genoa and is his country's all-time top goal-scorer. The remaining three qualifying berths at the 24-team Euro will be decided later on Thursday as Hungary host Iceland, Northern Ireland take on Slovakia and Serbia face Scotland in the other play-off finals.

The European Championship was due to take place in June and July of this year before being postponed because of the coronavirus pandemic.

It is set to be played in 12 cities across the continent, with the semifinals and final at Wembley in London