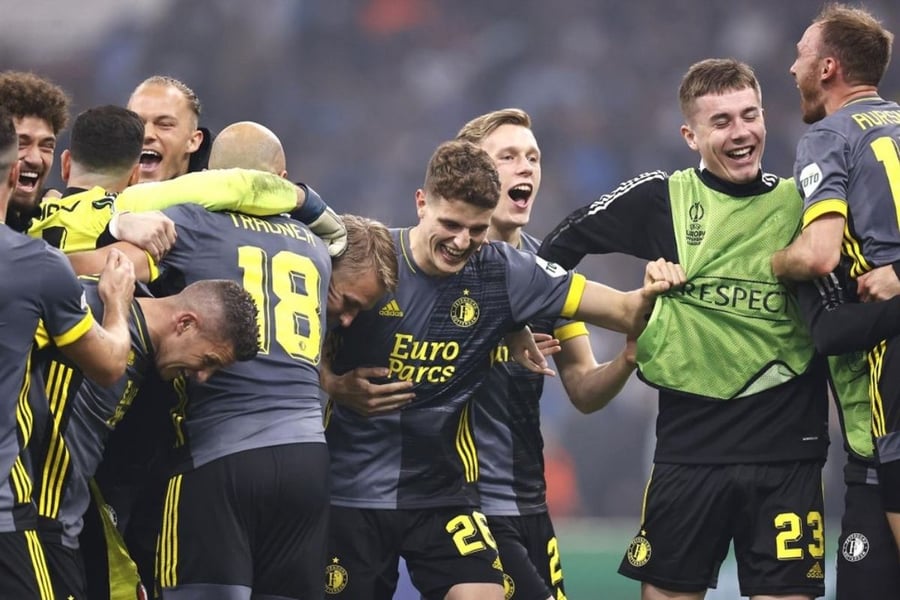 Dutch giants Feyenoord are through to their first European final in two decades after holding Marseille to a 0-0 draw in France on Thursday to win their Europa Conference League semifinal 3-2 on aggregate.

The Dutch club made good their victory in the first leg last week in Rotterdam to set up a clash with Jose Mourinho's Roma in the inaugural final of the new third-tier European competition.

That match will be played on May 25 in the Albanian capital Tirana, 250 kilometres away from where Feyenoord began their campaign against Drita of Kosovo in the qualifying rounds last July.

Marseille's hopes of turning the tie around were dealt a huge blow when playmaker Dimitri Payet was forced off injured before halftime at the Velodrome.

The home side were deprived of a part of their support with the stadium closed at one end by UEFA as punishment following the trouble that marred their win over Greek club PAOK in the quarterfinals.

They rarely really looked like scoring after losing Payet and they are left to focus on their quest to finish in the top three in Ligue 1 and qualify for next season's Champions League.

Feyenoord failed to score in a game for the first time since January but did not need to after a Cyriel Dessers double and a deflected Luis Sinisterra strike gave them victory in the first leg.

The match against Roma will be their 19th game in the competition this season and they will be aiming to win their fourth European trophy.

The first Dutch club to win the European Cup when they beat Celtic 2-1 in 1970 final, they then won the Uefa Cup in 1974 and again in 2002 when they defeated Borussia Dortmund 3-2 in their own De Kuip stadium.