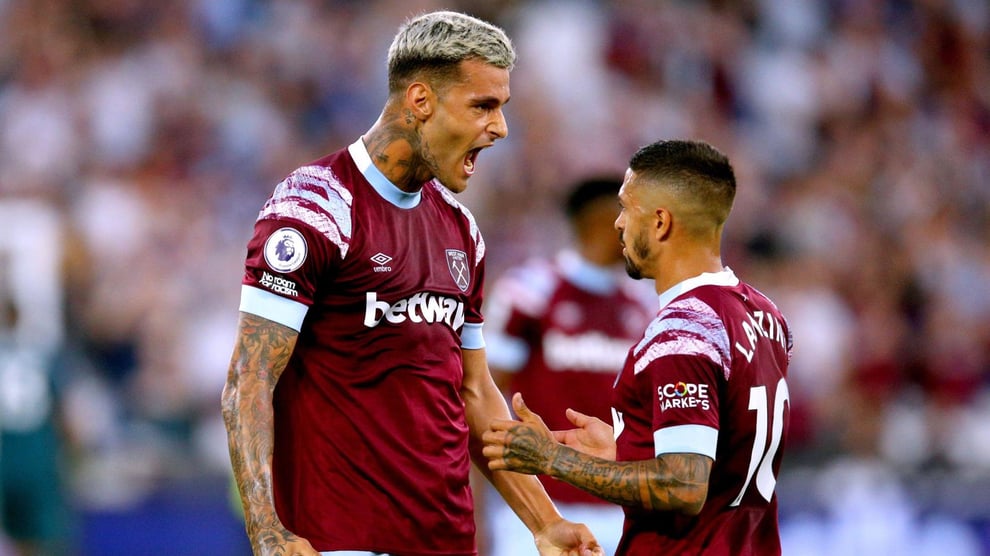 West Ham, who made the Europa League semifinals last season, went into the game after back-to-back losses in the Premier League to Manchester City and Nottingham Forest.

But Italian international Scamacca, signed for £30 million from Sassuolo, eased the nerves by finding the target in the 23rd minute after being teed up by another new signing, Maxwel Cornet.

Jarrod Bowen added a second in the 64th minute before Viborg pulled one back through Jakob Bonde five minutes later.

Twelve minutes from time, substitute Michail Antonio scored a third for West Ham to put the Londoners on course for a place in the group stage.

"Strikers are judged by goals so to get off the mark quickly is big and there's plenty more to come from him."

Villarreal, who were Europa League champions in 2021, overcame an early shock to defeat Hajduk Split 4-2.

Stipe Biuk gave Hajduk a second-minute lead but the Spanish side quickly recovered and were 4-1 ahead by the break.

Jose Luis Morales, with a brace, a Marko Livaja own goal and a Gerard Moreno strike in first-half stoppage time put Villarreal in charge.

A Marco Fossati penalty five minutes from time, however, gave Hajduk a glimmer of hope of overturning the deficit in next week's second leg.

Anderlecht, 32-time Belgian champions, came away from Young Boys in Switzerland with a 1-0 win secured by a Hannes Delcroix goal just before the hour mark.

Former Arsenal star Mesut Ozil was left on the bench as his Turkish side Basaksehir were held 1-1 by Antwerp in Istanbul.

Cologne, third in the Bundesliga after two games, lost 2-1 at home to Fehervar of Hungary.

Florian Dietz put the German side ahead after 15 minutes but they were reduced to 10 men five minutes later when Julian Chabot was red-carded.

Fehervar pounced with Budu Zivzivadze and Palko Dardai giving them the lead before the break.

In the Europa League, Hearts gave up a 1-0 lead to lose 2-1 at Zurich but will start the second leg as favourites next week in their first European tie in six years.

The Scots went ahead through a Lawrence Shankland penalty after a foul on Australian international Nathaniel Atkinson.

However, the Swiss champions hit back with goals inside the space of two minutes.

Adrian Guerrero levelled with a 32nd-minute volley before Blerim Dzemaili added a second after being left unmarked.

"I thought we were outstanding tonight," Hearts coach Robbie Neilson told the press.

"We've come to the Swiss champions, who had a magnificent season last season with international players."

Ferencvaros of Hungary were the biggest winners in the Europa League as Adama Traore scored twice in a 4-0 defeat of Ireland's Shamrock Rovers.

Former Bournemouth and Watford striker Josh King scored an eighth-minute goal to help Fenerbahce to a 2-0 win at Austria Vienna.