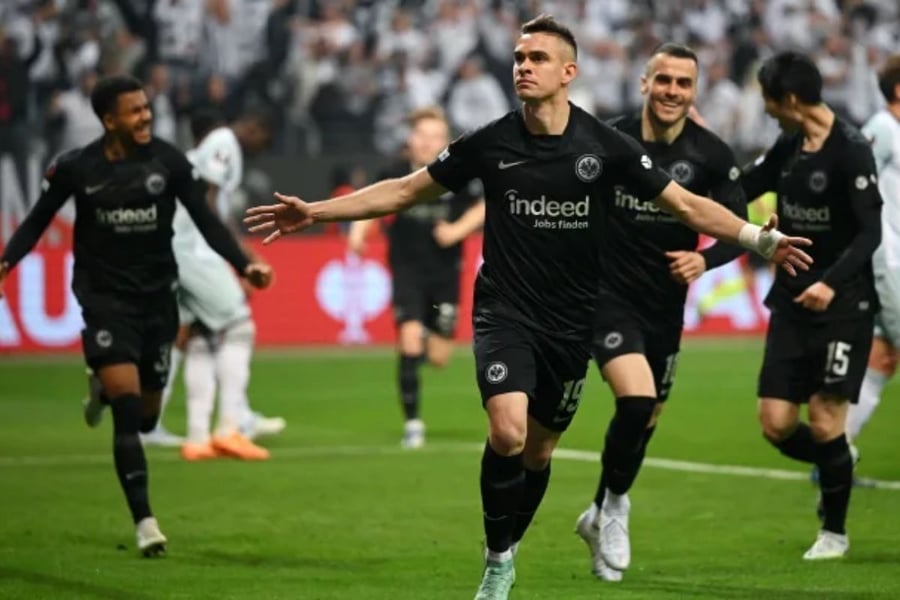 German side Eintracht Frankfurt reached their first European final for 42 years after a 1-0 home win on Thursday over 10-man West Ham sealed a 3-1 aggregate victory in their Europa League semifinal.

West Ham had left-back Aaron Cresswell sent off early on and Hammers manager David Moyes was also dismissed from the sidelines with 12 minutes left for kicking a ball at a ball boy.

"Really disappointed. Things didn't go for us on the night," Moyes told the press.

"Small things didn't happen but I am really proud of the players.

"How they played with 10 men was fantastic. They stayed in it."

Colombia striker Rafael Borre netted the first-half winner on the night to book Frankfurt a place in the Europa League final on May 18 in Seville against Scottish giants Rangers.

They are also now just one win away from qualifying for the Champions League for the first time since losing the 1960 European Cup final to Real Madrid.

"This city deserves it. And now we're going to win this thing."

West Ham missed out on reaching their first major European final since 1976.

"We just played a team that played a similar way to us and it caught us out. We're gutted," said Hammers captain Declan Rice.

Borre scored just after Cresswell was sent off, leaving the visitors a man down for more than an hour and needing to score twice just to force extra time.

Frankfurt had been dealt an early blow when key defender Martin Hinteregger limped off with a leg injury.

When a long ball put Frankfurt's Jens Hauge into space, Cresswell pulled back the Norwegian, who went down just outside the area.

Cresswell, who was also sent off in the quarterfinal first leg against Lyon, was initially only booked, but referee Jesus Gil Manzano brandished the red card after a VAR review.

Moyes, who was angered by that decision, responded by bringing on defender Ben Johnson for Manuel Lanzini.

Yet Frankfurt went ahead in the 26th minute.

When the hosts attacked down the right flank, Ansgar Knauff's cross found Borre, who fired home unmarked in the area.

Dogged defending in the second half restricted Frankfurt to just a handful of chances for Knauff and Filip Kostic, who caused havoc on the left.

West Ham had chances of their own and as the visitors pushed for an equaliser, Manzano banished Moyes to the stands after the Scot lost his temper.

"I kicked a ball back at a ball boy so I apologise for that," said the former Everton and Manchester United boss. "He threw it very softly at me."

Frankfurt, who lost to Chelsea on penalties in the 2019 Europa League semifinals, are into their first European final since winning the Uefa Cup in 1979/80.

"That was an evening you never forget," beamed Frankfurt coach Oliver Glasner. "The squad was exceptional."