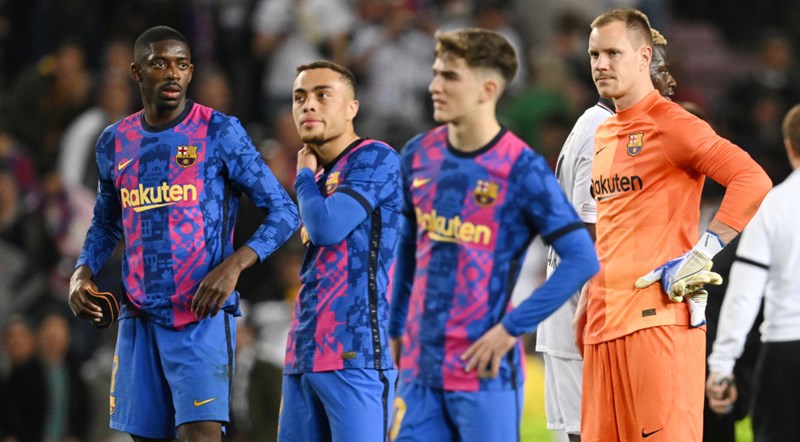 Favourites Barcelona were dumped out of the Europa League at Camp Nou by Eintracht Frankfurt in the quarterfinals on Thursday.

Serbian international Filip Kostic scored twice on either side of a Rafael Santos Borre strike at the Camp Nou for Frankfurt, who survived a late fightback from the hosts to win 3-2 on the night and 4-3 on aggregate.

Sergio Busquets scored a late consolation before Memphis Depay's even later penalty for Barcelona but Eintracht held on, to the delight of the estimated 30,000 German supporters who travelled to Catalonia for the game.

They go through to their second Europa League semifinal in four seasons, having lost on penalties to Chelsea at the same stage in 2019.

However, it was a desperately disappointing defeat for Barcelona, whose recent revival under Xavi Hernandez has been remarkable but who have managed to win just once at home in Europe all season.

Sitting 12 points behind leaders Real Madrid in La Liga, the campaign is now almost certain to end without silverware for the Catalans, although they are at least on course to qualify for next season's Champions League.

After conceding three penalties in their weekend win over Levante, Barca fell behind to another spot-kick inside four minutes against Eintracht, as Kostic converted from 12 yards after a foul by Eric Garcia to the delight of the enormous away support.

The visitors scored again in the 36th minute as Colombian forward Borre fired high into the net from range, and Kostic's low finish into the far corner made it 3-0 midway through the second half.

Busquets had a late goal disallowed for offside before he found the net with a fantastic strike from 20 metres in the first minute of injury time.

The game carried on into an 11th added minute when Depay netted a penalty after Evan Ndicka had been sent off, receiving a second yellow card for a foul on Luuk de Jong.