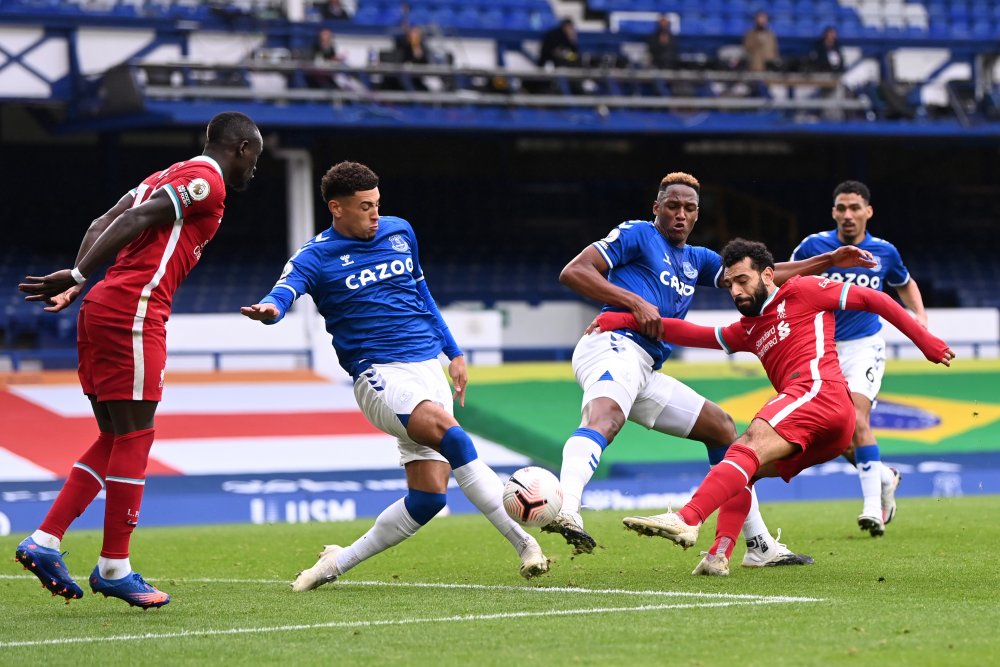 The EPL Meyerside derby was thrilling as Everton held Liverpool in a 2-2 draw as Dominic Calvert-Lewin 81st minute header equalizes with Richarlison given his marching orders with a red card.

The match had a quick start as Robertson loses Coleman on the left and sent in a low ball to Sadio Mane and he finished Pickford off with a powerful shot into the left corner of the net.

Van Virgil Dijk was subbed off with 11 minutes on the clock after a tackle from Pickford left the Dutchman unfit for the match, it could have been a penalty but he was ruled offside by VAR.

With 20 minutes gone, James Rodrguez corner kick was met with Keane's powerful header through Adrian's hands into the net, Parity was restored and the City rivals were back on leveled terms.

The second half was a resumption of hostilities as both sides kept canceling each other out.

Liverpool's second goal came in the 71st minutes after Robertson cross was failed to be properly cleared, and fell into Salah's path, with a first-time volley, he buried it into the Everton's net, Pickford no chance.

That became the Egyptian's 100th strike for Liverpool.

The match seems to end with the Reds taking away all three points not until, Digne receives a pass at the left flank, ran into the Liverpool's area, and dinked in a lovely cross to meet Calvert-Lewin's head. What a strike from Dominic Calvert-Lewin.

His 10th goal of the season, his 7th strike in the English Premier League

? for the season
5️⃣ #PL games in a row@CalvertLewin14. Still on ?! #EVELIVpic.twitter.com/6sYK4xFnJa

He became the first Everton player to score in 5 consecutive EPL games.

Richarlison was given a straight red card 89th minute after a ferocious tackle on Thiago.

The last few minutes was exciting after Thiago found Mane in the box, he dropped it for Jordan Henderson who hit it first-time to beat Pickford into the net. After a VAR review, it was ruled offside as Mane looked to have his body ahead of Yerry Mina and Keane.

Everton tops the table with 13 points and Liverpool moves to 10 points after matchday 5.

1. Everton were more defensive, with Doucoure and Allan holding the midfield, they kept to a reasonable extent the threat from midfield with Liverpool's goals coming from the wing

2. They caught Liverpool with the high line press as they sent more aerial balls than low balls into Liverpool's final third.

3. Liverpool shows that they have what it takes to take on a hard match such as Everton's tough midfielders as they were constantly putting pressure on Everton's defense.

4. Mane keeps proving his importance to Jurgen Klopp and his absences are usually felt especially with the 7-2 at Villa.

5. Everton proves yet again that they are a contender for the EPL 2020-21 season with Carlo Ancelotti and James Rodriguez at the helms.