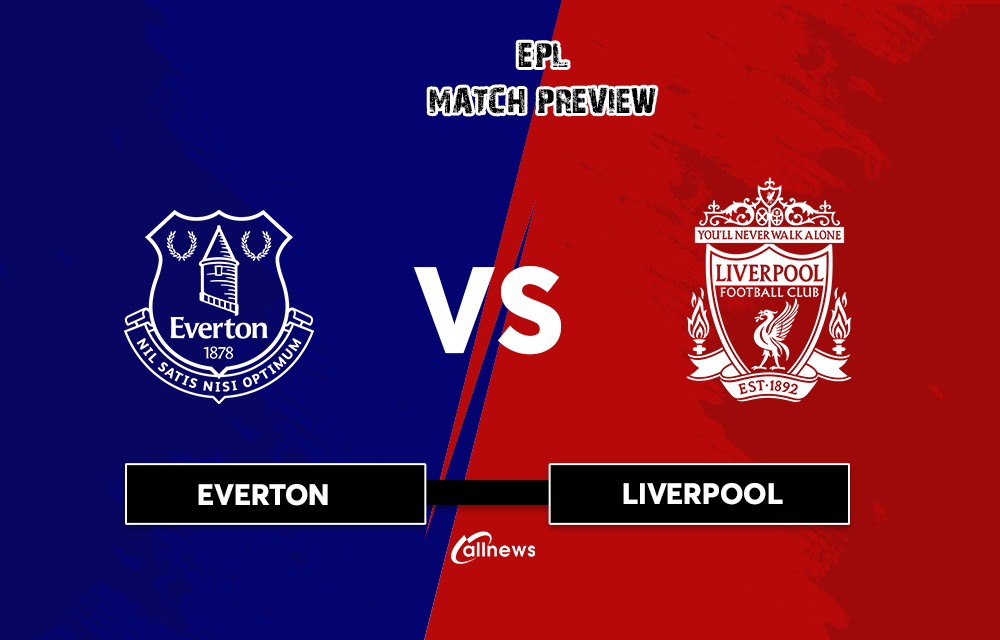 Liverpool suffered one of the most shameful losses in the English Premier League as the defending Champions lost 7-2 to Aston Villa away from home but  Jurgen Klopp will try to bounce back from the loss.

They travel to Goodison Park to face the flawless Everton who presently tops the English Premier League table after a major signing has helped the side get a more flexible game.

James Rodriguez, Dominic Calvert-Lewin, Doucoure, and Allan have been instrumental to the side winning streak and they face their major test to see if they really have what it takes to contend for the title or at least finish as part of the top 5 in the EPL.

Carlo Ancelotti will face Jurgen Klopp in the first Merseyside Derby of the EPL 2020-21 season.

Everton has been a better side scoring 12 goals, conceding 5 goals in the last 4 games played.

Dominic Calvert-Lewin's present form will pose a huge problem for Liverpool as the defensive line of the Reds has been porous lately.

After his international debut cushioned also with a debut goal, his morale is high and would be a huge difference in the game against Liverpool.

He became the first Everton striker to score at Wembley after Gary Lineker since 1985.

The Toffees are practically the best team of September as the club's coach and striker clinched the premier League award of the month.

Other players at the Goodison Park also had a wonderful international break; James and Yerry Mina for Colombia, Pickford for England, Richarlison for Brazil.

This is a great achievement for this month. I have to share this recognition with my team because they started the season well.

We want to continue and win this award again.

Thanks to all. #PL pic.twitter.com/kM9MGKUDJc

While the club striker, Dominic Calvert-Lewin won the Premier League player of the month for September

Not a bad couple of days ?

After the transfer deadline, Everton was able to pull a deal over the line by signing a defender, Ben Godfrey from Norwich.

He will be very ready to take on Liverpool.

Liverpool will be out for revenge like "a wounded animal" as said by former Liverpool midfielder, Murphy.

The 7-2 loss is very huge that Liverpool had to pull a deal for Marcelo, a Brazilian young goalkeeper to provide more depth than Adrian between the sticks.

Apart from the COVID-19 crisis which kept Sadio Mane, Thiago Alcantara, and now Naby Keita out of the squad.

They should be back by Saturday before the match as the 14-days isolation period may be over for Mane and Thiago but Keita might not make it for the match but be back for the UEFA Champions League match against Ajax.

Back in @premierleague action ?

Jurgen Klopp might stick with his favourite backline of Virgil Dijk, Alexandre Arnold, Matip or Gomez, and Andy Robertson but Alisson Becker is still out on injury and Adrian might still be picked to be between the sticks.

With Keita out, Thiago, Fabinho, Gini Wijlnaldum, and Jordan Henderson could be in the midfield position and the front line could be Mane, Salah, and Firmino which the Toffees will be expecting also.

Firmino scored twice to help @CBF_Futebol open their #WCQ with a 5-0 victory over Bolivia ???

The last meeting between Everton and Liverpool at the Goodison park ended 0-0 in the EPL round 30th fixture in a raining derby though there was not much to fight for as they were already inches from the EPL title.

Before that meeting Liverpool has won the last two fixtures at Anfield -  from the last 5 meetings in all competition, Liverpool won all home games and drew all away games.

Apart from the form and morale of the Everton, Liverpool has always found it hard to defeat Everton at home and it will even be more difficult now with the present state of the team and the low morale of the Anfield outfit.

Liverpool is considering the new duo in the midfield - Thiago and Wijnaldum as both are capable of tackles and goals, especially Thiago's ability to move forward and still drop back to provide cover.

.@GWijnaldum considers the Reds and @Thiago6 a ‘perfect match’ ??

It is more than comfortable for the Reds to go to the match knowing they still have the German genius in their corner.

In the #FiveYearsOfKlopp at the Reds so far, what has been:

US: New customers can use the free trial offer on FuboTV* to stream broadcast of Everton vs Liverpool by following the simple steps below.