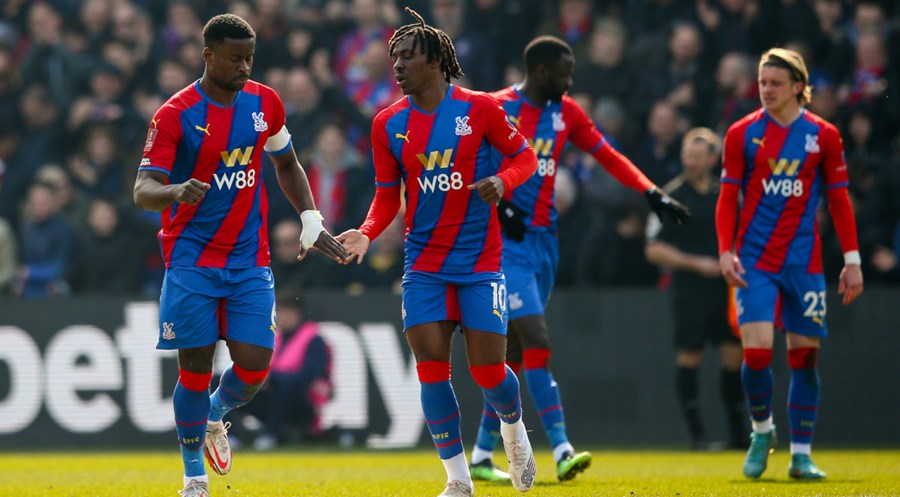 Crystal Palace made a statement win in the FA Cup to qualify for the semifinals, the first time in six years with a 4-0 thrashing of struggling Everton on Sunday.

Marc Guehi, Jean-Philippe Mateta, Wilfried Zaha and Will Hughes got the goals as the Eagles continued their impressive first season under Patrick Vieira.

Everton's focus now turns to just staying in the Premier League as they sit perilously just above the relegation zone.

Frank Lampard's men managed just a second league win in 12 games against Newcastle on Thursday and started like they could build on that confidence boost.

However, there was no way back once their frailty from set-pieces was exposed for the opening goal.

Guehi was called into the England squad for the first time this week and celebrated with his fourth goal since joining from Chelsea as he headed in Michael Olise's corner.

The combination of Olise, Zaha and Eberechi Eze then began to cut Everton apart, no more so than in a flowing move for the second goal.

Eze's quick feet freed Zaha down the left and his low cross was swept in by Mateta.

Everton laboured as they tried to get back in the tie with Demarai Gray's long-range effort that flew wide the closest the came to a response.

But two more goals in the final 11 minutes set the seal on a resounding Palace win.

Zaha was alert after Olise's shot looped up onto the crossbar to slot home his 10th goal of the season.

And Hughes rounded off the scoring with his first goal since 2019 on the rebound after Jordan Pickford produced a stunning save to deny Connor Gallagher.

Palace join Chelsea in the draw for the last four with Southampton hosting Manchester City and Liverpool travelling to Nottingham Forest in Sunday's two other quarterfinal ties.