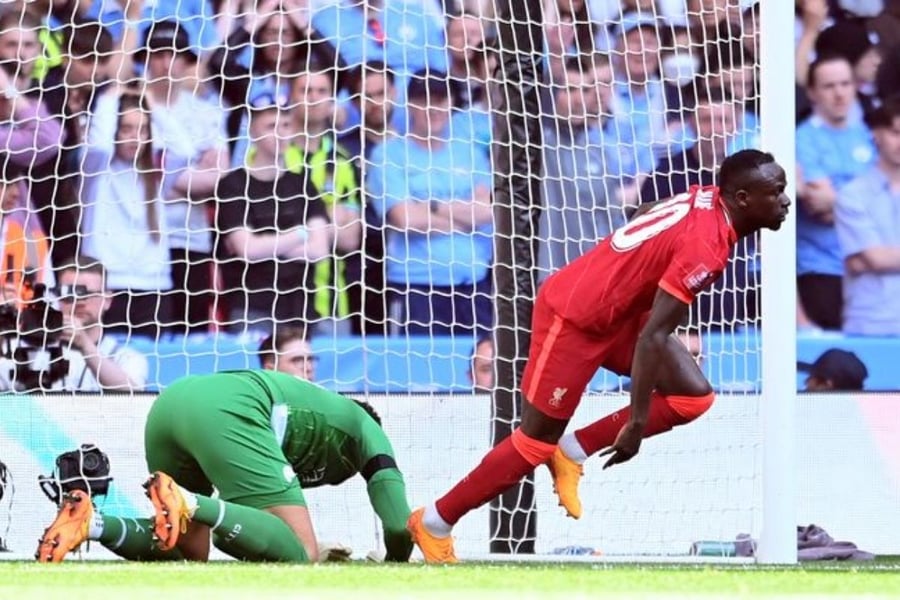 Senegalese forward Sadio Mane's double edged Liverpool past Manchester City in a dying minute thriller that kept the Reds alive in their quadruple bid and shattered their rivals' treble hopes.

Jurgen Klopp's side are chasing an unprecedented clean-sweep of the four major trophies in a single season.

They remain on course to achieve that incredible target after a scintillating first-half display in Saturday's semifinal at Wembley.

Ibrahima Konte put Liverpool ahead and Mane doubled their lead thanks to a blunder from City keeper Zack Steffen.

Senegal forward Mane struck again before halftime and, although Jack Grealish and Bernardo Silva netted after the interval, City were unable to complete a remarkable revival.

Liverpool will make their first FA Cup final appearance since 2012 on 14 May when they face Chelsea or Crystal Palace, who meet in Sunday's semifinal.

The Reds, into the FA Cup final for the 15th time, haven't won the competition since 2006, while Klopp has yet to lead them to a domestic knockout trophy.

Trailing Premier League leaders City by just one point with seven games left, Liverpool have already won the League Cup and have also reached the Champions League semifinals, where they will play Villarreal.

Despite Klopp's protestations that the quadruple is an impossible dream, this was another step towards football immortality.

For City, fatigued physically and mentally, it was a game too far as Liverpool handed them the first defeat in 11 games.

Both league meetings this season had ended in 2-2 draws, including a pulsating clash at the Etihad Stadium last weekend.

But, battered and bruised after surviving a gruelling Champions League quarterfinal at Atletico Madrid on Wednesday, City were unable to match Liverpool's intensity as they surrendered possession with uncharacteristic mistakes.

Pep Guardiola claimed City were "exhausted", giving him "no choice" but to make changes, with Kevin De Bruyne on the bench alongside Ederson, Ruben Dias and Rodri, while Kyle Walker was sidelined with an injury.

Guardiola will believe his selection was the right move if City can pip Liverpool in the title race and reach a second successive Champions League final.