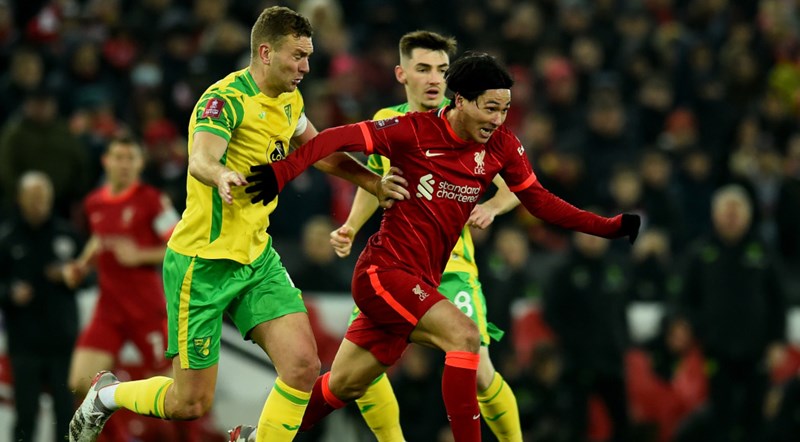 Liverpool booked their spot in the FA Cup quarterfinals off the back of Japanese forward Takumi Minamino's double which secured a 2-1 win over Norwich City at Anfield on Wednesday.

Three days after they won the League Cup to clinch the first major trophy of the season, Liverpool dominated Premier League strugglers Norwich in the early stages.

Minamino's first goal ended a fine Liverpool move, with Divock Origi, given a rare start by manager Jurgen Klopp, setting up his teammate in the 29th minute.

A powerful finish from Minamino eight minutes later put Liverpool in command and Alex Oxlade-Chamberlain almost added a third midway through the second half.

However, Norwich refused to give in and Lukas Rupp gave them hope with an arrowing strike 14 minutes from time.

That ensured a nervy finish at Anfield, with home goalkeeper Alisson forced to deny Norwich substitute Jonathan Rowe, but the hosts held on to stay in the hunt for three more trophies this season.

"We have never been in an FA Cup quarterfinal (under the German)," Klopp told ITV. "We made 10 changes to the team and we were always going to find it tough against a good team, but we played really good football and scored some really good goals.

"Takumi is an incredible player and tonight was the best game he had for us. He was a constant threat throughout."

Southampton joined Liverpool in the quarterfinals as they continued their fine form with a 3-1 win over West Ham United.

The home side took the lead in the first half through French full-back Romain Perraud, who hammered a stunning strike into the net from distance before West Ham levelled through Michail Antonio.

James Ward-Prowse's penalty put Southampton back in front in the 69th minute and Armando Broja added a stoppage-time third to ensure his team have now lost only one of their last 13 games in all competitions.