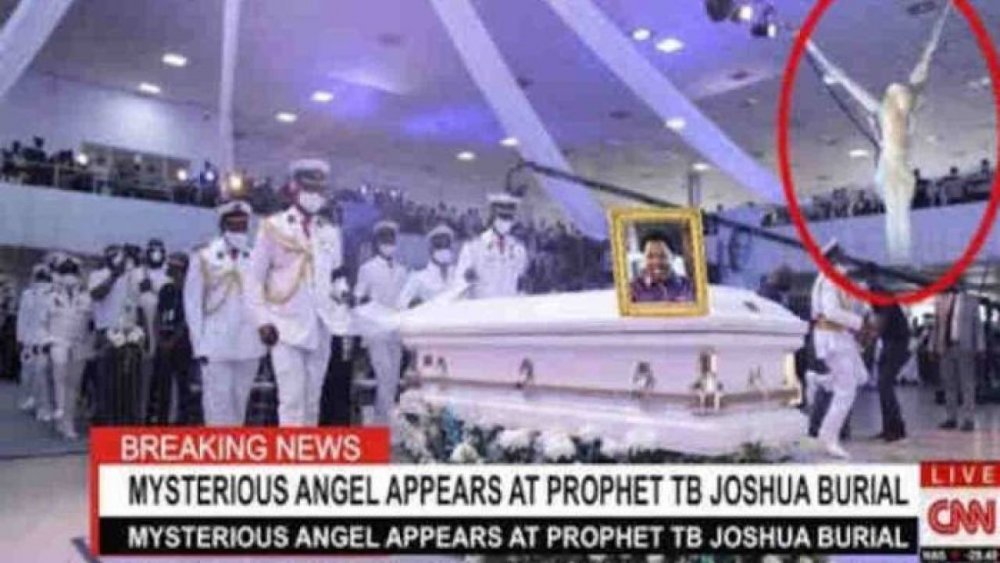 A photo shared hundreds of times on Facebook claims to show the American cable news channel CNN broadcasting 'the mysterious angel appearance' at the supposed funeral of Pastor Temitope Balogun Joshua, popularly known as T. B. Joshua. It was claimed that Joshua has been secretly buried, and the angel sighted was "dangling from the roof". This is false: The image has been doctored and the headline added to it is incorrect.

One Facebook post featuring the image, and accompanied with a voiceover has been shared more than 7, 000 times.

Claim about late Joshua's burial service published on this YouTube channel has garnered over 130, 000 views

The same image has been shared in a Twitter update here, on the verified handle of the Camspartial Intelligence Services (CIS) Limited, a company that claims to do Private Intelligence and Investigations. Many blogs have also published the 'news' of Pastor TB Joshua's alleged secret burial. 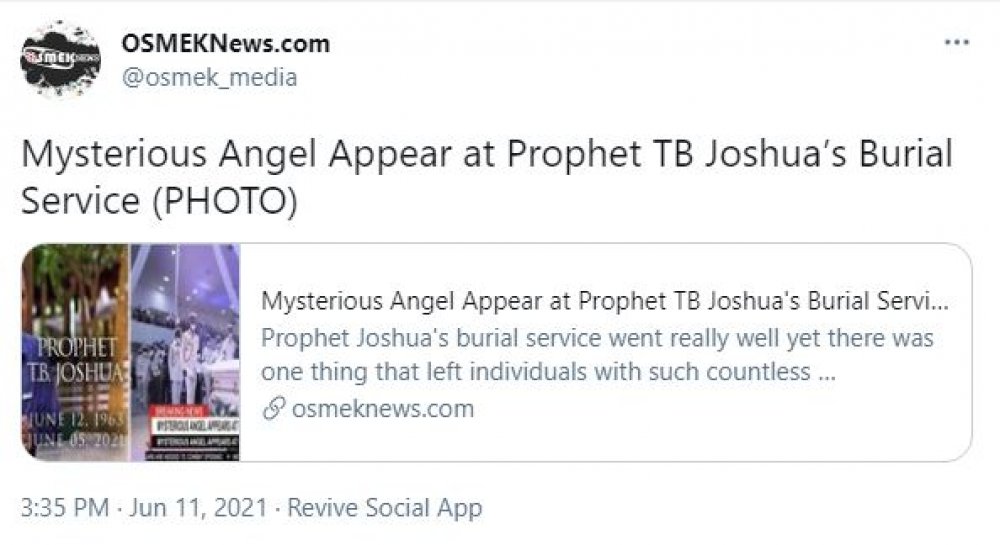 The misleading image which started circulating online on June 10, was doctored by using a screenshot from an original CNN transmission and replacing the original headlines, in this case with false claims about TB Joshua.

One example was the story that a United Kingdom (UK) Media Expert said Biafra Radio is the most educative in Africa, which AllNews debunked here.

As of the time of publishing this report, Pastor TB Joshua has not been buried.

Pastor TB Joshua, the founder of the Synagogue Church of All Nations (SCOAN), Lagos, Nigeria, is famous all around the world. 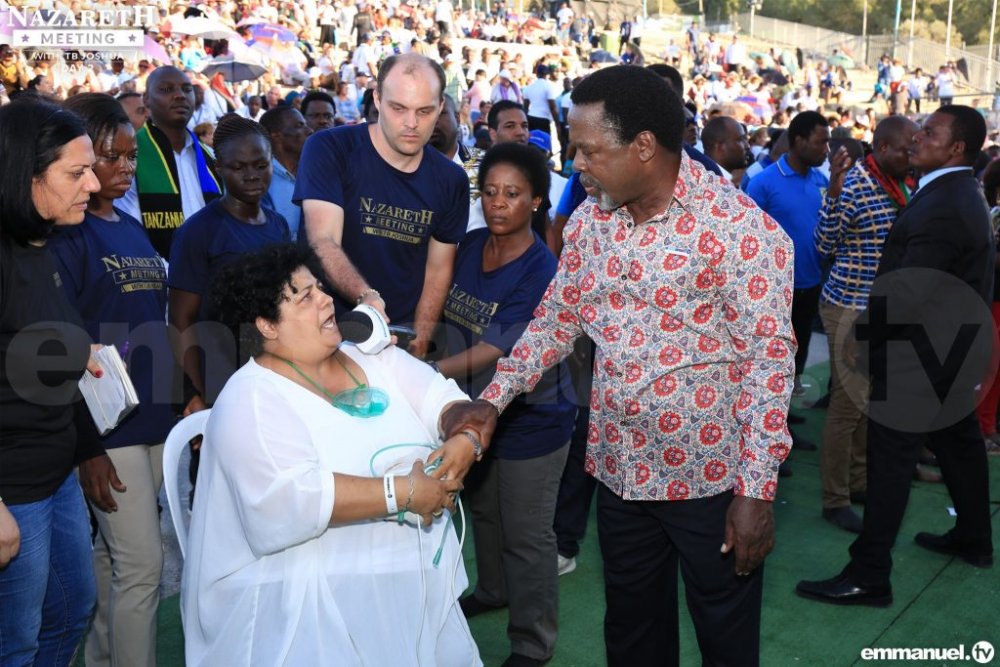 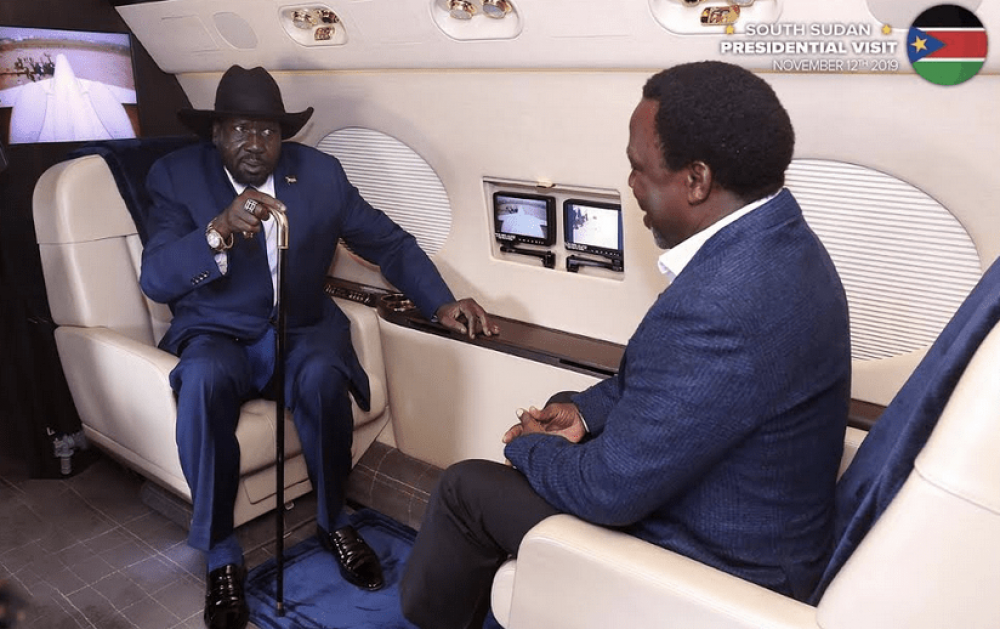 Eight days after his demise, his family is still planning his burial, AllNews can authoritatively report.

AllNews understands that Joshua's kins are taking his funeral rites with seriousness.

It would be recalled that the monarchs in the four local government areas in Akokoland of Ondo State, Joshua's state of origin, restated their call that the remains of the late televangelist be buried in his hometown, Arigidi Akoko.

The family of the deceased were in Lagos last week with respect to the burial arrangement of the late cleric.

The monarchs and the community leaders in the four local governments held a meeting, specifically last Thursday, 10th of June, (the same day rumours of Joshua's secret burial and an angel appearing at his burial service started gaining momentum) in Oka Akoko, the headquarters of Akoko South West Local Government Area, where they resolved that the interment of the late preacher should be held in his hometown.

In the communique issued at the end of the meeting, the traditional rulers said Joshua had done well for the people of the Akokoland and deserved to be buried in Arigidi Akoko.

The communique was signed by the monarchs of Oka Akoko and that of Ikaramu Akoko, Oba Yusuf Adeleye, and Oba Andrew Momodu, respectively.

The monarchs said there was the need for late Joshua to be immortalised “in order to make the whole world know that Akoko people were appreciative of his (Joshua) robust contribution to the growth and development of the Akokoland.”

In fact, in an interview with BBC News Yoruba, published on June 8, Oba Yisa Olanipekun, the Zaki of Arigidi-Akoko, who is the traditional ruler of Joshua's hometown, stressed that the deceased must not be buried in Lagos.

AllNews' verdict about the claim

The claim that a mysterious angel appeared at TB Joshua's 'secret burial' in Lagos is cooked up. CNN never aired such news, and TB Joshua has not been buried - neither in Ondo nor Lagos State.