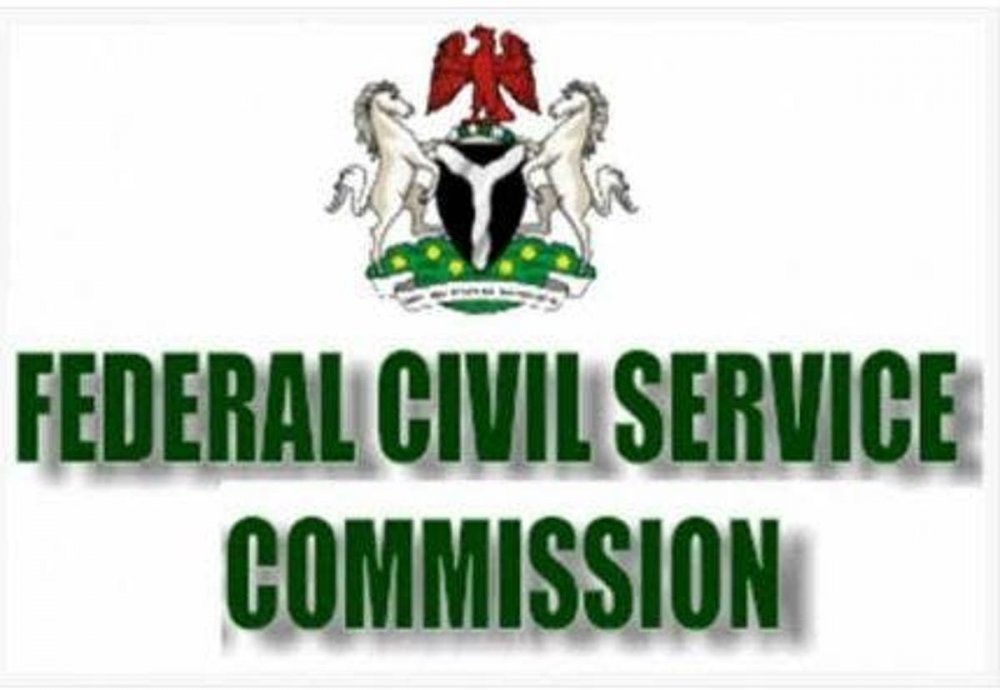 It states that the hiring is endorsed by Folashade Yemi-Esan, the current head of the civil service of Nigeria. See the full message below:

https://bit.ly/apply-civil-servant-2021
Note: For the avoidance of doubt, the completion/submission of applications is FREE and at no cost to applicants.
Signed by:
FOLASHADE MAJEBI
Head of Nigeria Civil Servant 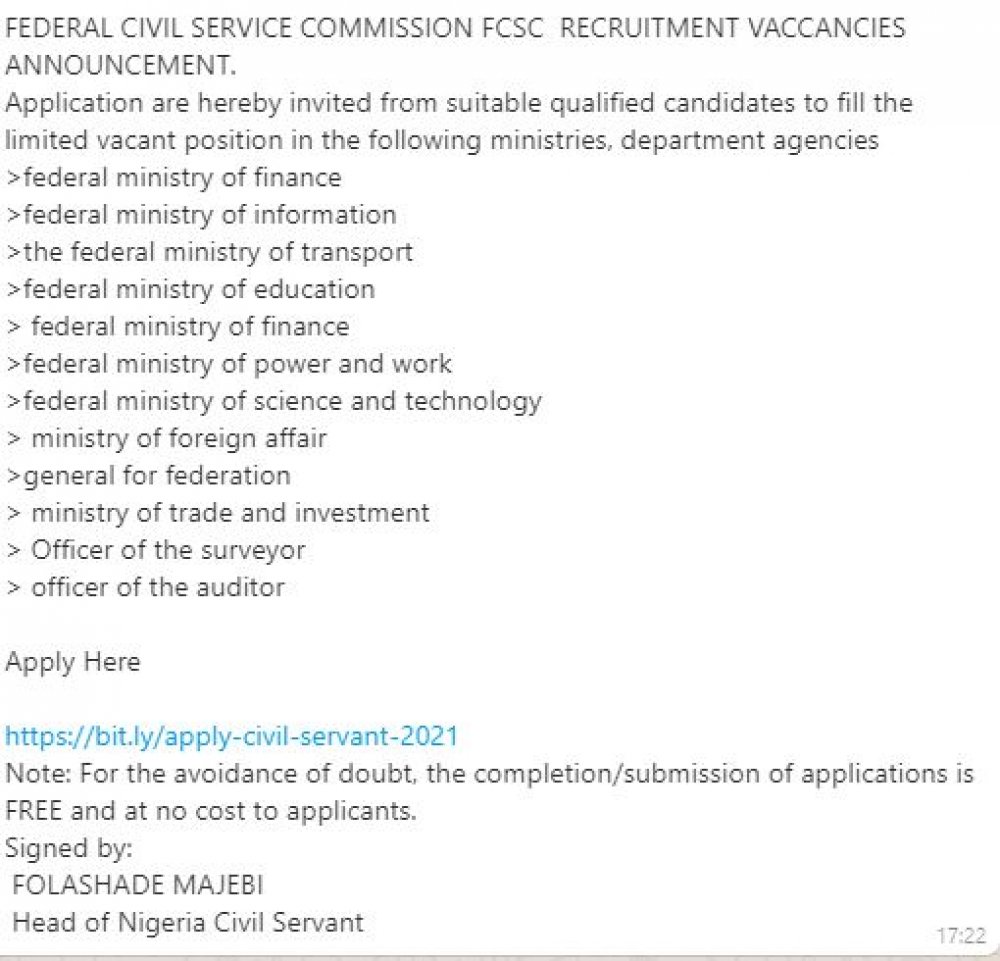 A screengrab of the purported recruitment message

The message about the FCSC recruitment follows the same pattern of fraud pointed out by AllNews in the past. See an example here: Beware, Viral WhatsApp Message On Free Money, Gratuitous Foreign Trip For CAC Registration Is Scam. 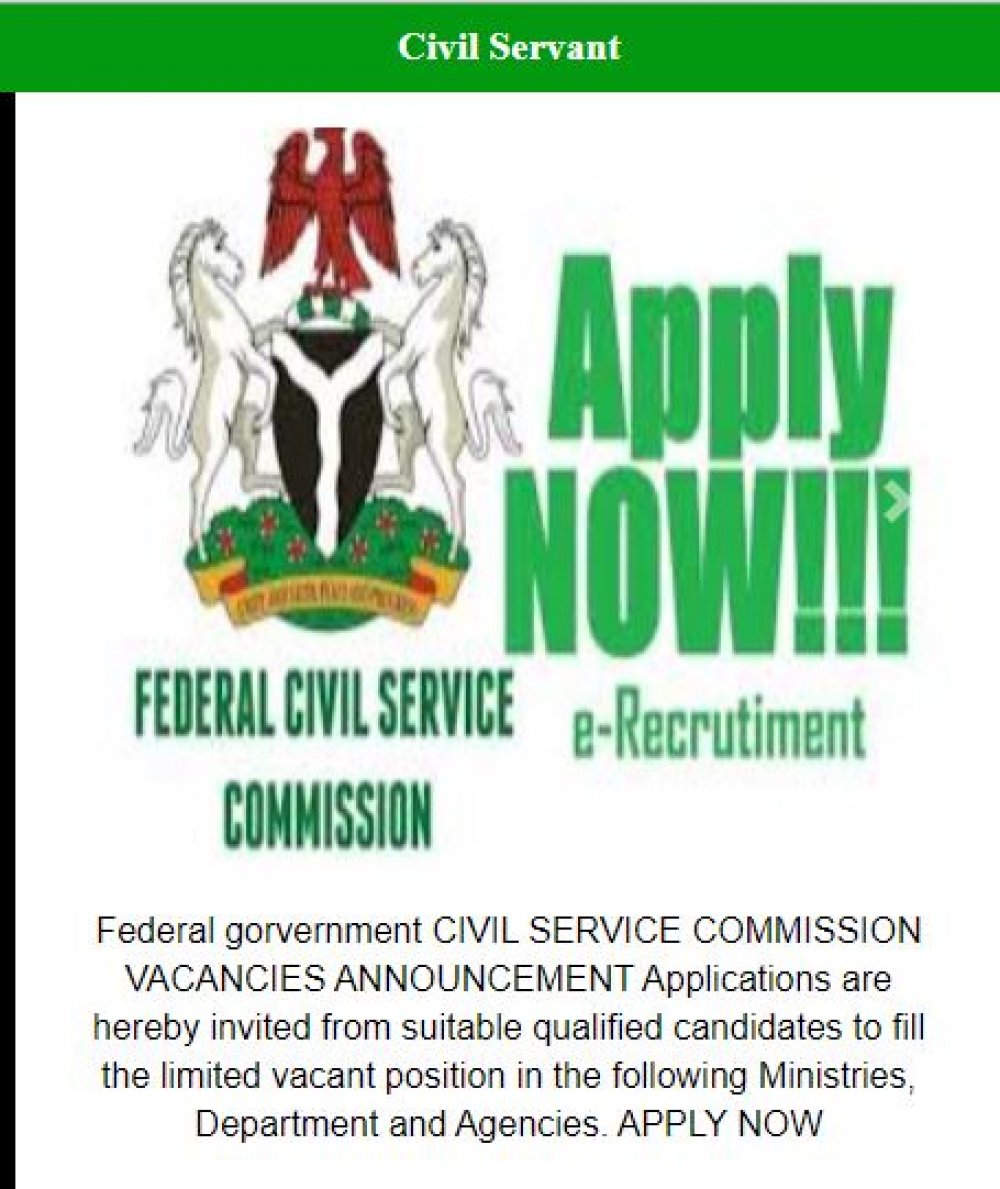 The spelling is poor: “Vaccancies” for vacancies, “gorvernemnt” for government, "Marrital" for marital, etc. Irregular capitalisation of certain letters was noticed too. Howlers like this are a sign that a website is bogus.

There is no record of such vacancy on relevant Nigerian government websites. AllNews went through the Federal Civil Service Commission website and found nothing.

Then, once a user has entered their information and gone through several further steps, they are only able to "benefit" from the opportunity if they share the site with 15 contacts or five groups on WhatsApp. Check below how the message appeared:

Congratulations You have been selected to benefit from the civil servant Re-cruitment from the Federal gorvernemnt. Answer the following questions to get credited immediately!

1. What is your Qualification Status?
2. What Is Your Marrital Status?
3. Choose Your Age Range?

AllNews recalls that in a report published by Sahara Reporters in March, the Federal Government warned Nigerians about fake appointment vacancies and letters.

President Muhammadu Buhari had suspended recruitment into the federal civil service since May 2020, citing the COVID-19 pandemic.

Buhari, via a memo through the Office of the Head of the Service of the Federation, approved the suspension of the recruitment.

The FCSC, the body responsible for the recruitment, promotion and other issues relating to the civil service, also confirmed the development saying the Office of the Head of Civil Service of the Federation (OHSF) in a letter dated May 15, 2020, gave the directive and the embargo had not yet been lifted - as of this time.

The FCSC in the memo stated that the agency did not recruit and would not recruit until a waiver was granted.

The memo was signed by Babaoye Eniola, Director of Press and Public Relations Unit had stated, “On the issue of fake letters of appointment, the commission has spread out her tentacles to combat it maximally. Some of the steps taken include: the display of flex-banners in every nook and cranny of the commission's complex.

“On recruitment, the Office of the Head of Service of the Federation forwarded a letter, dated May 15, 2020, of the general suspension of recruitments into the Public Service by Mr. President as a result of the effects of COVID-19 on the Federal Government’s revenue projections.

“Thus, the FCSC did not and will not recruit until waiver is granted by the Office of the Head of Civil Service of the Federation.”

Nigeria, like most nations in the world, is still faced with COVID-19 challenges, and no waiver has been granted by the OHSF yet.

AllNews contacted the FCSC via the website but got an error message more than once. Efforts by this reporter to reach Dr. Mrs. Yemi-Esan were unsuccessful.

The information circulating on WhatsApp that the FCSC is now recruiting, via a certain link, is false. The website is found to be fraudulent.