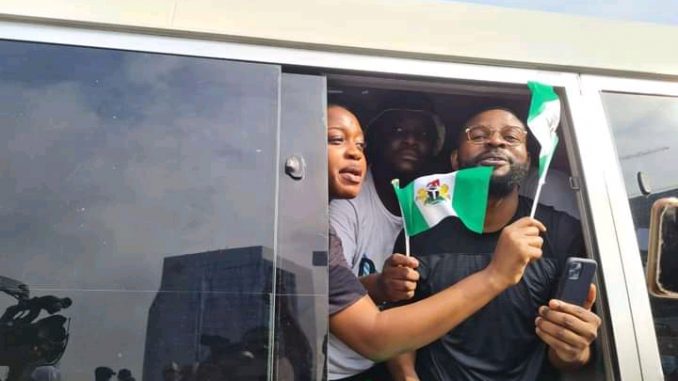 Falz, others at #EndSARS Anniversary protest

AllNews Nigeria reports that the celebrities alongside other activists joined in the EndSARS Memorial protest on Wednesday in the car procession following the heavy presence of armed police personnel at the venue.

The celebrities and other activities who turned up at the tollgate with their cars were seen waving Nigerian flags from inside the vehicles and singing solidarity songs.

Some of the activists who spoke to newsmen stated that they would continue going to and from the tollgate as their own way of protesting the alleged killing of citizens at the tollgate on October 20, 2020.

The protesters were also honking their horns while singing solidarity songs.

Speaking to newsmen, Mr. Macaroni who was in a Lexus SUV said Nigeria must listen to the demands of the youths and embrace good governance while Falz stated that Nigerians must learn to stand up for their rights.

The EndSARS protest is said to be a decentralized social movement and series of mass protests against police brutality and bad governance in Nigeria.

The youths have maintained their energy to remember those murdered in last year's demonstration as they pay tributes those who lost their lives while asking for change and the end of police brutality in Nigeria.