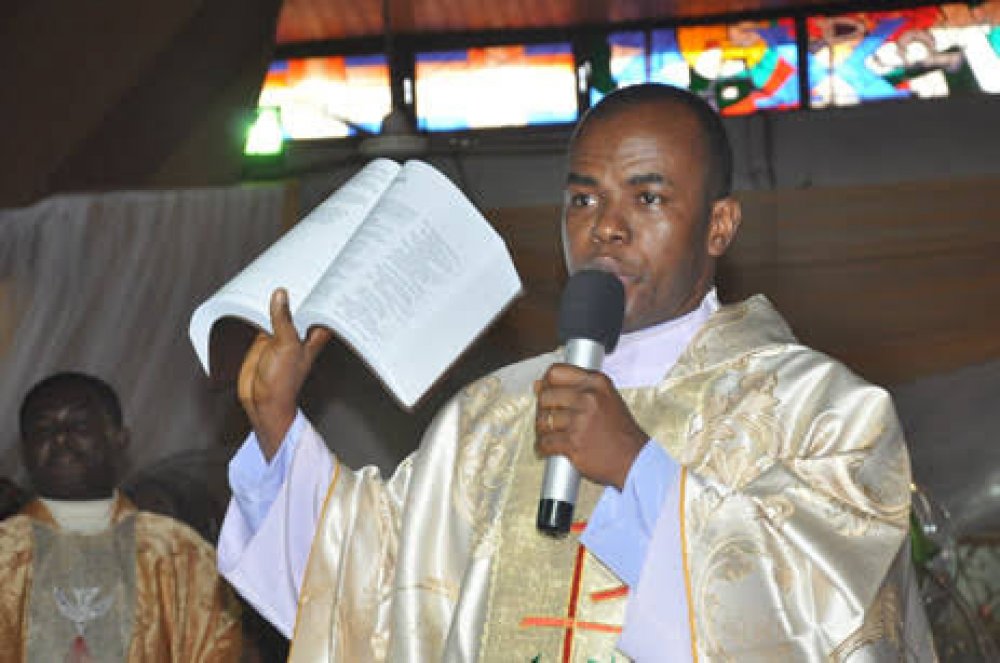 AllNews reports that the clergyman in the prophecies he released further warned the present administration that failure to "take care of the youths" will spell doom for the All Progressives Congress (APC)-led government.

Mbaka spoke at the 2020 edition of his popular annual December 31 Crossover Night ministration, advising the Nigerian government to take swift moves to create jobs to prevent Nigerian youths from embarking on uneasiness that may consume the administration.

The event, which held at the AMEN Arena, Enugu, was tagged, “Cornucopia of New Miracles from God”.

The fiery priest also took a swipe at the country’s lawmakers, especially members of the National Assembly (NASS).

Describing the lawmakers as “kidnappers”, he maintained that unless the Buhari administration hastened move to genuinely start taking care of the youths, they (youths) “will rise and end the current political system”.

While noting that Nigerians were going through horrible conditions, Mbaka also cautioned state governors, ministers and all political office holders, stressing that they have alone the choice of repenting and start “doing the needful” otherwise, what awaited them would be unbearable.

Father Mbaka said: “The Holy Spirit of God asked me to warn the government of the day to be very careful; to change policies and take care of the youths without politicising their (youths’) condition.

“That the government should rise and urgently create jobs and innovate opportunities that would benefit the youths of the nation because they have suffered so much.

“Don’t politicise the condition of the youths, otherwise, they will arise and end the political system.

Mbaka, who did not specify when the latent youth agitation would occur, however, unleashed another 'baffling' pronouncement.

He stated: “I can see a year ahead; it is not specific whether it is in 2021 that this will happen, but it is within a time in the time of life, that the anger of God will befall many people in the political circle because they have looted so much and disgraced this nation enough.

“Those who should be serving the country have looted the country dry for their personal aggrandisement, such that our children and grandchildren no longer have a future”.

He pointed out that politicians had for long busied themselves in “packing and packing the nation’s commonwealth, refusing to create wealth, but that they now turned around to tag the youths kidnappers, criminals, hoodlums and so on.

Furthermore, Father Mbaka declared that God was angry with past and present leaders for turning Nigerian youths into beggars in other countries due to overwhelming hardship in the nation, and urged them to find a way to correct their misdoings.

“They should obey the voice of God, sit together and think out how to reshape Nigeria.

“The situation in the country portends wickedness, wicked ruling in high places, in the name of legislators; they are the real kidnappers, and the anger of God is upon them.

“I know they would want to attack this message, as usual, but I warn, let nobody, whether you are a politician or a man of God, attacks this message so you do not become a victim!

“Whoever that would conspire against this message or partake in any gang-up against me or this ministry, your evil plans will turn back and befall you.

“They have kidnapped a lot of infrastructure development,” he added.