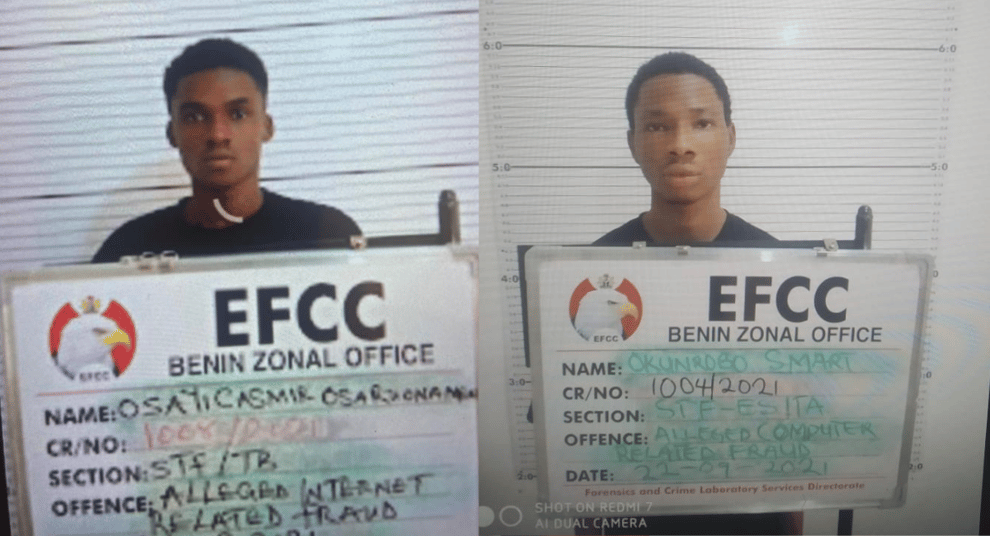 The Economic and Financial Crimes Commission (EFCC) on Monday, January 17, 2022, arraigned the fraudsters identified as Okunrobo Smart and Osayi Casmir Osaruonameh before the court on a one-count charge of impersonation and obtaining by false pretence.

The duo was said to have misrepresented their identities to defraud unsuspecting foreign nationals.

The charge against Osaruonamen reads, “That you Osayi Casmir Osaruonamen sometime between January and 12th of September, 2021 at Benin City, Edo State within the jurisdiction of this Honourable Court with intent to defraud, sent an electronic message which materially misrepresented your identity to Thejasminecarter, a lady in the United States of America upon which she relied and suffered financial loss in the sum of $15,047 and thereby committed an offence contrary to and punishable under Section 14(2) of the Cybercrime (Prohibition, Prevention, etc.) Act, 2015”.

Upon arraignment, the defendants pleaded guilty to the charge.

In view of their pleas, the prosecution counsel, I. K. Agwai prayed the court to convict and sentence the defendants accordingly.

However, the defence counsel, Matthew Adebola urged the court to temper justice with mercy as the defendants were first-time offenders who have become remorseful for their actions.

Justice Olubanjo convicted and sentenced the defendants to five years imprisonment with the option of a fine of N1 million each.

In addition, the defendants are to forfeit the balance in their various bank accounts as well as their phones and an apple wristwatch to the Federal Government of Nigeria.

They are also to undertake in writing to be of good behaviour henceforth.