Femi Adesina And His Campaign Of Calumny Against Primate Elijah Ayodele, By Olakunle Adejobi 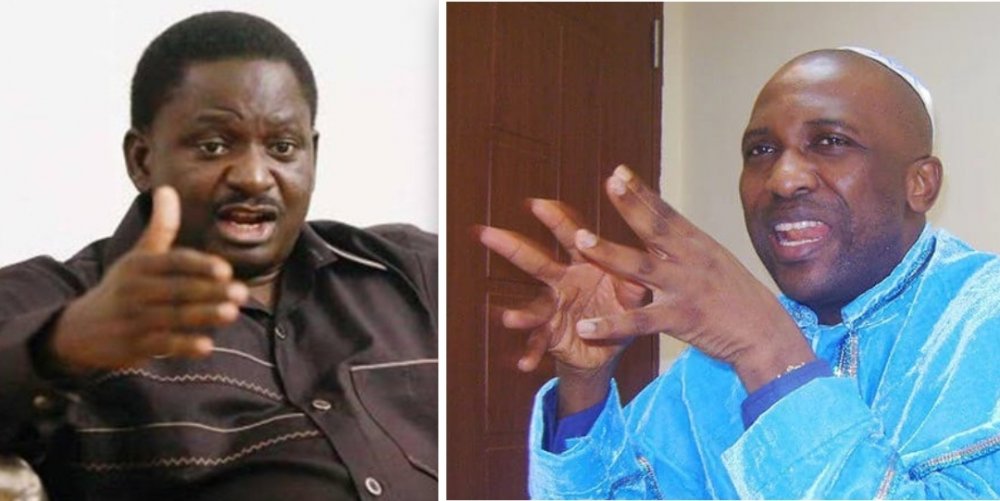 I was surfing the internet on Thursday night after a stressful day at work and because the federal government has banned twitter, I had to enjoy my facebook app which I have made an alternative whenever I want to read or watch funny and educative posts.

I follow several pages on facebook, most especially those ones operated by political leaders and appointees, this is due to my love for politics and my never quenched thirst for information that comes from the seat of power.

One of the pages I have followed consistently over the years is that of Femi Adesina, the President’s special adviser on media and publicity. This is because I see him as an intelligent, factual, and interesting person who serves as a leader to every journalists in Nigeria, I mean, He has reached the peak of his career and people really look up to him. Although in recent times, some have called him names for his view on some issues but I have never for once joined bandwagon because I feel they are not being sincere in their criticisms. However, Thursday night actually confirmed what people have always said, I couldn’t believe my eyes as journalism suddenly went down the drain in the hands of its custodian, Mr Femi Adesina, arguably the most envied journalist in Nigeria at the moment.

Mr Femi Adesina as usual made a long paragraphed post titled ‘Some Prophets See Nothing’ talking about Prophets in Africa. He started by mentioning a man who prophesied the victory of England at the just concluded Euro 2020 cup before moving to the main target of his post, Primate Elijah Ayodele of INRI Evangelical Spiritual Church.

Primate Ayodele is a very popular man of God who has made several warnings to power, he is known for his courage and boldness in speaking the truth to power, I quickly focused on the post to see what the highly respected writer has written this time around. Shockingly, Femi Adesina went on by stating some prophecies of Primate Ayodele that didn’t come to pass according to him, continued by saying Primate Ayodele is a very good humanitarian and ended with advising him to focus on his philanthropic activities and leave the prophetic ministry.

If Femi Adesina was factual with the prophecies he listed as not coming to pass, there wouldn’t have been need to pay attention but for the sake of excellent journalism, the need to call him to order is highly important.

‘’ Let’s look at all these facts: in the build up to 2015 presidential elections, Primate Ayodele said Goodluck Jonathan would win. The man lost. He said the People’s Democratic Party (PDP) would take Kaduna by a narrow margin. Nasir el-Rufai of the All Progressives Congress (APC) won. Again, he said Yobe, Gombe, Benue, Delta, and Akwa Ibom States would be won by PDP. The APC won three of those States. Who hit the crossbar? You know the answer.

PDP will shock APC in Lagos. It didn’t happen. Boko Haram would bomb South West. Mercifully, it didn’t happen. APC would break, Buhari won’t do second term. You know the truth. And in 2017, when the President was on medical vacation abroad for many months, he said the seat was vacant, and the man would never return. You now know who didn’t speak the truth, who didn’t hear from God’’

On PDP Shocking Lagos in 2015, it seems Femi Adesina was too busy with campaigning to secure an appointment when PDP nearly took Lagos from APC if not for the intervention of some leaders of the party in a crooked way. PDP won seats in the house of assembly which was unusual and till date, every political analyst still maintain that PDP was robbed off that election, was that not shocking enough that PDP shook APC’s stronghold?

On the Kaduna Election that Nasir El Rufai won, Primate Ayodele never said PDP would win, He categorically said it will be difficult for PDP to retain the state, and for the other states Femi Adesina mentioned, it would be best for him to make his findings and provide video proof of Primate Ayodele making these statements because as far as I know, the man of God never said this and as a journalist that Femi Adesina is, wouldn’t it have been proper for him to call Primate Ayodele then to confirm if he said all of these? The official statement from the man of God media office is stating a different thing with the record on prestigious media publications. Funny enough, Femi Adesina used to have a personal relationship with Primate Ayodele, he was even at his church to preach at a time, how come he never resorted to hearing directly from the man of God on these prophecies, or is this one of his pull him down syndrome tactic against Primate Elijah Ayodele as ordered by his paymasters?

On Buhari’s seat becoming vacant, Primate Ayodele never meant death for President Buhari, infact Primate Ayodele ordered Nigeria to pray for President Buhari’s health when he was away. This was even published on a popular website (https://thewhistler.ng/i-see-nigerian-flag-flown-half-mast-cabal-dethroning-osinbajo-primate-ayodele/)
so we wonder where Femi Adesina got his version from.
Talking about the All progressive congress breaking, if truly Femi Adesina is informed, even the blind man knows APC has broken into pieces, it has not just being admitted publicly. We see the national leader of the party kicking against policies made by the acting national chairman, we saw how this played out during the party’s registration, another crisis is also rocking the party’s national congress which has been shifted twice, how then can we describe this as togetherness?

On Boko Haram bombing South west, that prophecy was just made this year as a warning to awaken the security system of the south west in general, if a man of God has made some revelations or warnings, the fact that it is yet to come to pass doesn’t mean it won’t and why should Femi Adesina expect bombings in South west. Who should go and start praying to God to avert if it not him? It’s unfortunate that everything Femi Adesina mentioned on this post of his are nothing but false. It’s sad that one of the longest serving journalists in Nigeria has given himself out to hearsays and unconfirmed reports to attack a man of God who does nothing but reveal God’s mind and warnings to nations beyond Nigeria and Africa.

The main reason for his post was to talk about the recent prophecy of Primate Ayodele that talked about Nigeria breaking before 2040. Femi Adesina beastly described the prophecy as one that wasn’t heard from God and assured that Nigeria will survive beyond 2040, the question is, How can a man who doesn’t see beyond his nose, a mere man who operates in the physical realm be sure of what will happen in the next minute not to talk of many years to come? A prophet sees things long before they happen, Femi Adesina should not read prophecy like novels or articles. These are very important warnings and instead of praying to God, he is out there attacking Primate Ayodele for speaking God’s mind, may God forgive him.

He also frowned at Primate Ayodele’s negative prophecies, explaining that prophecies are supposed to edify the soul. Maybe we should ask him if he didn’t hear about Prophet Jeremiah’s prophecy to Judah in the bible or Prophet Elijah’s many prophecies that were not palatable. A prophet says what he sees, not for anyone’s edification but for the name of God to be glorified.

Of course, I know for sure that Femi Adesina would never have soiled his reputable journalism career for this cheap campaign of calumny against Primate Ayodele whose tentacles have spread far and wide by God’s grace, he has only sacrificed himself as a tool to shut down every one speaking truth to the power but unfortunately, even if the whole media team, joined by all appointees of the Presidency come together as a force against Primate Ayodele, they will flee in seven ways because no one dares touch God’s project ‘’Touch Not My Anointed And Do My Prophets No Harm’’.

For the record, Primate Elijah Ayodele is the only prophet in Africa to consistently produce an annual book of prophecy titled Warnings To The Nation since 1994. The 27th edition was launched on Saturday, 10th Of July, 2021. He is also the only prophet to have over 10,000 fulfilled prophecies with a compendium published for record purposes. Primate Ayodele isn’t someone that will be easily pulled down by this unprofessional article by Femi Adesina, it can’t even touch the hair on his body but there’s really a need to call Femi Adesina to order before he loses track.

Let’s even talk about the recent fulfilled prophecies of this man of God. Primate Ayodele had warned that He foresees assassination of an African leader, this came to pass in Haiti recently, in the newly released Annual book of prophecy which was compiled from March to June, Primate Ayodele noted that there will be destruction of lives and properties in South Africa if Zuma’s case isn’t handled well, we all know what’s happening now, the sudden change in leadership of GTBank was mentioned in this book, in the areas of sports too, Primate Ayodele accurately prophesied the outcome of Euro 2020 and COPA America  semi finals and final matches during live services on his facebook page, this was not recorded, it was a live broadcast before the match were played, they came to pass exactly how he said it (See his facebook page here https://web.facebook.com/inrievangelical) , these are just 0.01% of Primate Ayodele’s prophecies.

Finally, I would love to advise him to remember that South west remains his home after President Buhari’s tenure ends, He has allowed himself to be used as a weapon against his people for too long, the remaining years of his in power should be to retrace his steps and not cause more damages for himself, if not for his sake but for his family who are also full of shame on his behalf.