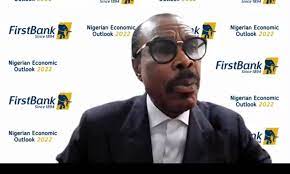 The Chief Executive Officer (CEO), Financial Derivatives Company, Bismarck Rewane has predicted that Nigeria’s financial services sector is expected to grow by 8.32% in 2022.

Bismarck Rewane stated this at the Nigerian Economic Outlook 2022 webinar organized by First Bank of Nigeria Ltd. on Thursday, January 13, 2022.

He attributed the growth to the increased collaboration of Fintechs and traditional banks as they aggressively try to increase financial inclusion, while also citing that tier-1 banks would leverage their robust customer base and balance sheet size.

According to NAN, "There would be aggressive digital innovation and lending solutions as well as possible mergers and acquisitions within and across tiers to boost the capital structure."

Rewane also predicted that the manufacturing sector is likely to grow by 4.70% in 2022.

He predicted that the growth in the sector would be due to an improvement in foreign exchange liquidity and increased product innovation. According to him,

"Players would benefit from volume and value growth. Top players (Nestle Nigeria and Unilever) will report profit growth of 20% in 2022."

"The agriculture sector is likely to grow by 1.6% in 2022. An efficient rail system will ease logistics constraints and boost productivity."

Rewane also added that the ICT industry, which outperformed in 2021 due to regulatory support and globally increased demand, would likely grow by 9.72% in 2022 with telephone penetration experiencing a huge increase.

"There will be a surge in Fintech and mobile payments, while the increased level of activities will be supported by 5G operations. The sector will consolidate within the year," he said.

Rewane also noted that the country’s economic performance would largely be determined by the successful implementation of the 2022 budget, contentious fuel subsidy removal, and the newly approved five-year development plan.

He believed that inflation would decline in Q3 and Q4 and that this decline would be positive for consumer purchasing power, adding that monetary tightening in advanced economies could trigger capital outflows.

He further noted that reform could be impeded by political considerations and labour union activities within the year, saying that insecurity could prove tricky to contain and would become a political campaign tool for the opposition.

He also believed that the subsidy issue would be resolved by 2022, as the likely benefit would outweigh concerns about its elimination.

Rewane also said that the foreign reserve will be reduced as the Central Bank of Nigeria (CBN) will likely increase foreign exchange supply to manufacturers to ease currency pressures.

Pre-election spending would be positive for aggregate demand and would also boost corporate performance.

He also noted that the forthcoming general election will increase foreign demand pressures in the fourth quarter of the year.

On the risk matrix in 2022, policy reversal and delayed reforms heightened social unrest spurred by high unemployment and poverty levels, and the financial sector crisis, among others, are things to watch out for.