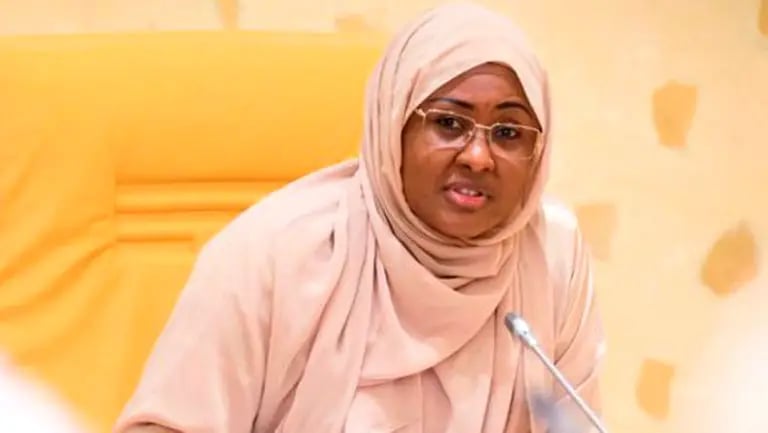 Aisha Buhari, the first lady of Nigeria has called on the country's Military, Ministries and department to remain committed and responsive in tackling Gender-Based Violence (GBV) in the country.

She said there is need for stakeholders to work together to strengthen women’s voices and bring about goals set in the United Nations Resolution 1325, to achieve the call for equity and equality.

On her part, the Women Affairs Minister, Dame Paulen Tallen disclosed that the conference was organized by the Federal Ministry of Women Affairs, Defence Headquarters and supported by UN Women and the British Military Advisory Training Team (BMATT). The 2021 theme was holding on the wings of the 16 Days of Activism Against Gender-Based Violence

According to the Tallen, the theme which is “Mainstreaming Gender in National Early Warning Systems and Security Challenge,” seeks to build on the global momentum around the United Nations Security Council Resolution (UNSCR) 1325 on Women, Peace and Security Agenda and similar Conventions championed by the United Nations, African Union, ECOWAS Commission and the Federal Government of Nigeria, as well as the success recorded since the hosting of the first edition in November 2020.

She said, “The uniqueness of this Conference is that it helps to consolidate the current civil-military relationships crucial to the realization of the peace and security of this country.

“Today, it is all about the Women in the Security Sector to share their life experiences and contribute to a participatory process in advancing gender balance. It also spotlights the men who have supported them to climb the peak of their careers.

“Recalling that the UNSCR 1325 was unanimously passed by the Security Council on the 31 of October 2000 as the first of several Resolutions on ‘Women, Peace and Security (WPS), Dame Tallen said, “This Resolution, with its four pillars of Prevention, Participation, Protection and Peacebuilding and Recovery, has become the focal point for galvanizing worldwide efforts to deal with the many challenges that women face in situations of conflict.

“The main instrument for the implementation of the UNSCR 1325 by the UN Member States is the National Action Plan (NAP). The NAP acts as a key platform for countries to set priorities, coordinate action and track progress; prompt meaningful changes in behaviour, policies and funding; provide civil society with a mechanism to hold governments accountable; and create space for governments, multilateral institutions, and civil society to work together for greater impact”.

Speaking further,the minister explained that, the launch of the Gender Policy for the Armed Forces of Nigeria under the able leadership of General LEO Irabor, Chief of Defence Staff and upgrading the position of the Gender Advisor to a Directorate cadre, “We were hoping that the Chief of Defence Staff as our true HeforShe Champion would have elevated the present Senior Officer occupying that Office to a Major General as an icing on the cake for Nigerian Women.

“At least, this will leave a legacy for this administration and encourage more women in the Military to aspire, knowing fully well that such a seat is the exclusive preserve of the Women. But, all hope is not lost as I am confident that even before the end of this event, the CDS can still raise the bar for women in the Military.

“The contributions of the Nigeria Army, the Navy and the Air Force through the concerted efforts of all the Security Chiefs in ending insurgency and emerging crimes across the country cannot be overemphasized.

“The Nigerian Women are saying thank you, but we are asking for more women to feature in the highest decision-making ranks of the various Services. In the same vein, the Nigeria Police Force has also shown commitment more than ever before in the appointment of a Gender Advisor and is concluding the process of reviewing the Nigeria Police Gender Police under the leadership of the IGP Usman Alkali Baba and the introduction of pro-gender sensitive policies to address the growing menace of GBV in the country.

In her welcome address, the Gender Adviser at Defence Headquarters, Brig Gen (Mrs) CA Thomas said the armed forces of Nigeria have developed and implemented various policy and programmatic initiatives have been developed by Armed Forces of Nigeria in partnership with related ministries, departments and agencies and civil society organisations to mainstream gender in Nigeria’s security sector, governance structures and institutions in a way that promotes Nigeria’s early warning and response architecture.

“This Forum, therefore, provides a platform to assess and reflect on these initiatives and the progress made so far in achieving the aims and objectives of the National Action Plan 2017 -2020 formulated as the guiding framework on Women Peace and Security in Nigeria.

“The First Annual Forum held in Nov 2020 highlighted the successes, gaps and challenges that persist in the participation and leadership of women in the security sector and made far-reaching recommendations among which are the need for continuation of the Forum on yearly basis.

“This Second Security Sector Forum will therefore focus broadly on operationalising the existing gender mainstreaming policies in security institutions as relates to the theme of the Forum, i.e. early warning and response, sharing lessons and good practices among the SSIs with the policy or and understanding the progress in the SSIs without the policies while reflecting on the role of women in the security sector in the task of addressing current security challenges in different parts of the country.

“The specific objectives of the Second Annual Forum are to assess progress on implementation of some of the recommendations and commitments that were made at the first Annual Forum; provide the platform for experience sharing on the progress, challenges and opportunities to fast track the implementation of the gender policies and other efforts to increase women’s participation and leadership in the security sector in Nigeria.