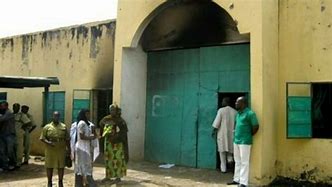 It is no news again that the increased rate of prison or shall we say correctional centre breaks in this second term of the Muhammadu Buhari is alarming.

Prison breaks are not new to Nigeria but the sudden escalation in recent times is indeed worrying.

From Kogi to Edo, to Oyo and other states, there have been reports of prison breaks stemming from. Issues and problems that have been existing for years and two which authorities have refused to deal with and have turned a blind eye to.

Like the proverbial no condition that is permanent, these problems have got to a point where the prisoners have rebelled and taken matters into their own hands.

Nigeria is a democracy and free citizens have the right to protest. Prisoners too, have also taken their own protests to another new level; where they break from prison all in a hope of escaping the nightmare called Nigerian correctional centres.

AllNews Nigeria Presents five causes of prison breaks and steps that could be taken to prevent the reoccurrence of this ugly development.

1. Poor state of the prisons infrastructures

When the Muhammadu Buhari administration appointed Rauf Aregbesola, former Osun Governor as Interior Minister, there were fewer scattered incidents of prison breaks and when it did occur, it was usually due to one complaint or the other on the part of the inmates which has gone unheeded.

It is a known fact that Nigeria inherited its prison system from the British colonial overlords who themselves have one of the best prison and correctional systems in the world. The prison which was bequeathed to Nigeria was a system that was meant to silence dissent and voices of opposition. It was meant to be dehumanising and to break the inmates. This is what Nigeria inherited from our colonial masters.

That is why you will see a prison facility that was built in the early part of the 20th century still retaining its early features. It is also for the same reasons that there have been cases of prison overpopulation. Even Nigeria's most modern prison, the Kuje Minimum Security Prison is beginning to display signs of the rot that has characterised its predecessors.

It is no news that prison cells are cramped, health facilities are down and some prisoners basically have to see to their own welfare personally. That is for those that have the means to do such.

Probably, this is why Minister Aregbesola thought it wise to change the name from the Nigerian Prison Service to the Nigerian Correctional Service.

In 2020, Nigerian investigative journalist, Fisayo Soyombo carried out a risky and dangerous three-in-one investigation of the Nigerian Police, Justice system and correctional service.

The findings and revelations from the investigation was a bomb blast and it brought to life the many tales Nigerians have heard about the decay in these three vital units of Nigeria's justice delivery system.

At great peril to his own personal safety, Soyombo was able to reveal to the world how money has been the factor in determining how and who the system affects positively or negatively depending on how one perceives it.

The revelations from the investigation were so damning that they got the attention of the late Chief Of Staff to the President, Abba Kyari and Minister Aregbesola. At the time, the then Chief Of Staff to the president, The late Abba Kyari and Rauf Aregbesola assured the Nigerian public that the reports from the investigative pieces would be scrutinised in government quarters and adequate actions would be taken.

Till now, not much in terms of addressing the ills highlighted in the series has been achieved.

3. Current security situation in the country

Since 2009, Nigeria has been battling with Boko Haram insurgency in the North East and of recent, Fulani herdsmen and bandit menace in the North West and pro-Biafran and Oduduwa Nation agitation in the South East and South West. Taking a survey of prison breaks in the recent months starting from 2019, these incidents have occurred with the active collaboration of these criminal non-state actors.

The breaking into prisons from that time has been one carried out to spite the government as most of these incidents has happened from outside with the intention of freeing and recruiting these inmates upon attainment of cheap freedom.

For one reason or the other though, these escaped inmates always come back after a few days when luck runs out on them or when the elements start to take their toll on them.

Also, it is easy for these insurgents and bandits to see inmates as fresh recruits for their ventures since most of them have a background in criminality.

To feed a prisoner per day in the past in Nigeria's correctional facility cost N450:00 until recently when a review was brought by the Nigerian Correctional Service to the National Assembly seeking an upward review to N750:00.

After several deliberations, the legislators sought to increase it to N1,000:00. This increase is due to the inflation and high cost of living that has assailed the country since the beginning of 2021.

Also, many inmates have been documented to have died from ailments they picked up while in these facilities and also inmates who has underlying ailments prior to being incarcerated ended up dying because of inadequate medical attention while behind bars. Only a few who fought through the courts and those who have the wherewithal have largely escaped unscathed.

Many inmates who began their prison sentences healthy end up being the direct opposites of themselves and some have been known to develop skin diseases and other deadly infections while in the prison.

This situation has spurred many inmates to decide to protest the shabby treatment being meted out to them by prison authorities.

5. Carryover of colonial mentality and recruitment of less qualified personnel

Taking a look at the correctional system bequeathed to Nigeria by the British, it was a system of punitive measures against the locals.

Many of the prison officials or jailers were trained to be taskmasters who exerted much pressure on inmates. Instead of prisons being a reformative and correctional centre, it became a place where hardened criminals are born and the products of the system became more ostracised.

Most of these factors outlined above have contributed one way or the other in causing frustration amongst inmates and may have led to reasons why inmates break out of prison.

The truth is Nigeria needs urgent prison and justice reform. The Interior Minister, Rauf Aregbesola have called for this. We are waiting for the government to take a positive step in that direction.

The recent break-in Apolongo Correctional Facility, Oyo was bad enough for the country, though many inmates have been rearrested, some are still at large.