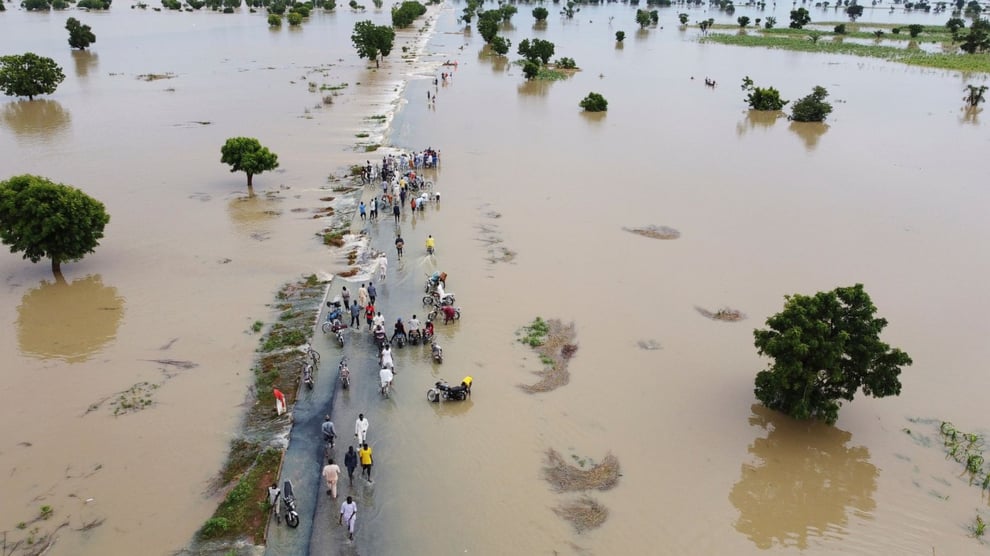 The Ijaw Diaspora Council (IDC) has called on President Muhammadu Buhari to declare Ijawland a disaster zone following this year's flooding in the area.

They made this known through an open this was open letter addressed to the President and signed by the President, IDC, Prof. Mondy Selle Gold on Wednesday.

IDC pointed out that the letter to Buhari was to draw his attention to the ravaging flood that has devastated most of the Ijaw states in the Niger Delta region.

The letter reads in part, “Mr. President, the impact is so severe that it’ll take years for many communities to recover.

"This no doubt has compounded the immense environmental pollution and its associated health issues the Ijaws have been facing for decades now.

"The following are also ‘albatrosses’ the people are forced to contend with.

“It is no news that flood of 2022 was more ferocious and devastating than the 2012 flood.

"The destruction of lives and properties is unprecedented and is clearly the worst in our history.

"The rising floodwaters sacked and rendered our people homeless.

"It overtook our fishponds and farms, damaging crops, seeds and seedlings.

"Business activities came to a halt as shops, schools, and government offices closed down.

“Critical roads were washed off and made impassable as access to Yenagoa, the Bayelsa State capital, from Rivers and Delta state through the East-West Road was cut off.

"Boats and canoes became beds, kitchens and the only means of transportation within our towns and villages.

"In most parts of Ijawland, people wade through water to move from one place to another.

"Prices of foodstuffs were not spared as inflation has soared.

"That 100 per cent increase in the price of a bag of rice reflects price increases in essential commodities, including and other food items.

“Petroleum products too have taken a serious hit, leading to scarcity.

"Under such conditions, epidemics broke out and became rampant.

“Short-term measures by the Bayelsa State Government of Bayelsa State to provide temporary shelters mitigated and reduced the severity of the effect for people in the state capital, but it was not enough to cover the entire State.”

The Council demanded urgent construction of dams, canals, houses on higher grounds to accommodate the people in case the flood strikes again in future.

“Mr President, as a way forward, we are proffering the following solutions and remedies: Build reservoir dams to control the water from the Lagdo dam in the Republic of Cameroon whenever they decide to release dammed waters.

"The dams will reduce the volume of water flowing downstream and thereby minimize the impact of flooding.

"Added benefits would be the generation of electric power as well as irrigating opportunities for adjoining farmlands.

“The opening of canals between towns in Ijawland for easy movement of personnel by boats since the perennial flooding occasioned by climate change will be part of their existence.

“We must strengthen the institutions set up to manage disasters and emergencies, such as the National Emergency Management Agency and the state counterparts.

"These institutions must have access to relief materials early enough to meet the kind of emergency we faced with this flood.

“Use town planning to ensure that future infrastructural development and housing are done on high grounds in the towns and cities in the Niger Delta and other parts of Nigeria.

"The planning should incorporate and collaborate with relevant agencies to develop early warning systems and make adequate plans to meet imminent natural disasters.

“The response was fast in state capitals like Yenagoa but slow in the local government areas.

"We therefore propose that structures like civic centers in the LGA headquarters be built and used as temporary shelters for victims of natural disasters as well as being put to other uses when necessary.

“It has become imperative, Mr President, for high-level government officials to visit the affected areas, provide emergency relief materials for the victims and provide seeds, seedlings and plant cuttings for use in the next planting season.”