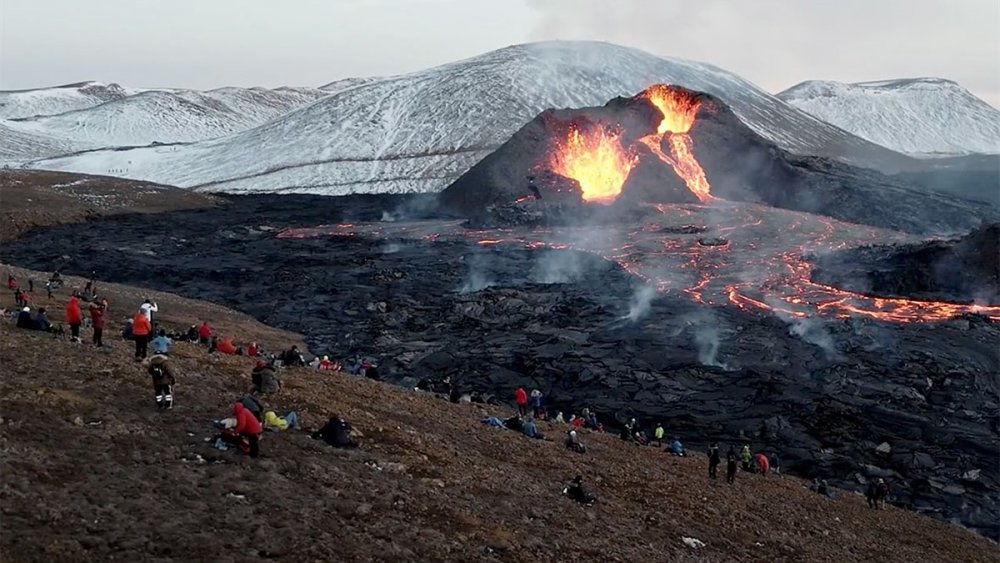 A volcanic eruption has sparked a forest fire on Lembata Island in eastern Indonesia, the country’s disaster management agency said on Friday.

Mount Lewotolo erupted on Thursday, sending a column of ash about 800 meters into the sky, according to the volcanology agency.

“Attempts to extinguish the fire that has ravaged the slopes of the volcano have been unsuccessful,’’ said Abdul Muhari, spokesman for the National Disaster Management Agency.

“The fire spots are in areas that are difficult to reach and dangerous, and the fire-fighting equipment is not adequate.’’

Photos released by the agency show smoke glowing at night as incandescent material burned vegetation on the volcano’s slopes.

The agency sent a water-bombing helicopter to try to douse the flames, Muhari said.

Residents have been mobilized to clear the grass to prevent the fires from spreading to their homes, said local district, Chief Thomas Ola.

“Our hope is that the fires will eventually die out naturally because people are not able to go up there.

“I was told they were sending a helicopter but it hasn’t arrived yet,’’ Ola said.

In April, dozens of people living near the 1,423-metre volcano were killed after tropical cyclone Seroja triggered an avalanche of volcanic material that buried their villages.

He said Indonesia sat on the so-called Pacific Ring of Fire, an area known for seismic upheavals, and has about 128 active volcanoes.

Several other volcanoes in the archipelago, including Sinabung on Sumatra Island and Merapi on Java, have been erupting intermittently in recent months.

Nigerians are everywhere across the globe with Indonesia as no exception. Records from the Indonesian Embassy in Nigeria revealed that there are about 5,000 documented Nigerians living in Indonesia.

The above figure may however be just a fraction of the total number of Nigerians in Indonesia as most Nigerians there are largely undocumented.

It was gathered from The Sun that less than three percent of the total known number live legally and are engaged in legitimate businesses in the country.

The Indonesian embassy in Nigeria is located at No 10 Katsina-Ala Crescent Maitama, Abuja, Nigeria. Hakeem Balogun is the current Nigerian Ambassador to Indonesia.