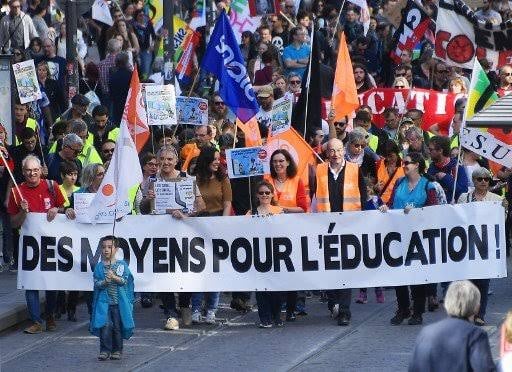 Thousands of French teachers protested against the government’s COVID-19 rules, as they took to the streets to demand better protection for pupils and staff.

Elisabeth Allain-Moreno, the National Secretary of the SE-UNSA teachers union on Thursday, said that;

“We had reached such a level of tiredness, and anger that we didn’t have any other option but to organize a strike to send a strong message to the government."

In the protests, many called for the resignation of the Education Minister, Jean-Michel Blanquer.

Al Jazeera reported that the protesters believe that the rules in place are too complicated and unmanageable.

Some schools were closed on Thursday because of the strike, others were open only for children of health workers.

A large number of teachers, including 75 percent from primary schools and 62 percent from high schools joined the one-day strike.

Infections have risen in French schools with the country's daily record standing at 370,000 cases.