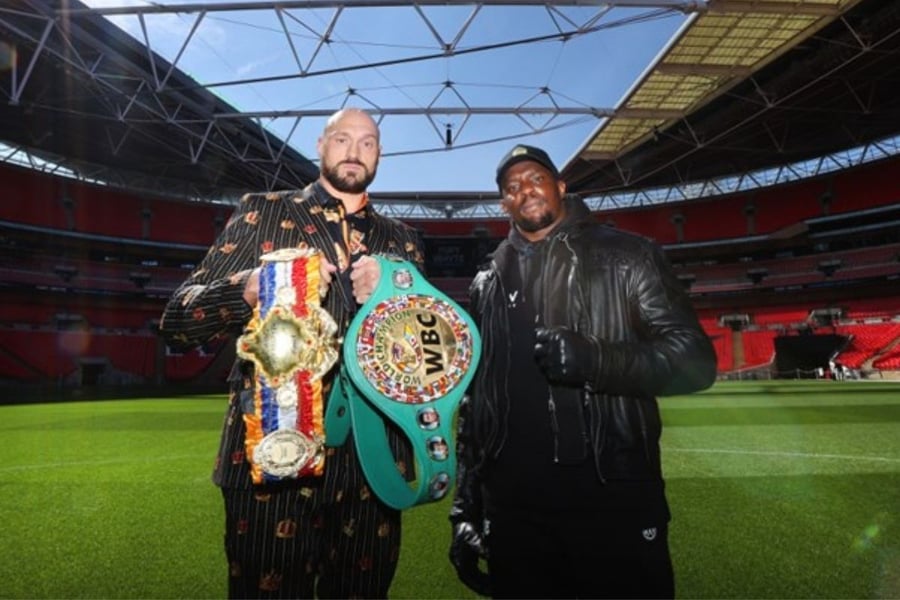 Tyson Fury will defend his WBC heavyweight title in front of a British record boxing crowd of 94,000 at Wembley on Saturday as Dillian Whyte finally gets his shot at becoming a world champion.

Fury claims his first fight on home soil since 2018 will be his last before retirement.

There have been suggestions Fury would attempt to unify the heavyweight division against the winner of a rematch between Oleksandr Usyk and Anthony Joshua.

But the 33-year-old wants to bow out in style with a successful title defence against Whyte.

"(I'm a) two-time undisputed champion, 150 million in the bank, nothing to prove to nobody," said Fury last month when he promised to be "fully retired after the fight".

Fury is the strong favourite to stretch his unbeaten record to 33 bouts, but the British fighter said his compatriot and former sparring partner deserve respect.

"He's a good fighter," said Fury at Wednesday's pre-fight press conference. "A good, strong, solid man. He has good punch with good power - he's knocked out a lot of men.

"He's definitely a man who needs a lot of respect and that's what I've given him by my training camp. I've trained as hard for Dillian as I have for (Deontay) Wilder, (Wladimir) Klitschko or anybody.

"I see the odds and laugh a bit because they're coming from people who don't know anything about boxing.

"This is heavyweight boxing. Anyone can win with one punch. If I'm not on my A Game, this guy will knock my head right off my shoulders."

Fury's fight week has been dogged by questions over his connections to alleged crime boss Daniel Kinahan.

Fury has previously mentioned Kinahan, who was recently hit with worldwide financial sanctions by the US government, as a "key advisor".

Dubai-based Kinahan, who has always denied any wrongdoing, is alleged to be one of the leaders of a cartel the US authorities accuse of smuggling drugs, money laundering and violence.

MTK Global, the boxing company founded by Kinahan, announced this week it is ceasing operations.

"Has it been a distraction? Not really," said Fury when pressed on his current relationship with Kinahan. "It's got nowt to do with me, has it?"

Whyte, who boasts a 28-2 record, has plenty to prove after feeling unfairly passed over by Fury when he fought Wilder three times.

Jamaica-born Whyte moved to the UK with his family when he was 12, fathered the first of his three children a year later and was shot and stabbed after being drawn into London gang culture in his youth.

Now he believes he can be the man to finally beat Fury.

"I still believe that anybody I touch to the head or body can get knocked out."