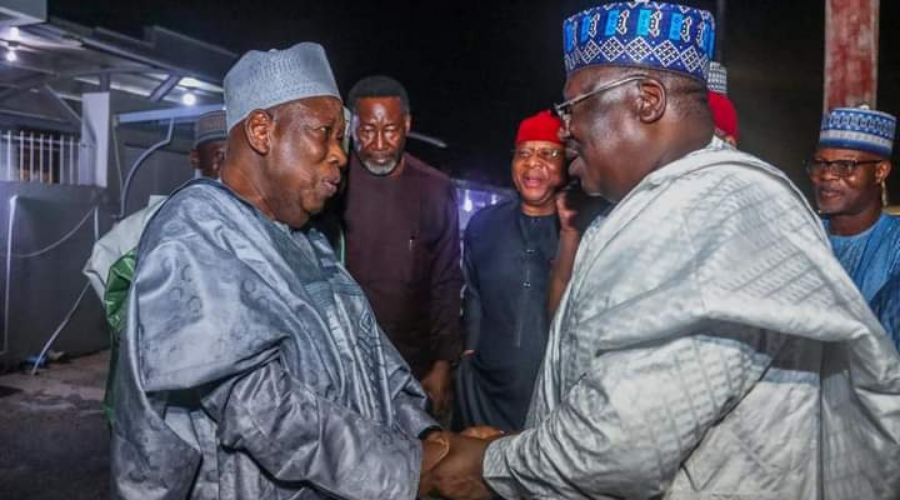 Governor Abdullahi Ganduje of Kano State has assured the Senate President, Ahmad Lawan of "full cooperation" over his ambition to stand as the flag bearer of the All Progressives Congress(APC) in the 2023 Presidential election.

Governor Ganduje described Kano State as a swing state in party primaries and even in presidential elections and declared that Kano State would swing when it is ready to swing.

A statement signed by Ola Awoniyi for Ahmad Lawan Presidential Campaign Organisation on Sunday and issued to newsmen in Kano said the Governor spoke on Saturday night while Lawan was on a visit to see the party delegates in Kano ahead of the upcoming Presidential primaries of the All Progressives Congress (APC) scheduled for end of this month.

According to the Governor, the people of Kano are aware of Lawan's sterling qualities and his contributions to the stability of politics and governance in the country.

"Your Excellency, I want to inform you that we are fully aware of your capacity.

"We are fully aware, the way you handle the National Assembly, the House of Representatives and the Senate, which you are the chairman.

"If we can recall with nostalgia what happened between 2015 and 2019, we are all living witnesses that we had a lot of instability, poor relationship between the Legislature and the executive.

"Infact, we had a situation where, in one day, 15 Senators from APC defected to PDP from the Senate Chamber.

"Your Excellency, I'm saying all these things in order to show your political dexterity in managing the National Assembly, in managing the relationship between the Executive and the Legislature.

"Today there is peace, cordial relationship between the Executive and the Legislature and we believe if you become the President of the Federal Republic of Nigeria, we can expect peace and stability between the Legislature and the Executive, with the Institutions of the Federal Republic of Nigeria, with the sub-national government in the states, with the Local Governments.

"So Your Excellency, we assure you of our full cooperation.

Ganduje emphasised on what made Kano so important in the political calculations of Nigeria.

"Kano State has the largest number of delegates in the country.

"There is no gainsaying about that. This follows from the fact that we have the largest population in the country.

"So Your Excellency, this state is a very important state when issues of elections are concerned.

"Therefore, they are part of the statutory delegates in Kano State and in Nigeria.

"We have over 4,000 elected councillors in Kano state.

"And most of our 400 legislators especially House of Representatives, Senators, former Senators, principal officers of the state Assembly and National Assembly, Your Excellency, both of them, we are together and we are intact.

Speaking at the forum which held at the Coronation Hall of the Kano state government House, Lawan said his mission was to interact with the party delegates on his presidential bid ahead of the primaries.

"I'm here to see and interact with all the 500 delegates from Kano State and I cannot agree more with my leader when he said this is the largest sub-national democracy in Nigeria.

"I imagine that it could also be the largest sub-national democracy in Africa.

"When His Excellency, our Governor was rounding up his speech, he said Kano is a swing state and it can determine not only the Primaries, with 500 delegates, but also the general elections.

"Your Excellency, it will swing to my side by the Grace of God.

"My brothers and sisters, distinguished delegates, I promise you that when eventually we discuss and find common ground with His Excellency and vote for me, you will for ever be pleased with the way and manner I will lead this country because it is not possible for anyone to lead the country like Nigeria without the presence and contributions of people like Governor Abdullahi Ganduje," Lawan said.

The Senate President thanked Governor Ganduje for the warmth reception and commended him for his achievements in Kano both in security, governance and party politics.