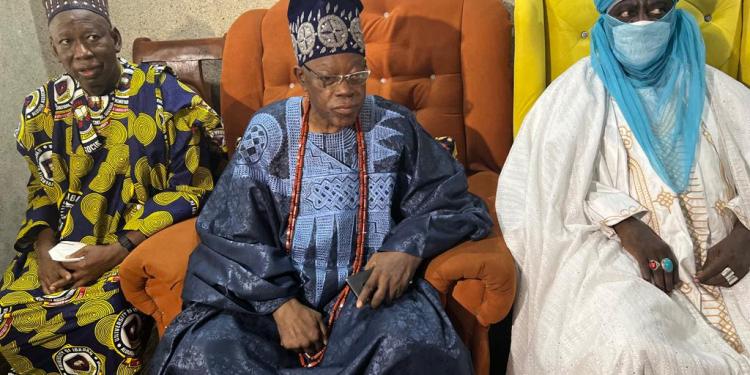 Following the installation of Lekan Balogun as the 42nd Olubadan on Friday, March 11 by Governor ‘Seyi Makinde, Kano State Governor Abdullahi Ganduje and Emir of Kano, Alhaji Aminu Ado Bayero have paid a congratulatory visit to the newly installed Olubadan of Ibadan in his palace.

The visit on Saturday was to rejoice and felicitate with the new Olubadan on his ascension to the throne of his forefathers.

In his homage, the Emir of Kano, Alhaji Aminu Ado Bayero told Oba Balogun that both the government and traditional institution in Kano state were happy for him, and described him as one of them.

The new monarch, who traced his relationship with Kano through his friendship with both the late Alhaji Abubakar Rimi and Alhaji Balarabe Musa, both former governors of Kano and Kaduna states respectively, said he always felt at home any time the name Kano is mentioned around him.

Oba Balogun is a former lecturer at Ahmadu Bello University (ABU), Zaria, and a director at Kano State-owned Triumph Newspapers.

Balogun while appreciating the visit said it rekindled fond memories of his good old days in northern Nigeria and the relationship with his late friends.

He assured the team of his readiness to work together with them to strengthen the existing relationship between Ibadan and Kano towards making Nigeria a safe country for all irrespective of tribe, language and religion.

Earlier in his remark, Governor Ganduje told Oba Balogun that Ibadan is a home to every Kano person and vice-versa, noting that with his daughter, who is married to Idris Ajimobi, the son of the late former governor of Oyo State, Sen. Abiola Ajimobi, he had become part and parcel of the ancient metropolis, saying, “whatever affects Ibadan affects me.”

The governor said his knowledge of the relationship that existed between the new Olubadan and the late Rimi strengthened his love for Oba Balogun.

He enjoined him to continue to work towards the unity of the country which was very solid in the time past and which engendered the loving relationship between the late Rimi whom he described as his boss and the new Olubadan.

The Kano State helmsman disclosed that he bagged his Ph.D from the University of Ibadan 29 years ago, reminding all that he studied at the premier university.

Ganduje said as an alumnus, he is to deliver a lecture on security which made him seize the opportunity to pay homage to the new Olubadan.

He therefore enjoined the new Olubadan to maintain the cordial relationship existing between the two ancient metropolis.

Meanwhile, their entourage was led to the Olubadan’s palace by the former Secretary to the Oyo State Government (SSG), Alhaji Olalekan Alli; Special Adviser to the late Ajimobi on Media, Mr. Bolaji Tunji and Idris Ajimobi, an in-law to Ganduje.