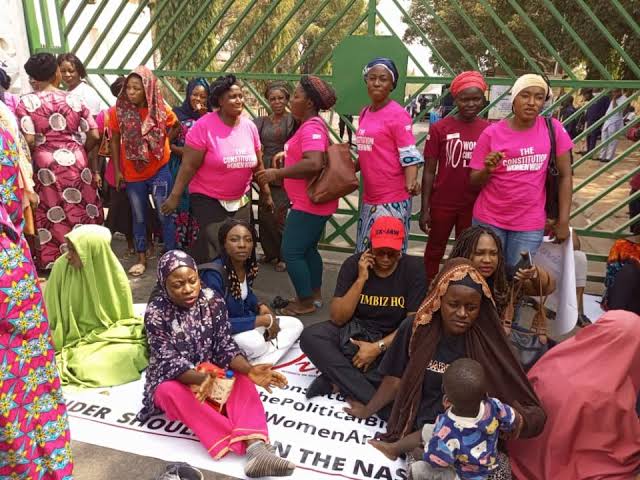 A convergence of women groups and civil societies have staged a peaceful protest at the National Assembly, blocking the entrance from motorists and individuals in demand for a reversal of the rejected gender bills.

The women were disappointed and aggrieved at the actions of the 9th National Assembly (NASS) when they denied women the opportunity of inclusion and representation in governance by voting against the bills.

Some of the demands by the women include the adoption of 35% affirmation at all levels, the creation of additional 111 seats in the National Assembly as well as at the state constituent assemblies.

Others include the granting of indigeneity rights to a woman who is married to an indigene of a state different from her state of origin, affirmation of citizenship rights to spouses of women from Nigeria under Section 26 (2) (a); and the inclusion of at least ten percent affirmative action in favour of women in ministerial appointments.

They expressed disappointment that all their commitments and capacity were been trashed with the rejection, adding that wife of the President, Aisha Buhari, and that of the Vice President Dolapo Osinbajo, had both joined forces to demand the bills to be assented to, yet the National Assembly voted against the bill.

Co-convener of the protest Dr. Abiola Akiyode-Afolabi described the situation as “a national disgrace”, adding that Nigeria has remained the least country on inclusion in governance at all levels of governance.

“All that Nigerian women have been asking for from years back is good governance yet there have been no justifiable reasons why their demands are not met. We have decided to stay here until our demands are met,” she said.

Similarly, the National President of the Women in Politics Forum, Ebere Ifendu, regretted that women’s rights were being trampled upon, stressing that it will no longer be business as usual for members of the National Assembly.

Rejecting these bills shows that the members of the NASS do not have any regard for their mothers, wives and children even when they say that they are heads of the home.

“We are calling on the NASS to reintroduce those bills and pass them, this is the way forward for us, it can no longer be hurt,” she stressed.

Also speaking, the Country Representatives of Action Aid Nigeria, Ene Obi, said the Nigerian government is responsible for the 35% affirmative action it signed in Beijing, stressing that it was time for that to be achieved just as she noted that other countries have moved to 50%.

“Women are doing a lot and sacrificing to raise their children yet they are being denied their rights when they are at the receiving end of bad governance.

“We need the imbalance of poor governance to be corrected because we are suffering from the bad governance. If governance is good we won’t be here today, and that is why we need inclusion to correct the wrongs,” she said.

The women demanded to see the Senate President and Speaker of the National Assembly Assembly for a one-on-one conversation, rejecting other members of NASS sent to resolve the issue.

“We came here without mats, pots and cooking utensils and we are ready to sleep here until they answer our call. We are not leaving here,” they said.