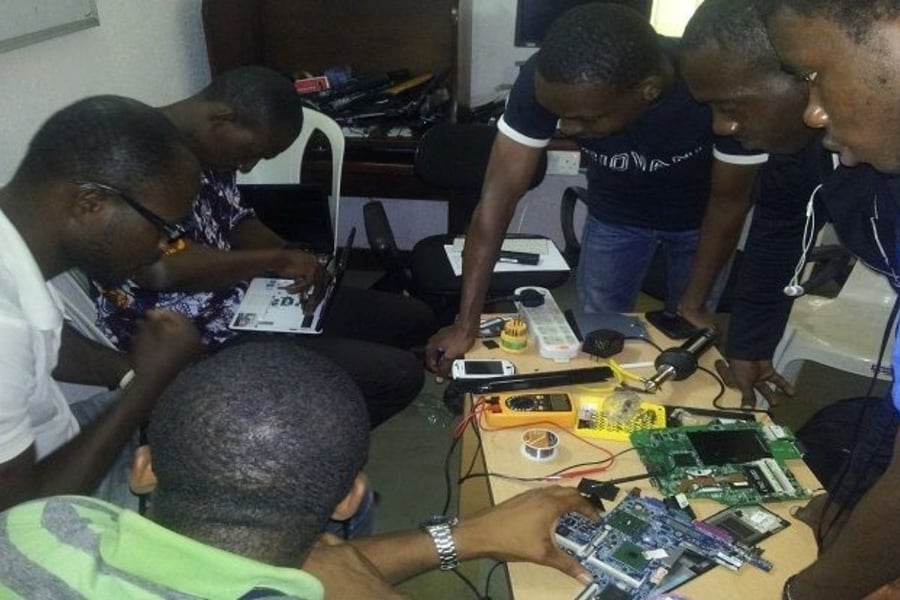 The Technical Advisor of GIZ, Oluwatosin Ilawole, during a facility tour on Tuesday of Botosoft Technologies Ltd., Ikeja,  said that the project was aimed at engaging the teeming youths in economic activities that would lead to sustainable income for them.

He said that the market for the repairs of mobile gadgets was very huge, and has the potential for engaging a large number of Nigerian youths.

"When we saw the potential in the mobile tech market for youths, we went into partnership with both SLOT Foundation and the Lagos State Technical and Vocational Education Board (LASTVEB).

"The partnership is aimed at looking at how to pilot an innovative model like the version of the German dual vocation system, where they have classroom training, practical and the third component which is a compulsory internship.

"The programme started last year for a period of nine months and the classroom training was held at LASTVEB for three months.

"Then, SLOT Foundation taught the trainees the practical aspect of mobile phone repairs and computer software among others for six months, “Ilawole said.

He said that after training the beneficiaries, the agreement was to get them into organisations that were willing to give voluntary internships.

Ilawole said that one of the places they got the voluntary internships for the trainees was Botosoft Technologies Ltd.

He said that apart from the internship which allowed them to gain more experience in fixing gadgets, they also gained permanent employment at Botosoft.

Also speaking, Dr Babatope Agbeyo, the Chairman of Botosoft Technologies Ltd., said that the project was aimed at taking unemployed youths off the streets and making them useful to society and also for such youths to have a sustainable income.

Agbeyo said that the purpose of bringing the beneficiaries to their company was for them to put what they had learnt practically into real-life use.

He said that it was also to encourage them and let them realise that it was possible to get employed if they learn well.

He said that Botosoft would be willing to retain 90 percent of the trainees as well as enrol those who would be considered outstanding in universities in order to acquire advanced knowledge in the skill.

He noted that the company’s vision was to empower as many youths as possible, particularly,  the ones that would be willing to learn.

Agbeyo stressed the need for more initiatives that would help reduce the number of unemployed youths in the country.

"If every company in Nigeria decides to employ five youths per year, the number of unemployed people in the country will reduce.

"On our own part, every year we employ about 100 youths for three months to work with us, ” Agbeyo said.

He lauded the German dual vocation system noting that such a model was worth emulating.

The head of training at SLOT Foundation, Mr Collins Uwadia, said SLOT partnered with GIZ, a body of the German Government doing a lot of projects in Nigeria, to build youth capacity, and also to give back to the society.

He said that the programme was an all-around training comprising: theory, practical and internship.

Uwadia said that the training which includes: how to repair phones, laptops and electronics would give them an opportunity to garner hands-on skills and be useful to the society.

GIZ is an international enterprise owned by the German Federal Government operating in many fields in no less than 130 countries.