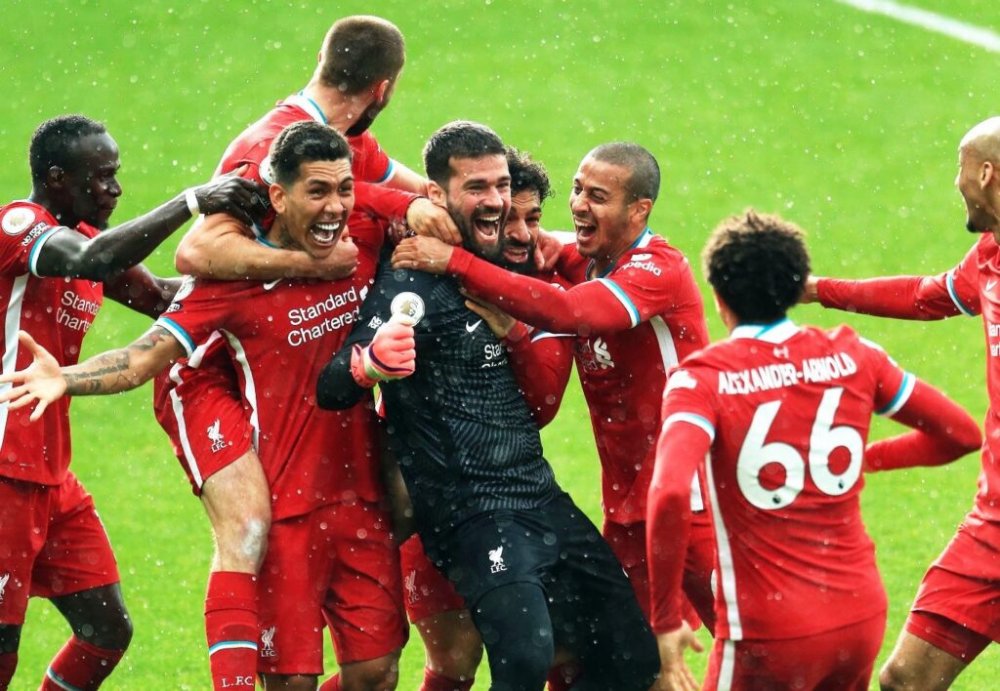 Liverpool goalkeeper Alisson Becker scored a 95th minute winner as the Reds beat West Brom 2-1 on Sunday to keep a place in next season's Champions League in their own hands.

But the Brazilian was sent forward for a corner deep into stoppage time and headed home Trent Alexander-Arnold's delivery.

Liverpool moved one point behind fourth-placed Chelsea and three behind Leicester.

With Leicester and Chelsea still to face off in a repeat of the FA Cup final, won 1-0 by the Foxes on Saturday, victories over Burnley and Crystal Palace will take Liverpool into the top four.

Alisson's father died in February after drowning in a swimming accident in his native Brazil.

"It's too emotional. For these past months for everything that happened to me, to my family, but football is my life," Alisson told Sky Sports.

"I play since I remember with my father. I hope he was here to see it, but I am sure he saw it with God on his side and is celebrating."

A first victory away to Manchester United in seven years on Thursday kept Liverpool's top-four fate in their own hands.

And after injuries ravaged their Premier League title defence, Klopp may feel his luck finally turned in a thrilling finale at the Hawthorns.

West Brom thought they had gone 2-1 up with 20 minutes to go when Kyle Bartley bundled home a corner.

The Baggies captain was onside, but Matt Philipps was deemed to have obstructed Alisson's view from an offside position.

Klopp has had to cope without any of his senior centre-backs for months after a series of injuries and the inexperienced pairing of Nat Phillips and Rhys Williams were easily troubled early on.

Hal Robson-Kanu latched onto a simple long ball forward on 15 minutes with Phillips playing the Welsh striker onside and he coolly slotted home his first Premier League goal since 2017.

Sadio Mane reacted angrily to being dropped in midweek as he shrugged off Klopp at full-time as the German celebrated victory against United.

The Senegalese returned in Diogo Jota's absence through injury, but his poor form showed little signs of improving as he side-footed a glorious chance wide from Thiago Alcantara’s cut-back.

Thankfully for Liverpool, Mohamed Salah has remained deadly in front of goal and he fired home his 31st of the season to level on 33 minutes from the edge of the box.

Roberto Firmino then hit the post as the visitors ended the first-half on top.

Even when Mane did find the net early in the second period he was denied by the offside flag.

West Brom had more reason to complain when Bartley's goal was controversially ruled out.

Chances continued to come and go for the visitors as Alexander-Arnold blasted over before Sam Johnstone denied Thiago and Gini Wijnaldum curled just wide.

But the most unlikely source came up with the winner as West Brom were caught napping from Alisson's late run into the box to meet Alexander-Arnold's corner.