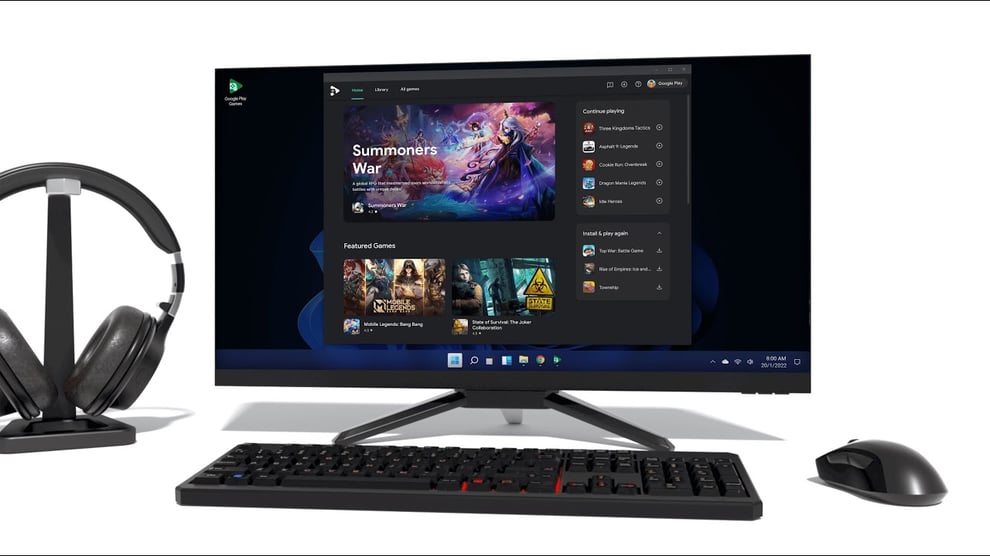 In South Korea, Hong Kong, Taiwan, Thailand, and Australia, Google Play Games for PC, a tool that enables users to play Android games on Windows, is now open to all users as an open beta.

This was revealed by Google on Thursday.

Earlier this year, the company launched a restricted test in which players who were interested may access the platform by signing up for a waitlist.

They won't have to wait for an invitation thanks to the recent announcement.

With the addition of Thailand and Australia in March, the limited beta initially only allowed a select few players in South Korea, Hong Kong, and Taiwan.

The search engine behemoth added that in order to allow more users to enjoy these games, it is also lowering system requirements.

A PC with at least an eight-core CPU, a "gaming-class GPU," and 20GB of free storage space was required for the prior beta.

These specifications are lowered for the next open beta to a four-core CPU, an integrated GPU, and 10GB of free storage.

Google claimed that it now offers more than 50 Windows users games that are compatible with PCs.

Using the same Google ID on their Android phone, players may pick up where they left off in a game they started on a PC.

“In the last few months, we have more than doubled our Google Play Games catalogue to 50+ titles, which can be played on Windows PCs via a standalone application built by Google.

"Our catalogue includes many of the most popular mobile games in the world including Summoners War, Cookie Run: Kingdom, Last Fortress: Underground, and Top War.

Together, these games are played by hundreds of millions of players globally,” the company said in a blog post.

Amazon and Microsoft have teamed up to distribute Android apps to PC users, while Google is in charge of Android game distribution on Windows.

Users in the United States were allowed to download Android applications using the Amazon App Store thanks to the Windows 11 Insider Program.

The business last week included Japan in the preview.