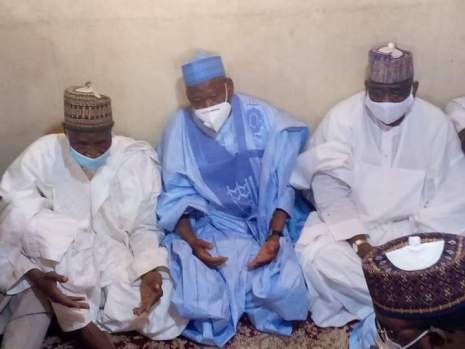 The parallel congresses conducted by the Abdullahi Ganduje faction of the APC had produced Abdullahi Abbas as Chairman and the Ibrahim Shekarau led group also had Ahmadu Haruna Zago emerged as Chairman.

However, in a ruling by an FCT High court, presided by Justice Hamza Muazu on December 17, 2021, upheld the Congresses conducted by the Ibrahim Shekarau faction that produced Ahmadu Haruna Zago as Chairman.

Justice Muazu also imposed a fine of N1 million against the Ganduje led faction for filing “a frivolous and time-wasting motion.”

Meanwhile, the Ganduje led faction has gone ahead to file appeal over the rulings at the court of appeal.

In a Facebook post, the governor’s new media aide, Abubakar Ibrahim, said Ganduje was accompanied on the visit by Abdullahi Abbas and some cabinet members.