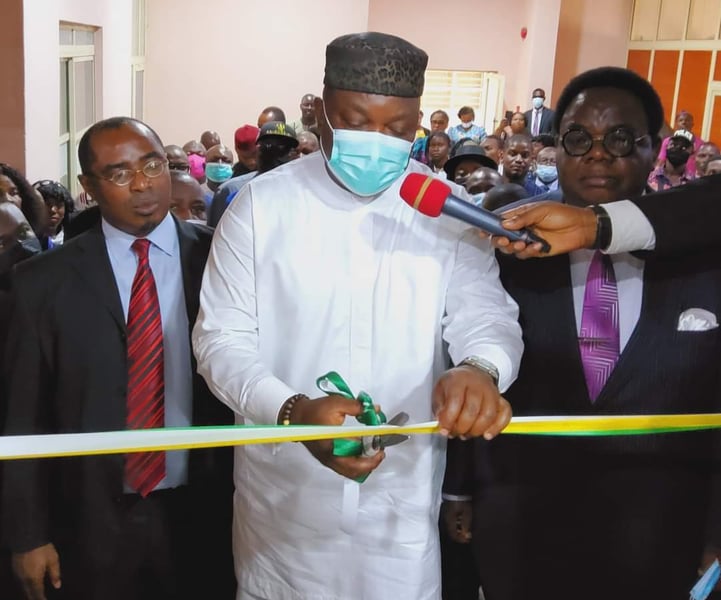 Governor Ifeanyi Ugwuanyi of Enugu State, on Friday, listed numerous remarkable achievements his administration has made in the provision of modern facilities in the State Judiciary to facilitate the dispensation of justice both in the urban and rural areas.

Ugwuanyi disclosed that his administration has provided modern courtrooms properly equipped to ensure a conducive atmosphere for efficient dispensation of justice.

The governor added that his government has within the last six years created two additional Judicial divisions and six additional Magisterial districts to decongest courts for timely dispensation of justice.

He said that the landmark projects are in addition to the building and equipping of 24 Magistrate Courts (16 of which are brand new) as well as the construction of 34 brand new model Customary Courts (two per local government) across the 17 local government areas of the state.

The 34 Customary Court buildings which were described by the President, Customary Court of Appeal, Enugu State, Hon. Justice George Chibueze Nnamani, as part of Gov. Ugwuanyi's administration’s unprecedented infrastructural interventions in the State Judiciary as well as its urgent efforts at repositioning the Customary Courts to give them a new lease of life and relevance in line with international best practices for efficient and effective dispensation of justice in the rural areas and beyond, were inaugurated simultaneously across the 17 LGAs, on Friday.

Speaking during the inauguration of the Justice Chima Centus Nweze Moot Court, at the Faculty of Law, University of Nigeria, Enugu Campus (UNEC), Gov. Ugwuanyi pointed said, “A central part of my commitment, as Governor, has not only been delivery of justice but also, its speedy delivery to all classes of people without prejudice to socio-economic status or influence”.

The governor who commended the Faculty of Law for the provision of the moot court, worthily named after Hon. Justice Chima Centus Nweze of the Supreme Court, and other facilities appropriate for students’ training, revealed that “there is, therefore, a resonance between the commissioning of a moot court scheduled today and the great strides my administration has made in the provision of modern courtrooms properly equipped to facilitate the dispensation of justice”.

He stated that the state government has in the past supported the growth and development of the faculty “and will continue to do so whenever opportunity avails the state”.

Gov. Ugwuanyi also commended the Dean, Faculty of Law, UNEC, Dr. Samuel Nwatu, and his team for the push and drive to give the faculty a new face in order to restore its prime place as the first Faculty of Law in Nigeria.

“A moot court is essentially a student’s fictional court used by most faculties of law to expose their students to real courtroom situations through simulated court proceedings with students preparing and arguing cases before a pseudo or a make-believe judge.

"The presence of a moot court is always a clear and strong indication that students are being prepared for post-school professional practice”, he said.