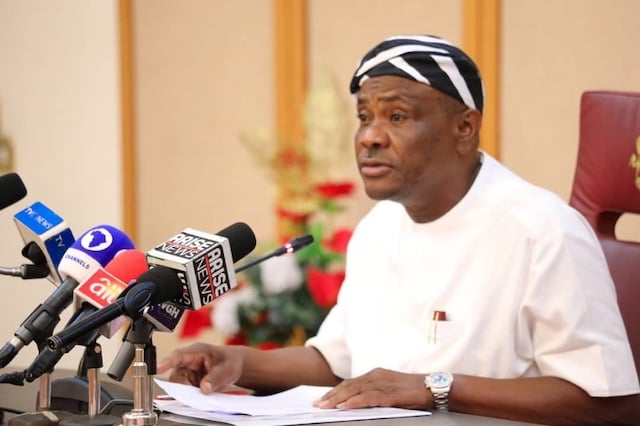 Rivers State Governor, Nyesom Wike, has admitted that the Muhammadu Buhari led federal government has made progress in the fight against insurgency in Nigeria.

Wike was however quick to point out that the progress was not good enough as long as Boko Haram members are still killing innocent Nigerians.

He made the assertion during the 2022 Armed Forces Remembrance Day Ceremony in Port Harcourt on Saturday.

Wike called on President Muhammadu Buhari to redouble efforts in fulfilling his electoral promise of ending insecurity in Nigeria.

“We acknowledge that some progress has been made in the fight against the insurgents.

“However, the generality of Nigerians believes that the progress made can’t be good enough insofar as Boko haram, its affiliates and the bandits are still active in the North-East, North-West and some other parts of the country, killing, maiming and kidnapping helpless people, including school children, and destroying and displacing hapless communities.

“We, therefore, call on Mr President to redouble his efforts and fulfil his cardinal electoral promise to secure the country and ensure that Nigerians feel safe and remain safe and secure wherever they are in their own country.”

Governor Wike further stressed the need for the Federal Government to make equipping  the armed forces a priority.

He also announced the donation of the sum of N50million as a support fund that will help widows of the fallen heroes.