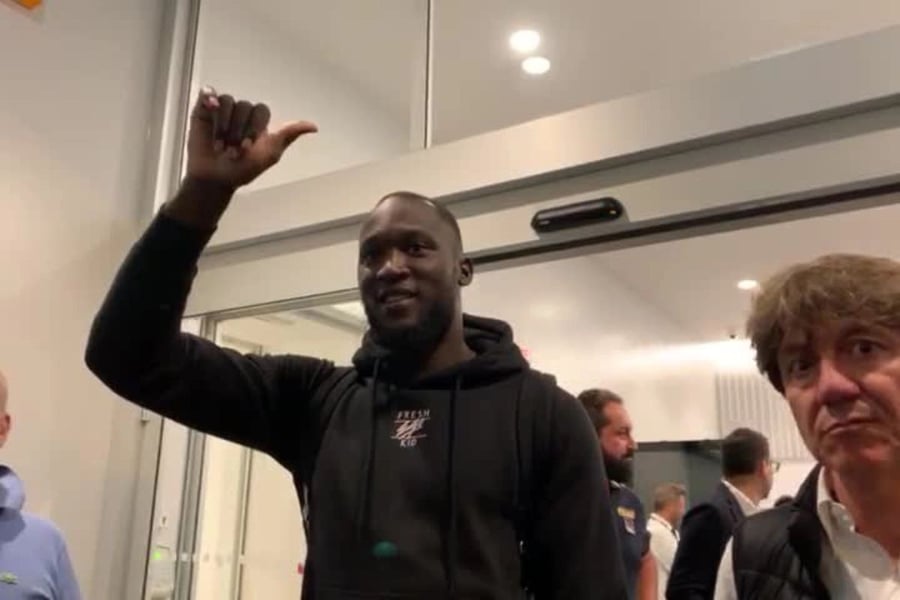 Romelu Lukaku said he was "very happy" to be back after the Belgian international striker arrived in Milan on Wednesday ahead of his return to Inter Milan on loan from Chelsea.

A beaming Lukaku emerged from Linate airport in the early hours of Wednesday morning and gave his short but delighted response to the handful of reporters awaiting his arrival.

According to transfer expert, Fabrizio Romano, the 29-year-old will undergo a medical later in the day before making his long-awaited Inter comeback official.

Romelu Lukaku, on his way to undergo medical tests in Milano this morning then Inter will announce the deal completed with Chelsea on loan until June 2023. ??? #CFC

Chelsea agreed to a reported deal in which Inter will pay an initial eight million euros ($8.42 million) plus a further potential three million euros in bonuses for the loan.

Lukaku will again lead Inter's attack as they attempt to regain the Serie A title after taking a pay cut – a reported 8.5 million euros for the coming campaign.

Lukaku leaves London after failing to make an impression for a second time at Chelsea, not meeting high expectations following a £97.5 million move from Inter last summer.

He had made himself a fan favourite over two years at Inter after scoring 64 times in 95 games and driving them to their first Serie A title in over a decade, the 2021 Scudetto ending both an 11-year drought and Juventus' grip on Italian football.

However, the financial problems of Inter's owners the Suning Group, exacerbated by the coronavirus pandemic led to coach Antonio Conte leaving the club almost as soon as the title was won.

He claimed the cost-cutting required by Inter would have prevented him from building the team he wanted to challenge domestically and in Europe.

Lukaku followed Conte out the door after then European champions Chelsea offered a whopping sum which eased some of Inter's financial issues, and started well on his return to Stamford Bridge.

Coach Thomas Tuchel said "he was the type of guy we were missing" after he netted four times in his first four games, but his next goal didn't come until early December and injury, Covid-19 and poor form kept him out of the team.

He then infuriated Chelsea fans by conducting an interview with Sky Sport Italia in which he expressed his unhappiness and said he had Inter in his heart and wanted to return.

Those comments also led Inter's hardcore ultras to say they weren't interested in having him back, considering his move to Chelsea a betrayal of his claim to love the Milanese club.

They told other fans not to arrive en masse to welcome Lukaku back as he is now "just one of many" after previously being "treated like a king" by supporters.

Lukaku will be critical to coach Simone Inzaghi's bid to snatch back the league crown from AC Milan after they finished two points behind their local rivals last term.