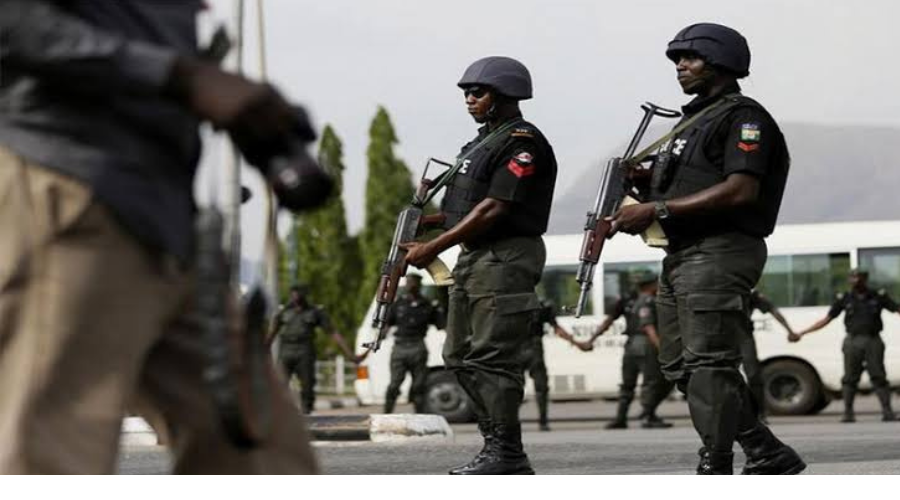 A heavy presence of security personnel was beheld at the entrance of the Abuja Municipal Area Council Monday as tension heightens following a Tribunal judgement upturning the victory of Christopher Zakka of the Peoples Democratic Party (PDP) at the February 12 FCT Area Councils polls.

Security personnel deployed from various security agencies were seen searching thoroughly staff and visitors to the secretariat in area 10 while also monitoring movements around in a bid to forestall breakdown of law and order.

The election tribunal sitting in Abuja had on Friday, the 5th of August awarded the February 12 AMAC chairmanship contest to Murtala Karshi of the All Progressives Congress having been convinced that the APC candidate polled more votes at the election.

According to the judgment, Murtala Karshi of the APC polled over 21,000 votes against the 13,249 declared as his result by the Independent National Electoral Commission, while Christopher Zakka of the PDP scored 19,302 votes making Karshi the valid Chairman of AMAC.

Their celebrations were however short-lived as the Area Council Election Tribunal in the election to the office of the Chairman, Abuja Municipal Area Council, Federal Capital Territory ordered a Stay of Execution on the judgment delivered by the Tribunal between the AMAC Chairman,  Christopher Zakka of the PDP and his challenger Murtala Karshi of the APC.

This followed a Motion on Notice brought in pursuant to Section 143 (1) of the Electoral Act 2010 as Amended and Section 285 Sub Section (7) of the Constitution of the Federal Republic of Nigeria 1999 as amended by the Respondents, Christopher Zakka and the Peoples Democratic Party.

Subsequently, the Tribunal granted the Stay of Execution pending the determination of the Appeal filed against the said judgment at the FCT Area Council Election Appeal Tribunal.

In another development, an Abuja-based Civil Rights Activist under the aegis of the Abuja Grassroots project has called on the FCT Minister, Mohammed Bello to respect the decision of the Area Council Election Tribunal that has ordered the Stay of Execution as regards the earlier judgement delivered by the Tribunal sacking the AMAC Chairman, Hon Christopher Maikalangu.

Addressing the group who protested along Airport road and Apo Resettlement Village in Abuja, Comrade Yunusa Yusuf, warned that any action that would further offend the sensibility of the peace-loving people of the Federal Capital Territory by trying to please the desperation of some self-imposed godfathers and moneybags from the ruling APC, would be seriously resisted.

Speaking against the backdrop of heightening tension creeping across the twelve electoral wards of the municipality occasioned by the three-member FCT Election Petition Tribunal judgement, Comrade Yusuf said that "the judgement was largely croookish, outlandish, incredible and ripping.

"We, the people of FCT, will not accept the dethronement of a legitimate government until the determination of an appeal already filed by lawyers of the incumbent Chairman of AMAC, Christopher Zakka Maikalangu."

Yusuf further warned the FCT Minister not to contemplate acceding to the inordinate desperation of what he described as  "political jobbers and exuberant political players who see power as man made and as such, do not seem to play the game according to the rules believing that money is an end to clinching power by buying the judiciary".

He said that thwarting the victory of Maikalangu and transferring it to "usurpers and desperados" will not augur well for the people".

Speaking further, he demanded that the Independent National Electoral Commission (INEC) and the FCT Minister should respect the Stay of Execution Order obtained by Hon. Zakka's counsel.