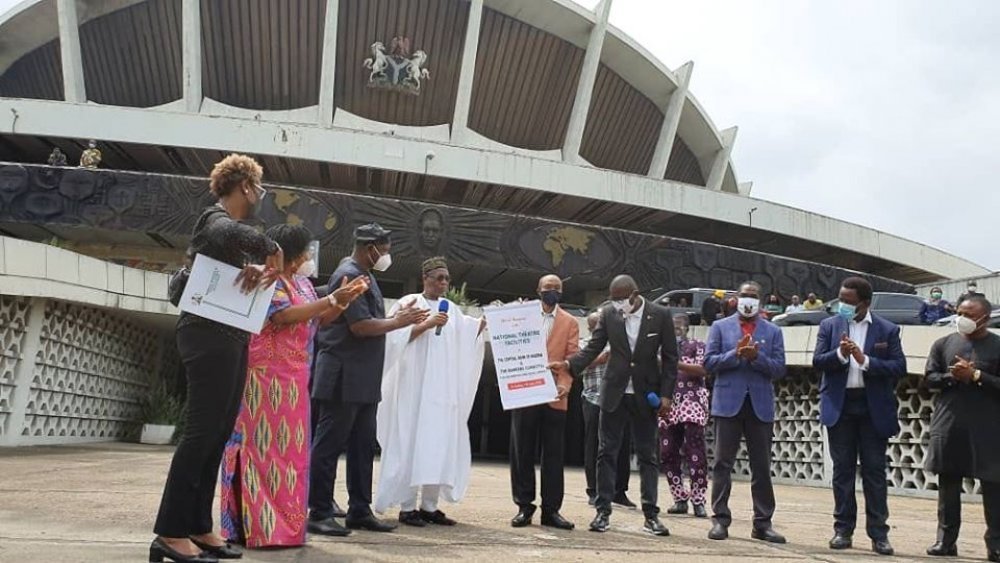 Days after AllNews reported that two firms are willing to confront the Central Bank of Nigeria (CBN) and the bankers’ committee over the takeover of the national theatre, the Minister of Information and Culture, Lai Mohammed, has revealed the reason the Federal Government handed over the national theatre to the banking Industry.

“For more than 43 years, there has been really no serious renovation as a result of lack of fund by the government and the edifice is in a sorry state. Several attempts to privatise or concession the edifice either before or during my tenure as minister has failed, and the truth of the matter is that government has no money to embark on the renovation.

“Therefore, when the CBN made the offer, we saw it as a golden opportunity to return the national theatre to its glory days.” Mohammed said during an interview with Radio Nigeria. His statement comes days after AllNews reported that the national theatre was initially awarded to two companies after different bidding rounds.

The National Theatre might remain under lock for long after two companies, Jadeas Trust and Topwide Appeas took action against Nigerian banks and the Central Bank of Nigeria (CBN) due to the takeover of the National Theatre by the banking sector, which is against an ongoing court battle.

The government had handed over the keys of National Theatre to the CBN despite the controversy surrounding the structure. In 2007, Jadeas Trust had been selected as the most preferred bidder after the initial preferred bidder, Infrastructica Consortium, couldn't fulfill the sale conditions.

But like every other project in Nigeria, the bidding process was declared inconclusive due to a change in government. Another bidding round was conducted in 2013 after the National Council on Privatisation (NCP) adopted a private-public partnership model for the National Theatre.

Topwide Appeas was selected as the preferred bidder, receiving approval on August 4, 2013, from the Federal Executive Council. However, Jadeas Trust filed a lawsuit to protect its interest, fighting that the previous dealings with the Bureau of Public Enterprise (BPE) was binding by contract.

The case was, however, settled with the intervention of Vice President Yemi Osinbajo and the Minister of Information and Culture Lai Mohammed, both of whom were in a stakeholder meeting on October 12, 2016. Jadeas Trust and Topwide Appeas later agreed to work together on September 5, 2017.

They both signed a memorandum of understanding in April 2019. The BPE and Infrastructure Concession Regulatory Commission (ICRC) reportedly endorsed the MOU.

Is FG Hiding Something From The Public?

According to Aina, if the National Theatre project is handled by Jadeas Trust, FG won't have to provide any fund despite being a private-public partnership. She revealed that the World Bank had already offered grant to the firm for the National Theatre, and there's a development agency willing to financially support the project as well.

Aina stated that the plan will not cost the government a dime, “They are saying that they are going to spend N25 billion on a facelift, our own transaction is completely not going to cost the federal government any money,” she said, adding that, "Even for the national theatre, there is a development agency that has said as long as they have seen our plans, they would fund the renovation. We even got a grant from the World Bank before.

“We have built up a public-private-partnership. With the World Bank, different agencies are ready to fund it without costing federal government any money.” She told The Cable. Aina further stated that the plan is to build a 55-hectare creative industries business park and a trade centre on the land surrounding the national theatre, as well as a 3,000 capacity creative industries university.