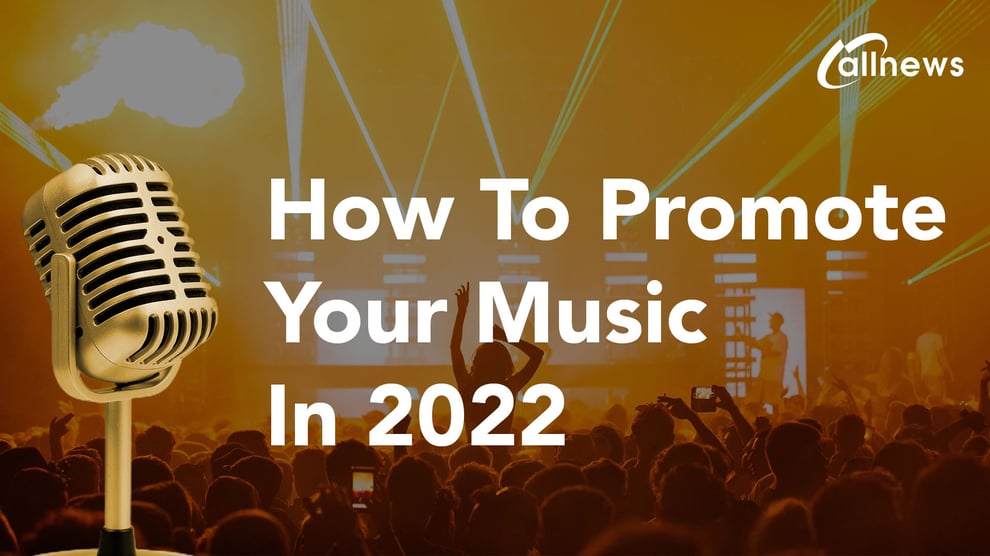 Making the most of your musical talent can help you earn enough money but many talented new musicians just don't know where to begin or how to run an effective promotional campaign in 2022.

Promoting your music across several platforms has been made easy and lucrative with the introduction of technological advancements and the rise of social media.

However, relying on technology and social media to promote your music is insufficient. In 2022, you need to take these simple procedures

Excellent music is needed to get things started. In a world where amazing and ear-catching music is pumped out on a daily basis, if your song, EP, or album isn't well-written, instrumentally tight, and professionally produced, it won't be taken seriously.

What should you do to write a song with a wide potential audience?

You might believe that you need the most costly equipment or the most luxurious studio, or that you need to spend a fortune on good plug-ins. Stop. Don't be fooled by the lies. Even if you don't have a lot of money, you can make good music.

The first thing to consider in making a high-quality production is by choosing a Music Production Computer, Choosing the Best DAW for You, Locating a sound interface, Setting up your microphone correctly, Choosing the appropriate headphones or monitors, and Creating a recording studio in your house, Obtaining no-cost plug-ins, Finding low-cost services to investigate.

You can find beats on Twitter, Facebook, Instagram, Fiverr, Upwork, and other platforms if you don't have the financial means to set up your personal production studio.

For example, the song "Ameno remix by Goya Menor ft Nektunez" is a great example of finding a great music producer online and producing a fantastic song.

The songwriter/musician is from Benin City, Edo State, Nigeria, and the music producer is from Ghana. They met via social media.

So, first and foremost, get a great song, because without it, everything you do will fail, or to put it another way, will not last.

When most musicians think of promotion, they think investing money in CDs, posters, vinyl records, tees, and stickers, makes less and less sense as the majority of recorded music consumption now occurs digitally.

However, if you are solely using the internet, you may be passing on a lot of opportunities to connect with your target audience.

Although it may appear that the entire globe lives entirely online, billions of people use real venues to work, shop, socialise, and travel every day.

In big cities like Lagos, New York, and London, traditional methods of music promotion (banners, posters, and stickers) are still effective in spreading the news about a new record or event.

This traditional method will assist you in telling people about your music in a creative way and placing your name at the forefront of their minds.

One of the most strategic and deliberate actions you can do to promote your music career is to include a major artist in your new single release. It will strengthen your brand and, with the right hit, might propel you to stardom.

Olamide, a Yoruba rapper and well-known Nigerian afrobeat singer, was featured in a song called "Zazzu" by Portable in 2021. The song elevated his international profile almost immediately.

As an independent musician, developing a great social media strategy is the most important step to take, and it cannot be overstated.

A solid social media strategy should explicitly describe your social media aims and objectives, as well as your deliberate planned attempt to get your music in front of your target audience and the method you'll use to evaluate your progress and growth.

There's no denying that good music demands expertise, yet some performers stop there.

Social media provides orchestras and artists with a tremendous platform for audience interaction and music promotion.

Make sure you have an active social media account where your fans and potential fans can contact you to stay in touch.

Maintain contact with your listeners, particularly those who are new to your music. They must be able to detect your presence and hold you in their hearts.

Ckay, the singer of "Emiliano" and "Love Nwantiti," for example, has active Twitter and YouTube accounts and regularly tweets and posts. This adds to the intrigue. Fans will always rally behind you and, if necessary, offer advice.

This will let your fans know when you're working on new music or about to perform. Simply stay in front of your fans, particularly those who are on the fence about becoming supporters.

Davido, for example, keeps his fans engaged by routinely updating his social media sites with both music and non-musical stuff.

"Building a music country in which you are the president" is what it's called.

When musicians don't take their music to the stage, they miss out on a huge opportunity to connect with their listeners and leave a lasting impression.

Make every attempt to book as many performances as possible. Gigging is beneficial for obtaining new followers, earning money in the music industry, and allowing your lovers to see you and see your performances, so book as many as you can.

Assemble a team to assist you

Most crucial, assemble a group of people that are enthusiastic about your music and believe in your abilities as a performer.

Get yourself good management, publicist, or backup DJ, as well as anyone else you can afford. This group makes sure you're marketable and a brand that people and businesses can rely on. It follows that your chances of succeeding will improve.

Hundreds of musicians have signed up to use these platforms to advertise their releases.