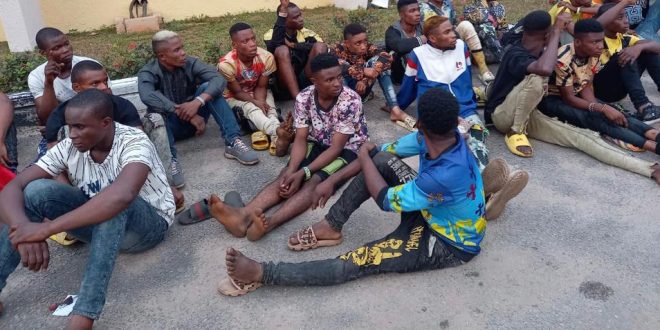 Operatives of Community Vigilante Security Network in the Edo State has rescued 28 victims of human trafficking in Benin City.

The state coordinator of the outfit, Oboh Emmanuel Otoide, disclosed this while addressing journalists during the weekend in Benin City.

He said the victims who were between the ages of 13 and 17 years were rescued during a stop-and-search operation by his men.

“The victims were rescued by our men around 2:00 am on Tuesday along Akpakpava Road in Benin City. Three suspects, including two drivers conveying the victims to their destination were arrested during the operation and handed over to the Department of State Services for further investigations.

“Our preliminary investigations revealed that the victims were being moved from the Southeastern route to Edo State to the South West of the country,” he said.

He added that in another operation, officials of the Edo State Community Vigilante Security Network arrested a man who robs people of their personal belongings while pretending to be insane.

“The man who identified himself as Olatunji was arrested around Baptist Church at Ring Road, Benin City and has been handed over to the Nigeria Police Force. Among the items recovered from the suspects include ATM cards belonging to victims of his criminal acts,”‎ Oboh stated.

He disclosed that the group is working assiduously with other security agencies in the state to secure the state.