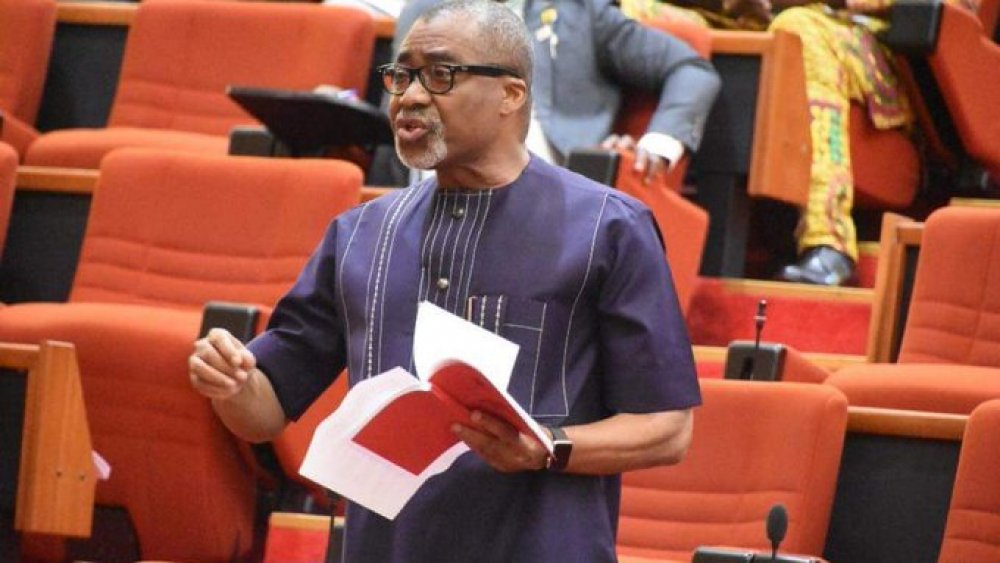 The Senate Minority leader, Senator Enyinnaya Abaribe on Thursday said that he advocates Biafra of the mind and not Biafra of territory, arguing that people of the various ethnic nationalities could develop their areas at their pace and still be happy in a united Nigeria.

Secessionist movement like the outlawed Indigenous People of Biafra (IPOB), and the Movement for the Actualization of the Sovereign State of Biafra (MASSOB), associated with Igbo nationalism, are canvassing for the recreation of an independent state of Biafra.

Delivering a keynote address at the Bar Week of the Awka branch of the Nigeria Bar Association (NBA) in Anambra State, Abaribe condemned the increasing wave of killing of security operatives and burning down police stations in the South East, describing the action as barbaric.

The senator, who represents Abia South senatorial zone said: “Whenever we talk of restructuring in the national assembly, some of our colleagues from the north will say, is it not for you to have Biafra? Yes, I want Biafra, but I want Biafra of the mind, not Biafra on land. I believe that people can develop their areas in a properly restructured Nigeria.

"We in the South East can be the richest part of Nigeria through our hard work.

“I don’t believe we can get what we want through anarchy. We can get what we want by doing the needful, which is encouraging ourselves to participate in the planned constitutional amendment. It is better for us to make Nigeria a more conducive place to live in, than this blood we are spilling every day. If things are not working properly, there will always be agitation.

“However, while we all accept that it is necessary to tinker with the structure of our country; we must agree that the immediate cause of our woes is injustice and inability to manage our diversity by the present government.

“I think that the inability to undertake some critical thinking may have led some of us to see the term restructuring as a silver bullet that will solve all of Nigeria’s problems. Can we say that it is the structure of our polity that has made different arms of government abdicate their constitutional responsibilities?

“For example, discipline, recruitment, and promotion in the judicial arm is vested in the National Judicial Council, NJC, while another arm of government, the Executive, took it upon itself to remove the head of the judiciary against the stated procedures laid out in the constitution, thus breaching the law. Would we argue that it is the fault of the structure?

“It now seems to us that we have been put in a catch-22 situation. We seem to be going round in circles. The government says to anyone that wants restructuring – Go to the national assembly as the body empowered to amend the constitution.

Abaribe recalled that at a critical point in 2010, there was ‘doctrine of necessity' when the nation was also at a crossroads, adding that there is a need for the same national assembly to, at this critical juncture, undertake the task of restructuring the current constitutional document.

READ ALSO: Kalu’s Brother Made Me Swear At A Shrine – Abaribe

He added: “I was part of the group called Nigeria Good Governance Group in the senate. We were about 11 and we were meeting to find a way so that the lacuna on the ground than could not create more problems in the polity. The climax was when we got a budget purportedly signed by the sick president, Umaru Yar ‘Adua and we said we could not continue like that.

“All the governors came to the national assembly and resolved to apply the doctrine of necessity, which led to the amendment of the constitution that after three weeks of the absence of the president, the vice president automatically takes over.

“Today, we are in a bigger problem, including the problem of Boko Haram, Banditry, which I believe is Boko Haram that graduated to banditry, Fulani herdsmen and the problem in the South East where people go about burning police stations.

"So, I think the national assembly, the governors, and well-meaning Nigerians should come together and apply a doctrine of necessity 11.

"Since we did one during Yar ‘Adua presidency, we can do a second one to help the country.

"They go further to ask if it means the dismemberment of Nigeria.

"With all due respect, those who ask those type of questions do not mean well for Nigeria.

"We cannot afford to be limping along as we are doing today that is leading us to the precipice.

"Something must be done constitutionally and that is to amend the constitution to resolve the issues of today.

“We have to instill confidence in the polity by reflecting such things as state police.

"Devolution of powers and Fiscal federalism in the amendments. Essentially it means to amend parts 1 & II to move certain items from the Exclusive to the Concurrent list to give more legislative powers to the states.”

He held that a nation that does not respect its laws simply provides the breeding ground for mutual suspicion, ethnic agitations, and insurgencies as it is currently in Nigeria.

“All these former Presidents were conscious of our diversity and tried very much to manage it to everyone’s benefit. Can we say that of the present administration?. Your guess is as good as mine,” Abaribe stated.