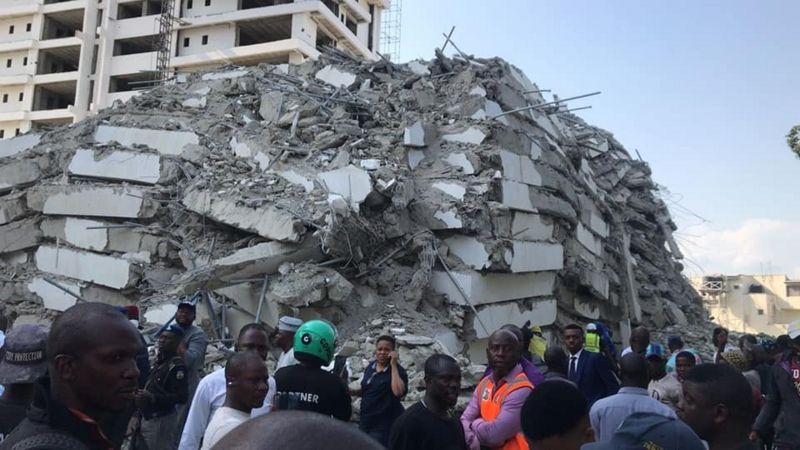 A Structural Engineer, Muritala Olawale, has narrated how Fourscore Heights altered a four-storey building plan to the 21-storey building which collapsed on November 1 at Gerrard Road, Ikoyi, Lagos.

The News Agency of Nigeria (NAN) reports that Olawale, Managing Director of Prowess Engineering, made the revelation while responding to questions from Akin George, counsel for Lagos State Government.

According to Olawale’s statement on oath to the inquest, the late Femi Osibona, Managing Director of Fourscore Heights Limited, had in November 2018 briefed his team that he wanted to build four-storey buildings of three blocks at Gerard Road, Ikoyi Lagos.

He noted that while working on the design, Osibona reversed the brief to three blocks of 14-floors (ground plus 13 suspended floors).

Questioning the witness, George said “in paragraph 20 of your Witness Statement on Oath, you said and I quote “Construction works on the three blocks commenced simultaneously with piling works.

“On conclusion of the piling works, Pile Integrity Test (PIT) carried out on the piles showed failure in 23 of the piles installed and we recommended that the failed piles be replaced.’

“Mr Olawale, which of the blocks were you complaining about’’.

Responding Olawale answered, “My complaint was on Block B, the collapsed building.”

The witness said that in the course of replacing the failed piles, Osibona requested that Block B be re-designed to 18 floors (ground plus 17 suspended floors) and his team received a reversed architectural drawing.

“When we redesigned the building to 18-floors I was told by Osibona that he took the design to the government for approval but I did not see the approval.

“The architects of the building site were Urban Prime Architects,” Olawale said.

George noted that in standard practice, a building approval would always be on a construction site as a reference point during construction. He queried if that was the case with the construction at Ikoyi

“We were only working on-site with copies of our drawings and not the approval,” he said.

Olawale said that Osibona was solely in charge of the approval process for the three blocks and that his team based their judgment while working on the site on Osibona’s instructions.

Olawale said that Osibona, who was his client, also doubled as the contractor and builder of the project.
“We are there to supervise. Whatever he says to us to do we will do provided it is within the guidelines of the engineering practice,” he said.

The three high-rise buildings which were situated at Gerard Road, Ikoyi, Lagos, Block B (21-storeys) collapsed on November 1 killing 46 persons while 15 persons were rescued alive.