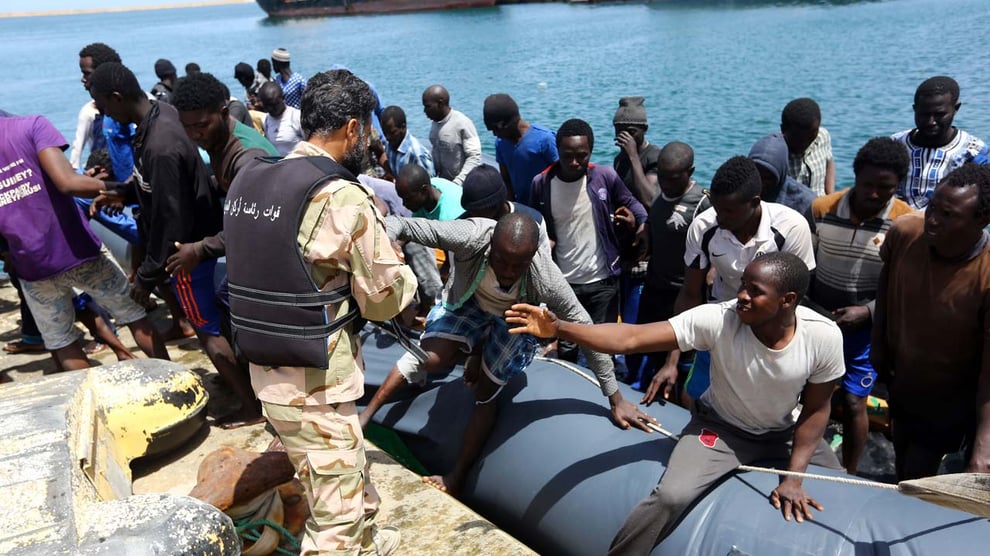 According to the National Migration Policy (2015), illegal migration includes sophisticated, high-risk, daring and evasive ways to enter Europe and other parts of the outside world.

Africa is often seen as a continent and one of the driving forces of mass illegal migration to Europe and other continents.

Many of these are cited to be caused by poverty, violent conflict, starvation, and job opportunities.

In recent years, illegal migration from Africa has received extensive attention as desperate Africans flee their country in search of life abroad.

African countries such as Nigeria, Ghana, Morocco, Senegal, Libya, South Africa and many others have long been at the forefront of the trade of illegal migration, as they have been a link and channel of passing over thousands of people eager to move to the other continents.

African men and women risk everything, including their lives, to take on the trip across many borders and the strong waves of the Mediterranean Sea in search of getting abroad.

While on the course of the journey, some die, some are turned back and some who finally get down to the destination realise a harder life awaits them.

As they get few jobs, they go on the run from law agencies and some may even turn into maids and slaves.

Through countries like Libya, Morocco and many northern parts of Africa, Africans have found it a signature move to try and flee their country, the continent, hoping to move across borders and try and settle in neighbour countries in all hopes of moving abroad.

But the illegal nature of the move lands them in bigger trouble.

Libya has traditionally been relatively easy to access for illegal migrants into different countries. As noted, in past decades, the country served as a popular destination for migrants seeking employment.

The majority of those who do all they can to travel abroad illegally saw Libya as a temporary stop along their route to the desired destination of Europe. Thus, one of the major pulls of Libya is as an access point to Europe.

Libya on another part is a very unstable state where militia groups often kidnap migrants and hold them hostage.

But still, these migrants still pass the route.

So in all honesty, it is as a risk of it all that those who chose to travel still travel through the route, even when knowing the risks it brings.

According to a 2018 report by the International Organization for Migration (IOM), there were over 600,000 migrants in Libya and over 9,000 migrants were being held in official detention centres, while thousands more were detained by armed groups in unofficial centres.

Also, by the evidence of the 2017 CNN report which exposed the abuses of Libya, it could be argued that the slave markets of Libya exist as a result of migrants.

Following the report from Libya in 2017, CNN had a video of slave auctions in Libya, and other reports have continued to emerge of migrants being sold by smugglers in slave markets across that country.

It was added that many of the migrants who end up in Libya are held in private detention camps where they may be sold for as little as 400 USD.

The International Organization for Migration also reported that Nigerians make up about ten per cent of the over 670,000 migrants in Libya.

Migrants are often exploited and abused by smugglers during their journey to Europe, most commonly in Libya.

As a source of irregular migration, Nigeria ranks very high both globally and in the African regions. The Economic Community of West African States (ECOWAS) reports in its Survey of Migration Policies (2016) that Nigerians account for over 300,000 individuals in the United States and the United Kingdom alone.

According to the Migration Enlightenment Project Nigeria (MEPN), as many as 750 migrants of Nigerian origin may have drowned in the Mediterranean while trying to cross into Europe in 2018.

The IOM’s Missing Migrants Project said over 800 people died trying to reach Spain by boat in 2018.

To avoid the dangerous sea crossing, some migrants are increasingly tempted to jump the heavily guarded border fence at the Moroccan-Spanish border.

And even if the migrants make it over the fence that separates Morocco from Spain, it is possible they will be returned directly by the Spanish authorities.

On many occasions, there here have been reports of migrants being returned to Morocco after their forced entry into Spain.

There are many risks associated with illegal migration. And travelling to the countries of Europe or elsewhere without a visa or other travel documents, and without passing legally through borders.

The journey of illegal migration is markedly risky, as migrants are vulnerable to exploitation from smugglers, kidnappers, death and being locked up.

The International Organization for Migration (IOM) claimed at least 2,299 people died in the Mediterranean Sea or went missing trying to reach Europe in 2018.

A 2017 study by UNICEF also showed that women had to rely on pay-as-you-go schemes with the smugglers, where the full cost of the journey is paid either en route or at the destination and often ended up in debt, becoming even more vulnerable to abuse and trafficking.

A study also found that almost half of the migrant women and children in Libya reported having suffered sexual violence and abuse on their journey.

Narratives from the misadventures of irregular migrants are a testament that the journey is a bad occurrence, and also, the practice of illegal migration is not only rampant in this part of the black world but worldwide.

Many Asian countries and South Americans also found it a trade to move to neighbouring countries illegally.