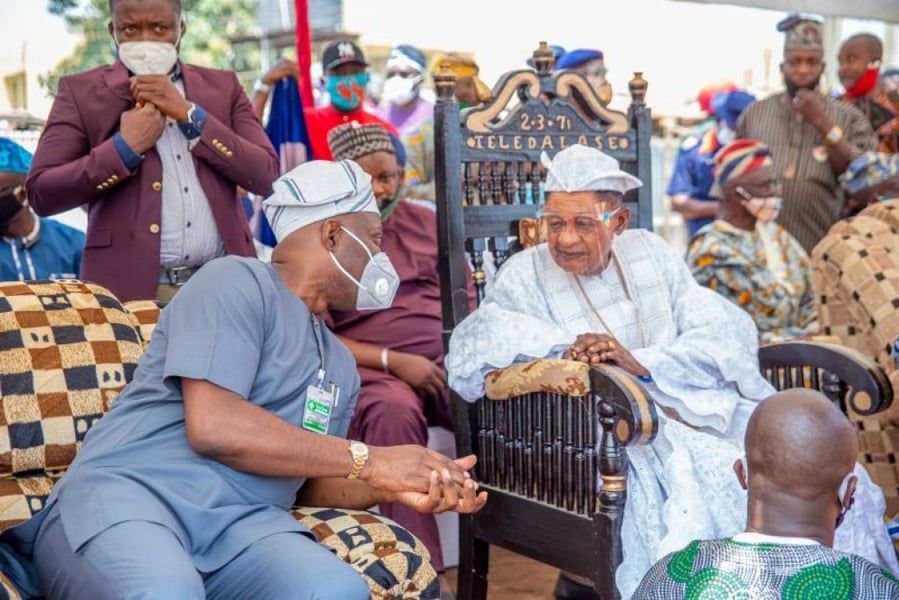 The Atiba Ruling House has called on Governor Seyi Makinde of Oyo State to implement the 1976 Report on the Alaafin of Oyo Chieftaincy Declaration.

The ruling house which comprised of nine royal families maintained that its implementation is a prerequisite for the appointment of the next Alaafin of Oyo.

They also revealed that the recommendations made in the report of a 1974 Commission of Enquiry and gazetted by the state government on July 16, 2001 should guide the governor in choosing a successor to the Alaafin throne.

Rising from a recent meeting in Oyo town, the spokesperson of the Adeitan/Atiba Royal Family, mMogaji Afolabi Ademola Adeitan revealed that based on the Alaafin of Oyo Chieftaincy Declaration as recommended by the then Oyo Divisional Council, the ruling houses in Oyo was limited to the Alowolodu (where the late Oba Adeyemi III hailed from) and the Agunloye (variously referred to as Ladigbolu or Gbadegesin) families.

"However, the nine other royal families, who also belong to the Atiba Ruling House, described the arrangement as illegal and contrary to the recommended amendment by the state government, to the Alaafin of Oyo Chieftaincy Declaration."

The nine royal families which frowned at what they alleged to be an attempt to sidetrack what has been gazetted by the state government, to serve as a guide in appointing a new oba for the ancient town implored Governor Makinde to be guided in appointing the next Alaafin of Oyo by looking into the recommendations contained in the 1976 Report and as gazetted by the state government on 16 July, 2001.

"Rather than two, as claimed by the Alowolodu and Agunloye families, 11 royal houses have a right to the throne and, with the first two having successively produced the last two Alaafins, the remaining nine royal families should be allowed to produce the next successor.

“It is very wrong and illegal to claim that we have just the Alowolodu and Agunloye families as the only two ruling houses in Oyo.

“We have one Atiba Ruling House, consisting of 11 direct descendants of Atiba.

“The Alaafin of Oyo Chieftaincy Declaration has been declared defective since 1976, just as the Oyo state government has since then, pronounced that the other nine royal families are equally entitled to producing successors to the throne.

“The report of a Commission of Enquiry, as attested to in a letter written to the then Oyo Local Council on 8 December, 1976, had declared the Alaafin of Oyo Chieftaincy Declaration defective, for failing to accommodate the other nine royal families.

“The recommendation contained in the 1976 Report of the Commission of Enquiry was equally accepted by the Oyo state government and was gazetted in the Oyo State of Nigeria: Gazette on 16 July, 2001.

“In the interest of peace, fairness, equity and justice, we hereby appeal to the Oyo state governor, ‘Seyi Makinde, to look into all these documents and act accordingly.

“All eyes are on the governor, Oyo Kingdom and the entire Oyo state, as we look forward to the appointment of a worthy 45th Alaafin of Oyo who will be acceptable to all,” Mogaji Afolabi said.

There has been an intense race for the Alaafin stool, following the passage of the 44th occupant of the throne, Oba Lamidi Olayiwola Adeyemi III, in April.