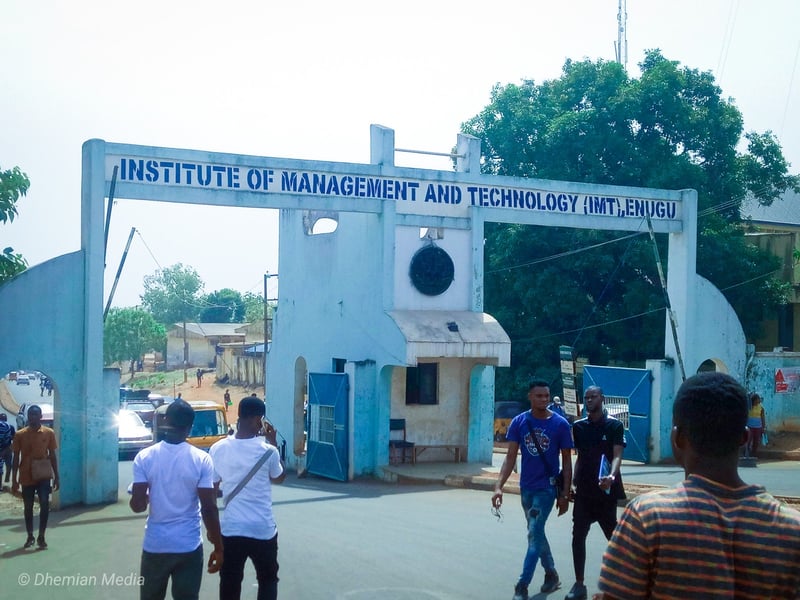 The management of the Institute of Management and Technology (IMT), Enugu has reacted to a viral video where students of the institution were protesting against increase in fees.

In a press statement released on Tuesday by Barr. Mark Akunna Eze, the school said the protesting students gave false information and distorted figures in order to being the school into disrepute.

"The attention of the Management of the Institute of Management and Technology (IMT), Enugu has been drawn to the protest by the incoming students on Friday the 13th of May, 2022 and the subsequent video circulating on the internet where these students gave false information and distorted figures on the new regime of charges in the Institute thereby putting the Institute in disrepute.

"It is against this background that the Management has decided to react and state as follows; that the school fees used to be ₦40,000.00 per student, per session of 12 calendar months.

"That the Institute had no option than to increase the fees as it had done because of the increasing huge financial burden before it.

"That the increment was a decision jointly taken by all stakeholders in the Institute including the students and staff unions and the increment is applicable only to newly admitted students.

"That increment became necessary for the Institute to be able to meet the increasing financial responsibilities that would further lead to its progress.

"That the Institute is currently the second-best state polytechnic in Nigeria queuing behind Polytechnic Ibadan as rated by the National Board for Technical Education (NBTE) in its latest ranking of all State Polytechnics in Nigerian.

"The State government as the Proprietor of the Institute cannot all alone raise enough funds to sustain let alone improve the quality of services being delivered by the Institute that has earned it the second-best State Polytechnic in Nigeria.

"That the Institute had maintained the old fees for many years and would not be able to cope again on its mandate of providing quality teaching and learning environment and by extension quality education to our students should it retain the old fees.

"That because of the restriction placed by JAMB, the Institute can only admit a limited number of students.

"Amongst others, this was the major reason why the Governing Council reviewed the fees payable to ₦80, 000.00 and later to ₦75, 000.00 after listening to the appeals made by both the National Association of Nigerian Students (NANS) and the Institute’s Student Union Government (SUG).

"That the new school fees of ₦75, 000.00 for the in-coming students only, had already been accepted by both NANS and SUG.

"That the current fees as approved by the Council and Management in consultation with the Student Union leaders is seventy-five thousand naira (₦75, 000.00) only  as against two hundred thousand naira (₦200, 000.00) claimed by the students.

"That the increment is inevitable and therefore should be seen as a necessary step to further consolidate the quality of education being offered by the Institute.

"That new school fees of ₦75, 000.00 is offer to the incoming students, which they either accept and be admitted into the Institute or reject and look for admission elsewhere.

"That hostels were renovated under Build Operate and Transfer (BOT) and the Governing Council attempted to make hostel accommodation compulsory to enable the school break even.

"That when the in-coming students started the protest, the Rector, Prof. Austin Uche Nweze (PhD) boldly intercepted the protesting students and announced to the admiration of many of the students, that the hostel fees and hence the hostel accommodation has become OPTIONAL.

"That many of the protesting students went back to school after listening to the Rector while a few of them with some miscreants still made their way to the Government House.

"His Excellency, the Executive Governor of Enugu State, Rt. Hon. Dr. Lawrence Ifeanyi Ugwuanyi promptly scheduled a meeting with the students and the Rector for 2pm the same day, Friday, May 13, 2022.

"That at the said meeting which was presided over by the Governor himself with the Deputy Governor, Her Excellency, Hon. Cecilia Ezeilo, all the issues were amicably resolved.

"That the success recorded in terms of building and renovating the infrastructures in the Institute wouldn’t have been possible without the intervention of the state government and other stake holders like TETFUND.

"That we salute the courage of his Excellency the Governor for his prompt attention and for letting this matter be laid to rest.

"That we use this opportunity to thank our amiable Governor and his Deputy for their prompt intervention and for resolving the issues amicably."