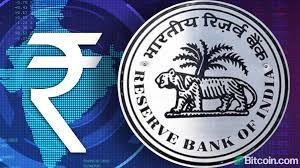 The Indian government has announced the upcoming launch of the country’s central bank digital currency called the digital rupee.

The country, which intends to follow in the footsteps of the Nigerian and the Chinese government in the launch and aggressive promotion of its digital currency, believes that this will enable the country to adopt blockchain technology and push large-scale adoptions amongst Indians.

The Finance Minister, Nirmala Sitharaman, made the announcement on Tuesday while presenting the federal budget 2022 to the Indian parliament that the Reserve Bank of India (RBI) will issue the digital rupee in the financial year of 2022/2023.

The minister stated that this would give a big boost to the country's digital economy and make the currency management system more cost-effective.

The minister said that the digital rupee will use blockchain and other technologies to run efficiently and will be issued by the Reserve Bank of India. The official introduction of the currency would be in either 2022 or 2023.

Another member of the prime minister's team, Piyush Goyal, who is the minister of Union Commerce and Industry, said that the digital rupee is a welcome development and would help in the efficient management of the nation's currency.

While speaking to ANI publication, he ascertained that the digital rupee would just be a digital format of the nation's legal tender and would function like any other digital currency in the world.

Meanwhile, the Indian government, which since mid-last year has implemented a series of measures to discourage its citizens from holding cryptocurrencies, has promised to implement the 30% tax penalty on such asset holdings in the country.

According to Piyush, "The government does not recognize private cryptocurrencies as legal tender. If people keep those as assets, they can rest assured that there will be a 30% tax on them. "

Private cryptocurrencies refer to any digital format cryptocurrency which is not backed up by the Reserve Bank of India (RBI), such as Bitcoin, Etheruem, and others.

The Finance Minister, also responding to questions about the 30% tax, said: "No deduction in respect of any expenditure or allowance shall be allowed while computing such income, except the cost of acquisition."

This move by the Indian government is just one of the many actions being carried out by central banks in the world as, according to the Atlantic Council’s Central Bank Digital Currency Tracker, 87 countries are now working on central bank digital currency.