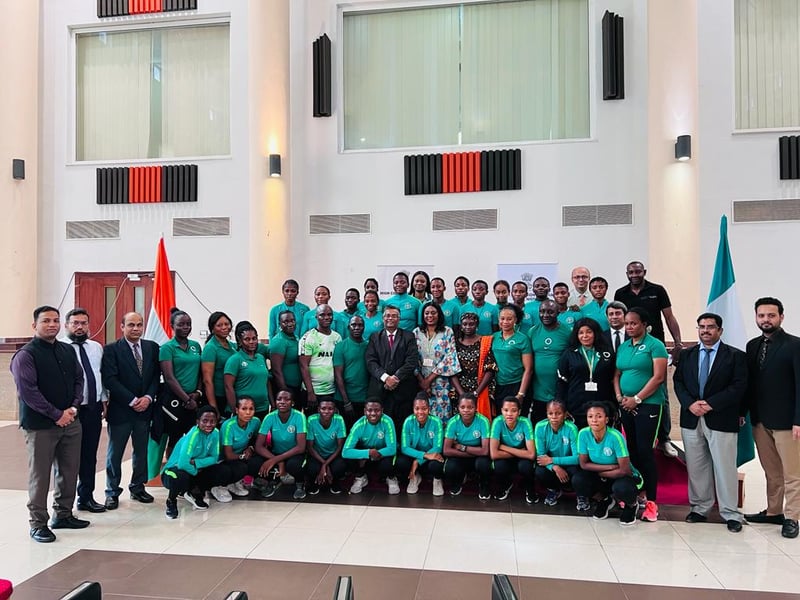 The High Commissioner of India to the Federal Republic of Nigeria, His Excellency Gangaharan Balasubramanian received players and officials of the Nigeria U17 Girls’ National Team, Flamingos, at the India High Commission in Abuja on Thursday.

Players and officials of the team, which will represent Africa at the FIFA U17 Women’s World Cup being hosted by India on 11th – 30th October, were on a visit to the High Commission to secure entry visas into India when the High Commissioner opted to have lunch with the team.

While receiving the team, His Excellency Balasubramanian expressed his excitement, saying: "I am very happy to see you all; it is indeed an honor to host you.

"I want to wish you the best of luck during the World Cup competition in India.

"We hope to see the next Oshoala and Ordega in this team.”

"On behalf of the President, Board, and Management of the Nigeria Football Federation, we thank the High Commissioner for this hospitality, and we want to assure you that the NFF appreciates your understanding and cooperation at all times that we require the same.

"The Flamingos are already looking forward to being in India and to savour the beauty of the country and also to put up a good attitude on and off the pitch.”

The Flamingos will battle it out with Chile, Germany, and New Zealand in Group B of the FIFA U-17 Women's World Cup.

Olowookere Bankole-led side will take on New Zealand on October 14 in their first match of the competition.