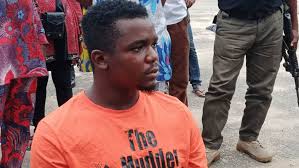 Miriam Akpan, the 7th Prosecution Witness in the trial of Uduak-Abasi Akpan, his father and sister over the alleged murder of 26-year-old job seeker, Iniubong Umoren, has told an Akwa Ibom State High Court sitting in Uyo, how the first accused person lured her with a fake job offer and then raped her.

Miriam Akpan, a domestic servant residing in Lagos, said she first came in contact with  Uduak Akpan on December 4, 2020.

She said she got a direct message from a lady, Blessing Lazarus, on a Facebook post about a job vacancy in Uyo.

She narrated: “She asked me if I can work in an integrated farm as a secretary and I told her yes. She told me she was not the one in charge but her manager; that she is only a cousin to the manager, and that if I should do well in the interview, the job would be mine.

“She told me that there is a duplex and that it has a black gate with an inscription ‘Beware of dogs and that there was a town hall opposite the house and a church beside it.

“I told her that where I was staying was far. She said they have a staff bus. I proceeded to call her manager. I called him around 2 p.m., on December 4, 2020, he didn’t answer the call.

“But he texted me immediately to tell me that he was at a meeting. I called him later and the manager told me to start coming for the interview.

“I pleaded with him that it was late, he didn’t say anything but ended the call. I contacted Blessing Lazarus, I pleaded with her to tell her manager to reschedule. She agreed that she will talk to him.

“On December 5, 2020, I received a call from the manager around 3 p.m. that I should start coming for the interview. I left immediately. On getting to Oron Road, I called him, he did not answer, he messaged me immediately to meet him at Ibiaku Junction.

“When I got to Ibiaku Junction, I called he did not answer. He sent me a message ‘pick a bike to Ibiaku Ikono Obio opposite the town hall, stop at the black gate.

“When I got there, Uduak Akpan came out. He said he was the manager. He sat down on the bench outside. He asked me to tell him the truth about what his cousin told me. I told him that she only told me about the integrated farm.

“He asked ‘Are you sure she didn’t tell you anything about drugs?’  I said ‘no.’ He then asked to what extent do I love money. And my answer was to any extent as far as it was legal.

“He asked whether I have any friend that has offended me that I wished dead. And I said no. He went ahead and said if I can bring my friend that whatever they will do to her will not be linked to me and that he will pay me handsomely. And I said no.

“He then said that means I don’t love money. He said in the integrated farm that they deal on drugs and that the government knows about it.

“He said that before he employs anybody, he has to test the drugs on the person. I pleaded with him. He said if the drugs were too much on me that there is tonic water that he will give me to drink that will flush the drugs out of my system.

“I was kneeling, begging him and he said if I want to go, I had to do as he said. He asked me if I gave anybody his phone number before coming, and I said yes. And he said I messed up. He said I should stand up immediately and take the drugs if I want to go. He then brought out three wraps of marijuana from his pocket.

“He told me that I need to help him, that he was high and he needed to have sex. I started crying and begging him, and he said if I want to go, I have to do it. After much pleading, I removed my trousers and he raped me in the process. I tried to escape. I screamed and immediately he got hold of me, he lifted me and entered the house.

“On getting inside the house, I saw a lady he called Emem and it was the same lady I spoke to on the phone. Then Emem said to him (Uduak Akpan), is that what they asked you to do? Uduak did not reply.

“I was still begging him to let me go and he now said I should undress completely. He brought out his phone and took a nude picture of me. After that, he said I should wait that he will call a bike to come and pick me up. He insisted that he will follow me on the same bike so that I will not raise an alarm.

“He dropped me at the Ibiaku Junction and he said if I mentioned it to anybody that he will track me down, that he knows where I am staying. So, I didn’t mention it to anybody.”

During cross-examination by counsel to Uduak-Abasi Akpan (first accused person), she told the court that she arrived at Akpan’s residence around 5 p.m., on  December 5, 2020, and left around 1 a.m., the following day.

Miriam Akpan further testified that she knew one Uduak Joseph Umoh, when she logged into her Twitter on April 29, 2021, at 10 p.m., and saw a picture of Uduak Akpan, alongside a caption with the picture of a missing person, Iniubong Umoren.

She said immediately commented, “This idiot raped me in December,’ Uduak Joseph Umoh messaged me directly and pleaded for the direction of the accused person house, which she obliged her.

She also said she didn’t inform the police about the rape because she was afraid of the threat by Uduak Akpan.

She added that she believed why he spared his life was because she told him that she gave out his number to some of her friends including one Ability Oscar.