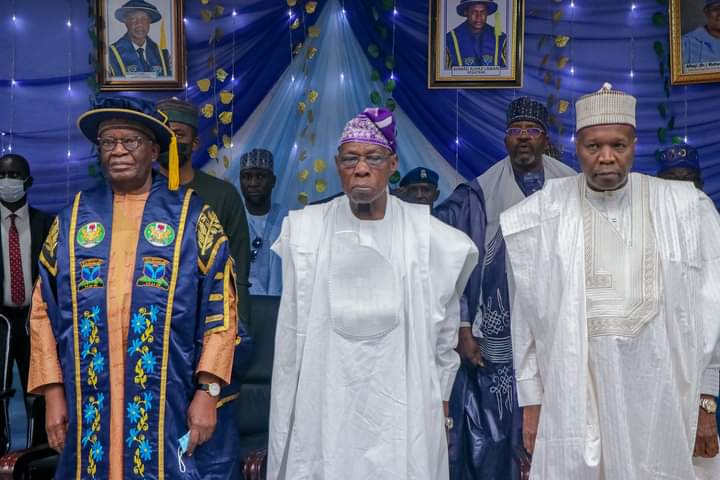 Indimi was honoured with Doctor of Letters (Honoris Causa) for his contributions to the institution and his efforts towards the development of education.

This was contained in a statement by the Director-General Press Affairs to the governor, Ismaila Uba Misilli on Friday.

Notable Nigerians present at the event include the president, Muhammadu Buhari who was represented by his Chief of Staff, Professor Ibrahim Gambari, the First Lady, Aisha Buhari and former president Olusegun Obasanjo.

Others include the All Progressives Congress (APC) Vice Presidential Candidate, Sen. Kashim Shettima, Inspector General of Police, IGP Usman Alkali Baba among others.

President Muhammadu Buhari, in his message as delivered by Gambari, noted that Indimi's support to the education sector both home and abroad.

He added that the honour on Indimi is a well-deserved one while describing him as a distinguished Nigerian whom has earned his name worldwide.

Gombe Governor Yahaya congratulated him while describing him as an iconic figure.

"The honour done to the philanthropist by the University of Maiduguri on the occasion of his 75th birthday anniversary was well-deserved and a reward for goodness.

"The Pro- Chancellor and Chairman of the governing council of the University, Ballama Manu said: "Alhaji Indimi has committed immense resources and built a state-of-the- art learning centre and conference facility in the University in addition to many contributions to the institution."

Manu further called on people to emulate the good virtuous of business mogul and philanthropist.